Ads help support our ability to provide you all our articles and papers at no cost to you. Thank you for your consideration and support.
Vectorworks

AR is an “obvious” fit for AEC, a realm in which there are “so many cases where you want to see a virtual model at scale in the real world,” said Dave Donley, director of product technology at Vectorworks. Just as a 3D presentation can often communicate design intent more effectively than 2D, AR goes yet a step further by incorporating design elements into the viewer’s actual environment, explained Alex Nicol, mobile team manager at Vectorworks.

With the new AR viewing mode, Nomad users can see full-scale Vectorworks models overlaid on their real-world settings (or scaled down, similar to a traditional tabletop architectural model; this video demonstrates both options). This perspective can help communicate the visual impact of designs to project stakeholders in an intuitive way, with no CAD or BIM experience needed. Users can position, scale, and zoom in on models with standard touchscreen gestures. 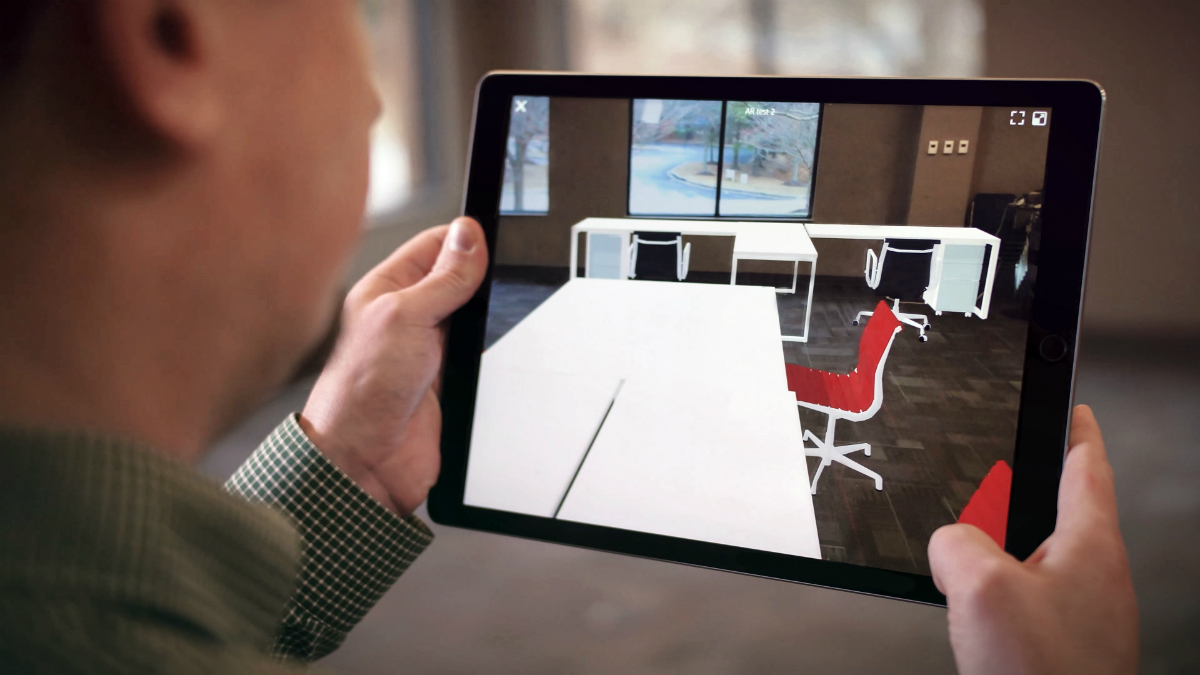 As a Vectorworks Nomad user holding a phone or tablet walks through an area, they can explore a model as if it were part of the environment, examining various angles and views as they reach different vantage points. In this example, models of office furniture are overlaid on the real-world empty office space. Image courtesy of Vectorworks.

These aren’t brand-new capabilities in the design world; what is breaking new ground, however, is the movement away from spendy, dedicated hardware for AR toward more affordable, widely available devices. “The great thing about where we’re at now is, this is consumer hardware,” stressed Donley. The AR experience no longer requires “exotic hardware” such as an external depth camera, he explained.

Nicol concurred: “There’s a huge AR boom happening because no one needs to buy anything, or if they do, it’s a $350 iPad.” In addition to the ubiquitous iOS devices, Donley pointed out the affordable dedicated hardware now entering the market, including Windows AR headsets in the $300–400 range.

“We’ve already seen this with VR,” Donley noted, likening the current simplification of AR to the advancements in virtual reality (VR) technology in recent years. Because Oculus Rift supplanted more expensive, cumbersome “90s-style” VR, “there’s no need to go down that road anymore,” he said.

The Right Tools to Join the Virtual and Physical

Modern mobile devices incorporate built-in cameras and motion-tracking sensors that enable AR apps to sense their surroundings, and the operator’s movement, so that models can be realistically incorporated into views of the real environment. And new hardware developments — such as the face-scanning TrueDepth camera in the iPhone X — hold promise for AR too. “That’s cute,” said Nicol, referring to the use of TrueDepth to create animated emoji, “but if they put the same scanner on the back of that device, it’ll be able to build models of the real world.”

For Nomad’s purposes, not just any mobile device will do: Although the app is available for Android and iOS devices, the new AR mode is currently limited to iOS devices that support ARKit technology and iOS 11. (ARKit is a set of tools from Apple to help developers create iOS-based AR apps.) Nicol estimated that only “20–30% of our users have an iPad that can run [Nomad’s AR mode],” so the team didn’t expect a great deal of adoption right out of the gate. Two weeks after release of the update, however, the app had logged about 1,000 AR sessions. “We’re really happy about it,” Nicol affirmed.

Less-expensive, more capable hardware is only one contributing factor in the current flourishing of AR; ARKit and similar tools have been an essential part of the equation. “With ARKit, [Nomad] senses the real world,” said Nicol, explaining that users don’t need to place reference markers on the ground in order for the app to function. “It tracks really well, and gives users the experience of modifying that space,” he explained.

Google has “a little harder time” with its ARCore toolkit, Nicol noted, because unlike Apple, Google doesn’t have control over the hardware that runs it. But the Vectorworks team is keeping a close eye on both: The competition between the Android and iOS AR platforms “is great for us,” said Donley, as it drives the continual addition of new features, such as detecting vertical planes. “Capabilities are being added as we speak,” he said.

Nicol commented, “It will be interesting to see what these big players [such as Apple, Google, and Amazon] do over the next few years. VR is important too, but they see AR as much more important in our day-to-day lives.”

The Vectorworks team is very clear that the AR offering is nascent. When ARKit was launched, the team realized “this is a segment of what we’ve been wanting,” said Donley, and was eager to start “swimming in that ocean” right away. The immediate goal was to provide value by presenting designs in an immersive way, in context, and at scale — surpassing what still renderings can offer, he explained. Ease of use is also much improved over older methods of communicating designs, he believes; even just controlling the angle with a traditional 3D viewer was “way more complicated than with AR,” Donley said. With Nomad, “camera controls are easy because there aren’t any, you just move the iPad around,” he continued.

One element that’s lacking at this stage is precision in anchoring models to specific real locations. “We’re not really there yet … it’s up to you to use gestures to put [the model] into place,” Nicol acknowledged. There is also no persistence between sessions, Donley noted, meaning the models have to be re-positioned each time a user wants to return to a particular space.

Going forward, the Vectorworks team is keeping close watch on the rapid evolution of ARCore, ARKit, and WebVR, a VR platform for web browsers. “It is moving very fast,” acknowledged Donley. The team also draws on everything from user requests to YouTube demos and their own experimentation with the technology to determine which features to tackle next, with a goal of delivering app updates roughly every three weeks. “We’re in this early and we’re listening carefully to what users tell us, but we’re going to respond quickly,” Donley asserted.