What Roles Do Graphics Play in Design and Engineering Software?


A quick point about both 2D/3D CAD and CAE: In engineering, models tend to be highly detailed, which means large model sizes. Whereas the gaming and entertainment world uses textures for detail, the engineering world uses triangles. For example, it’s not uncommon for a manufacturing model to use triangles to represent the threads of a bolt or hole. Since triangles are used to approximate and visualize these and other curved surfaces, complicated mechanical assemblies may produce tens or hundreds of millions of triangles, which place a significant management and rendering burden on the graphics system. In the CAE space, models tend to have low object counts but very high per-object triangle counts — possibly into the tens of millions. In the AEC world, by contrast, a model may have millions of objects, but each object might only have a dozen or so triangles on average, since many of those objects are composed of flat surfaces.

Each of these data domains requires different techniques in data management to ensure good performance. A good graphics engine will handle all of these scenarios. For the typical engineer, performance criteria go beyond fast frame rates to encompass short initial load speeds, snappy selection, quick highlighting, and fast transparency plus engineering-specific tools such as cutting planes for interrogating models, redline and markup tools, view management, and object editing.

Increasingly, manufacturers are validating parts throughout their manufacturing process, and this has spurred fast growth in the use of metrology applications. Metrology, the science of measurement, makes use of accurate mechanical probes and vision devices to validate that a manufactured part is within the tolerances of the part design. To display metrology data, software must be able to display the original model, which is often a 2D/3D hybrid that contains both the model and the manufacturing tolerances. Once measured, the results are displayed through sophisticated annotations on the 3D model. In many cases, users want to display annotations that include text and color-coded box plots displaying the results of the inspection. 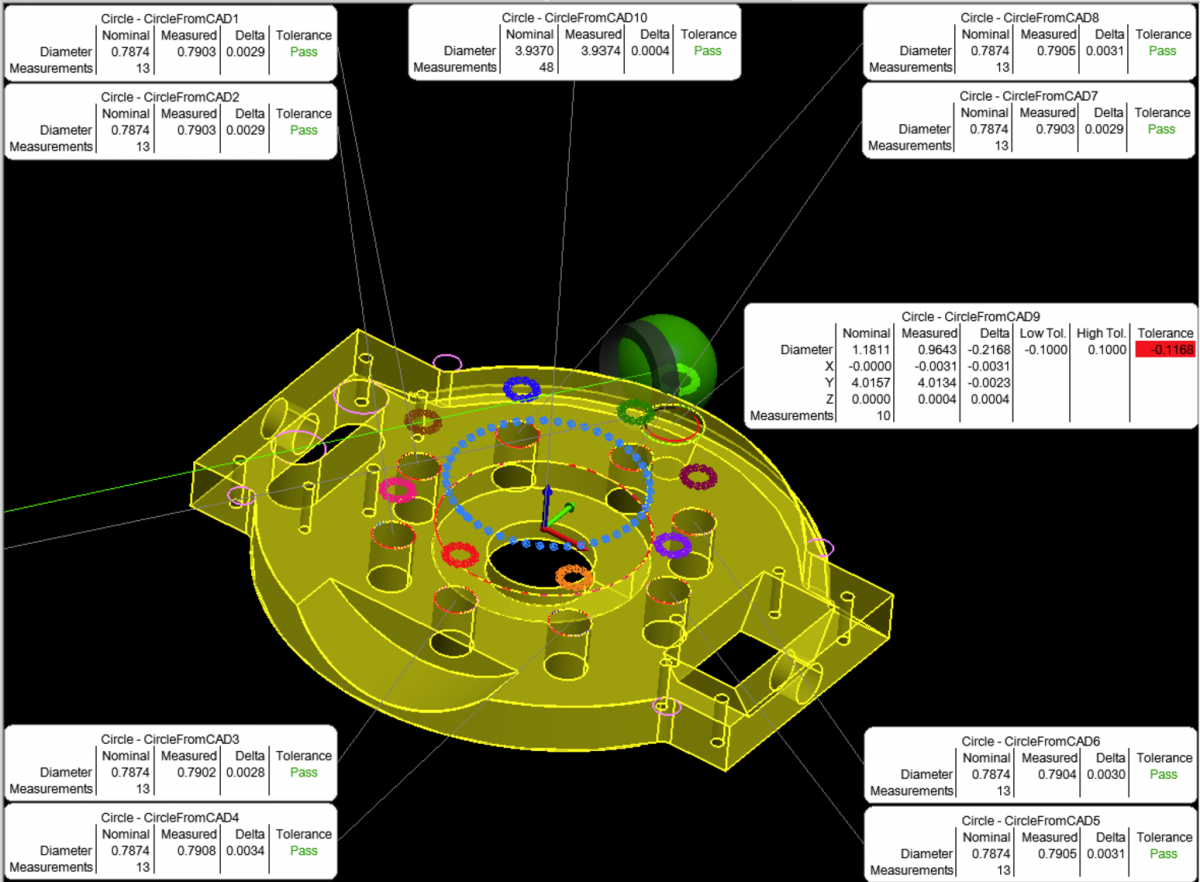 The needs of metrology software are heightened by the fact that optical inspection machines and laser scanners are now widely used, making the ability to display point cloud data important. Though point clouds are very simple in definition, they are difficult to deal with from a graphics standpoint.

The first complication is their sheer size: It’s not uncommon to see point clouds that comprise billions of points. Handling models of this size requires advanced memory management, meaning not all points can be loaded into memory, so an intelligent way of streaming data from disk to view at different levels of detail is required. Second, because the point data does not include information on how to shade the points, alternative methods such as eye-dome lighting (a shading technique designed to improve the appearance of depth in a rendering) are required for intuitive viewing of the data.

Side-by-side comparison of the same point cloud rendered with (left) and without (right) an eye-dome lighting shader. Image courtesy of Tech Soft 3D.

The world of engineering graphics today is stunning and vibrant — and tremendously complex. Although graphics work a little differently and play different roles across the spectrum of engineering applications, they’re not just there for aesthetics — they’re there to help users get their work done as effectively as possible. In the end, that’s the role that matters most.

About the Author: Gavin Bridgeman