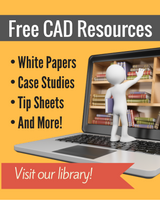 Ads help support our ability to provide you all our articles and papers at no cost to you. Thank you for your consideration and support.
November/December 2008 Table of Contents 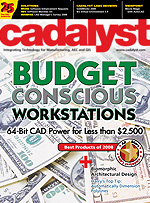 Features
techtrends
Designed after Our Own Image
By Kenneth Wong
Architects design a new type of building based on communal BIM.

viewpoint
A Design with Teeth
By Eddie Paul
With help from AutoCAD, the author built a fully submersible shark.

Cadalyst All-Star Awards 2008
By Nancy Spurling Johnson and Lisa McAdam
Cadalyst's editors pick their favorite hardware and software products of the past year.

mcadmodeling
Ask for What You Want
By Mike Hudspeth, IDSA
If you want your software to do something, ask the developer for it — your wish might be granted.

aecinsight
AEC Software by the Clock
By Jerry Laiserin
As time progresses, applications emerge, companies merge, and software gets better.

hottipharry
Happy Holidays and Happy Programming
By Bill Kramer
2008 goes out with a bang-up batch of 23 tips from Harry, including a Top Tip to cross-reference symbols and functions in your LISP code.
(December 2008)

learningcurve
Clipping Right Along with Xrefs
By Bill Fane
We continue the discussion started last month about the power of the mighty xref.
(November 2008)

learningcurve
A Stroll down the XREF Path
By Bill Fane
The third and final installment in the saga of the xref.
(December 2008)

autolispsolutions
Full-Fillet Three Lines
By Tony Hotchkiss
This bit of code lets you automatically fillet three lines by simply selecting them in clockwise or counterclockwise order.

bugwatch
Publish Pages Plentifully and Take a Stab at Stopping the Stickies
By Steve Johnson
When is 1 really 2 and 2 really 3? When it's an AutoCAD update number.
(November 2008)

archicadinsights
The Magic of Parameter Transfer
By Eric Bobrow
The Eye-dropper and Syringe tools allow favorite settings to be reused for similar parts.
(November 2008)

solidthinking
What Else is New in SolidWorks 2009?
By Richard Doyle
A look at some of the lesser publicized additions to the software.

A Closer Look at Autodesk's New FDO Providers
One is to remain in Autodesk's custody; another is destined for the open-source community.

Departments
editor'swindow
Brushing Up in a Down Economy
By Nancy Spurling Johnson
Jobless? Or just feeling uncertain? Take advantage of tools and training that can give you an edge.

industrynews
Breaking stories from around the industry.

discussionforums
Talk with your peers about CAD-related issues.