CAD in the Cloud Is Coming — Eventually

Jon Peddie Research and Business Advantage find that many CAD users aren’t interested in cloud-based CAD yet — but the shift has begun.


Almost every CAD vendor has plans for the cloud, but those plans vary from one to the next. Likewise, customers also have varying ideas about CAD-based workflows. At Jon Peddie Research, we have found that one of the problems underlying this inconsistency is imprecise definitions of terminology. Does CAD in the cloud (CiC) refer strictly to CAD work? Does the idea of the cloud include remote computing where the servers might be on-premises? Is the workflow totally on the cloud, or a combination of cloud and desktop? If we open up the question further — as we should — it becomes more complicated: What about product lifecycle management (PLM)? Analysis? Project planning? Collaboration?

Jon Peddie Research and the Business Advantage market research group worked together to create a CiC report combining a user-based survey with historical data and information from CAD vendors. What we found was a mismatch between customer expectations and issues and vendors’ plans: There are many ways to use the cloud, and vendors have many approaches to it.

For this first survey, we narrowed the questions to primarily CAD in the cloud, meaning CAD provisioned in the cloud, and the most positive response we got back from customers was for hybrid arrangements: CAD both in the cloud and onsite. According to the survey, CAD users are afraid their CAD data could be trapped in the cloud or even lost, and for that reason they want to be sure to have corresponding data updated on their desktop or their company servers. These findings are backed up by statements from CAD vendors, who are finding the same attitudes among their customers.

We are at the early stages of cloud-based workflows, especially for professional applications. The early models for cloud work, which include software as a service, known as SaaS (as used by Salesforce) and browser-based access (as used by SolidWorks, PTC, and Bentley Systems to varying degrees), may not be suitable for full-time use for professional CAD workflows. Indeed, the responses to the survey and additional research clearly reveal a population with mixed emotions about the cloud and the ways in which it might benefit their work. 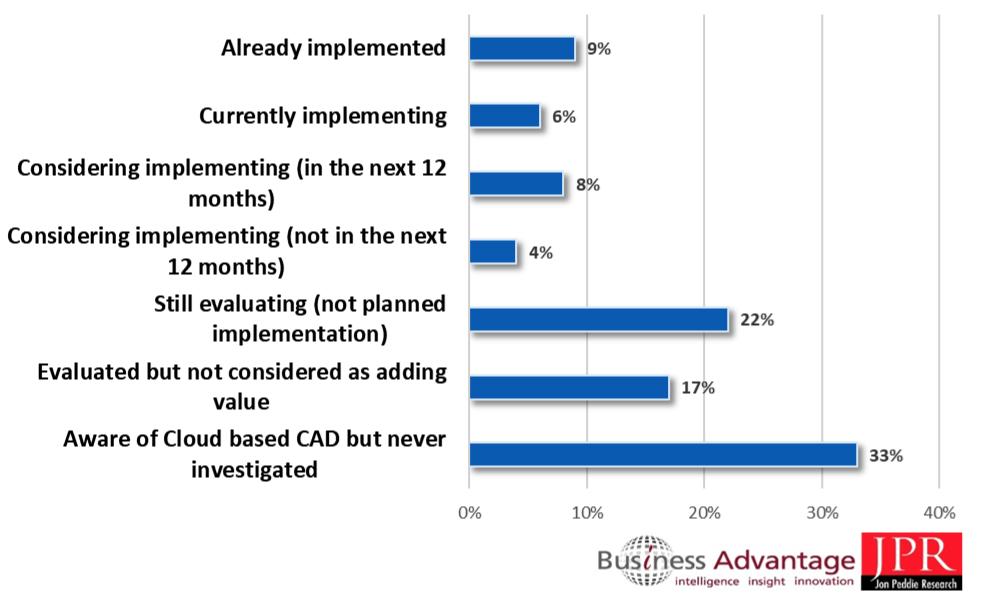 This should not come as a surprise; CAD customers are very protective of their data, and they are security conscious, but most of all, they are not a monolithic group.

Reflecting the makeup of the CAD community as a whole, the survey had a large proportion of Autodesk users. Autodesk users are very aware of the cloud because of Autodesk’s work on that front, making cloud capabilities free with subscription, and introducing Fusion, a pioneering CiC product. But, the Autodesk user base also includes groups slow to make big technology shifts. Most CAD workers work for small companies headed by CAD users who are also the IT managers. It’s often difficult to implement a new solution or workflow if you’ve already got your hands full keeping the technology you’re using up to date and running.

Conversely, the cloud can be a great equalizer for small businesses, helping them to scale and enabling them to implement capabilities such as PLM — something often seen as too demanding of small companies’ limited IT resources. 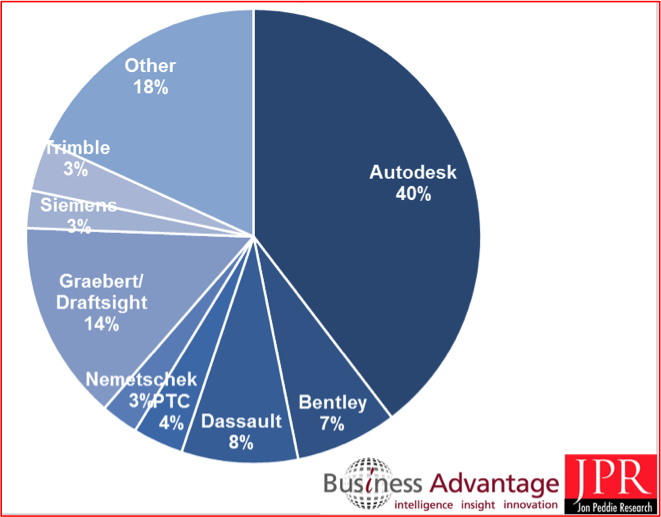 The majority of CAD users use Autodesk products. However, many of them are using 2D tools.

Interestingly, CAD users in Europe, the Middle East, and Africa are more aware of CiC than their counterparts in North America and Asia. The gaming industry has taught us that Asia is very comfortable with cloud-based gaming, and this comfort may well extend to the CAD industry. But also, Europe is an early pioneer in building information modeling (BIM) and PLM, and was early in introducing national requirements for accountability and data sharing.

The study also found that workers in manufacturing fields were more likely to be adding CiC capabilities to their workflow than those in AEC. We have some thoughts about why this might be. The manufacturing industry is more advanced in its CAD use, having moved to extensive data management (including PLM) for more than a decade before the AEC industry, and PLM almost necessarily requires centralized data access, for which the cloud is ideal. Now, in this generation, we are seeing the rise of the Internet of Things (IoT) for manufacture, industrial machinery, manufactured products, etc., and again cloud network resources are necessary to enable global networked communications.

The Shift Is Under Way

We believe this early study is interesting on many fronts, and it points the way to further study. As we say, we’re not particularly surprised that so many respondents were not interested in CiC. The cloud has yet to prove itself as a hospitable environment for design. At this point, it is more useful for collaboration, design validation, and document management than design itself, and the survey bears this out. Some of the big fears expressed by vendors include latency, which is still a problem at times for cloud-based workflows. A certain amount of latency can be tolerated and maybe not even noticed in data management, but it is going to be an annoying distraction for active design, and even a problem for collaboration. In contrast, workflows in which the data is processed in the cloud, such as rendering or analysis, are obviously not affected by latency. Instead, people send off data for processing and their machine is freed up for other work.

There are two major companies fielding true cloud-based CAD tools: Autodesk with Fusion (and TinkerCAD, etc.), and Onshape. SolidWorks has been testing the waters with cloud-based modules (but promises not to force any customer into a particular workflow). Bentley Systems is teaming with Microsoft to use Azure for its cloud-based services, which are primarily for BIM data management. Bentley’s Connect Edition also offers a variety of cloud services. Bentley is also a leader in metered payment options. Vectorworks 2018 software enables virtual reality (VR) walkthroughs, as well as rendered panoramas, and it can process and host content in the cloud. SolidWorks and Bentley, to name two examples, are enabling access to CAD resources through browser-based tools enabled by OpenGL.

Safety Concerns Are Hampering the Shift

We also think that the past few years, which have been punctuated every few months with major security breaches, have confirmed many people’s misgivings about the security of cloud-based applications. We won’t go into the arguments that say cloud-based workflows might be safer than traditional methods, other than to point out that most of the breaches have not happened in applications using cloud resources such as SaaS or servers-as-a-service, but rather in companies relying on traditional — and often out-of-date — systems.

What is more important is the rich variety of services that are being offered via the cloud. The survey probably should have been called “CAD and the Cloud” (CaC?). A great many users who say they’ll never use CiC are already using PLM tools in the cloud. They might be sending designs to be rendered in the cloud, and we think calling on the infinite resources of processors in the cloud as graphics processing units (GPUs) become increasingly available is inevitably going to not only expand the use of cloud-based tools, but also advanced capabilities such as analysis, machine learning, generative design, etc.

We plan to continue these studies to further gauge the pace of change in the CAD industry, but we will keep in mind the diversity of CAD users and cloud tools. What we can say now is that today, CiC is far from a priority for CAD users. And what’s even more interesting is that CAD vendors are tailoring their cloud-based products to the requirements and desires of their user base. The major CAD providers seem to have slowed down their rollout of cloud-based tools to better understand how their customers work and what products are best suited for cloud use. For instance, Autodesk has found that the cloud is enabling small companies to add on more complex capabilities such as PLM, CAM, and analysis; they can just turn on such services, often without the aid of outside contractors or consultants. Customers are very interested in metered provisioning, so CAD vendors such as Bentley are making that approach to billing more accessible. At SolidWorks, that shift to newer base technologies is being implemented by modules, frequently cloud-based ones, that do not force customers into disruptive upgrades.

We believe the cloud represents a major inflection point for the CAD industry, and for technology in general. Major shifts take time, but that does not make them any less profound.