According to a recent survey by Business Advantage, 15% of companies worldwide are using the technology and another 12% are considering it.


CAD in the cloud. For some CAD professionals, the term incites rebellion — an “I will never” declaration at the mere mention of handing over control of mission-critical software and proprietary data to an outside party. At the other end of the spectrum, users at small companies rejoice: Top-notch tools that were once out of reach financially are now improving workflows and helping grow business, thanks to subscription-based cloud access.

Somewhere between the anger-tinged backlash and the software vendors’ tales of happy customers lies reality — but the big picture isn’t easy to discern amongst all the noise. That’s where a recent survey comes to the rescue: “CAD in the Cloud 2017” from Business Advantage provides a detailed look at current use of cloud-based CAD software and plans for future adoption. The conclusion: About half of companies worldwide are using, implementing, or considering cloud-based CAD, with the highest level of interest and implementation coming from the Asia–Pacific region (APAC).

Who Is Using Cloud-Based CAD?

Business Advantage is known in the CAD market for its annual “CAD Trends” survey, which examines use of CAD-related software and hardware technologies, including CAD in the cloud. This time around, the global market researcher decided to expand on the knowledge gathered from “CAD Trends 2016” and dive more deeply into cloud-based CAD. An online survey conducted in December 2016 drew 203 responses from a range of job titles, company sizes, and industry sectors in 25 countries, all of whom claimed some knowledge of and/or experience with cloud-based CAD. Results were released in a webinar on March 30. 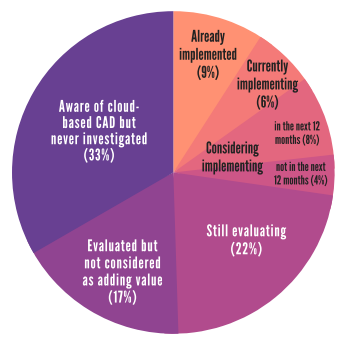 Approximately 15% of companies are using or implementing CAD in the cloud solutions, according to the survey, and 12% are considering implementation in the next year or beyond. Another 22% are still evaluating it, leaving 17% that have evaluated and rejected cloud-based CAD and 33% that are aware of but have never investigated solutions.

“APAC is most likely to have adopted or to be in the process of implementing CAD in the cloud,” vs. Europe/Middle East/Africa (EMEA) and the Americas, said Chris Turner, CEO and managing director of Business Advantage. “EMEA companies are most likely to have basic awareness of the technology, however, with no further investigation or consideration having taken place at this time.”

Those already using or implementing the solutions report that 36% of all CAD software in their companies is cloud based. That figure is expected to grow to 60% within the next five years.

Compared with previous “CAD Trends” surveys, the latest results reflect very modest increases in adoption since 2014 (7%) and 2015 (8%) — and a drop from one year ago, when “CAD Trends 2016” reported adoption at 11%. The 2% decrease could be a result of having used clearer definitions in the latest survey, according to Business Advantage, and it should be noted that the respondent base for the 2016 survey was a different group, and sample size was three times as large, as for “CAD in the Cloud 2017."

The 2016 report projected adoption to grow to 29% by 2021, observing, “Cloud-based CAD sees stable but low usage and importance in today’s market — although there is clearly interest, as future growth potential is strong.”

Users commonly consider CAD in the cloud to be CAD software hosted by the vendor, accessible via Internet browser, and “rented” via a subscription licensing plan — what is called a public cloud. (A variety of offerings from Autodesk and the product-design platform from relative newcomer Onshape are prominent examples.) This contrasts with a private cloud, wherein a company builds and controls its own hardware and software infrastructure that enables browser-based access to CAD tools.

According to “CAD in the Cloud 2017,” a private cloud platform is currently, and projected to be, the most used infrastructure for CAD in the cloud: Nearly half of respondents specified this option. Slightly more than a quarter of respondents are using or would opt for a public cloud solution, and slightly less than a quarter specified a hybrid or community solution. Private cloud was more popular with manufacturing companies than those in AEC and other markets, Turner added.

Unprompted, survey respondents named collaboration and cost savings as the key benefits of CAD in the cloud. One-third said they see no benefit, which Turner said could indeed be a signal that users see no benefit to the technology — or that a general lack of understanding of the benefits exists. 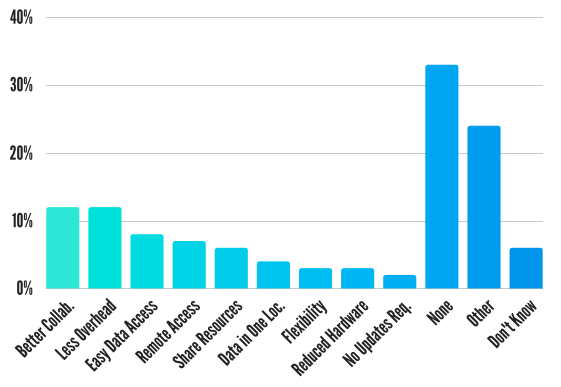 Perceived benefits of CAD in the cloud. (Source: “CAD in the Cloud 2017,” by Business Advantage)

When asked to rate attributes associated with cloud-based CAD, “higher mobility (can access from anywhere)” came out on top (8.1 on a scale of 1 to 10); followed by “ease of software updates (7.4); “improved collaboration” (7.0), “better scalability of computing power, storage, and memory” (6.9); and “being able to pay only for what we use” (6.7). The lowest-rated choices were “more control over security” (4.7) and “more control over intellectual property” (4.4).

Respondents from APAC showed a stronger association between CAD in the cloud and its benefits than their counterparts in EMEA and the Americas did. “Perhaps this reflects better knowledge of the solutions in this particular region,” Turner said. “Although respondents in APAC know more, it seems, about CAD in the cloud, they do not necessarily value the attributes more highly — which is interesting.”

Regarding which attributes they valued most, respondents indicated “higher mobility” (7.7); “ease of software updates” (7.0); “improved collaboration” (6.9); “being able to pay for what we use” (6.8); and “better scalability,” “reduced operating costs,” and “flexibility to use sophisticated software,” (each 6.7). The least-valued attribute was “part of green IT strategy” (5.1).

Asked to rate areas of concern about cloud-based CAD solutions, top results were as follows (on a scale of 1 to 10). Not surprisingly, issues around data security and privacy dominate the list:

Nicola Mansfield, market analysis director at Business Advantage, said, “Interestingly, there’s little difference in levels of concern for data stored outside one’s own country, and data that’s stored within the country. Also of note is a concern about dependency on vendors, possibly leading to price increases. It’s an area that perhaps CAD vendors need to communicate about to allay fears and offer price commitments for the future.”

Overall, levels of concern are higher in the Americas region than in EMEA or APAC, and this is also the case in larger companies, Mansfield said.

Lowest in the rankings were:

Accessing CAD in the Cloud

Despite the appreciation of CAD in the cloud for its support of mobile access to software, most users are currently accessing it from a desktop computer, and that appears to be the case moving into the future, according to the survey. 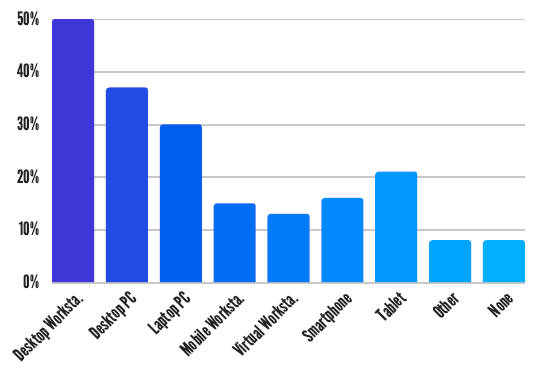 Devices used to access CAD in the cloud. (Source: “CAD in the Cloud 2017,” by Business Advantage)

Other notable survey finding include:

The “CAD in the Cloud 2017” recorded webinar and slides will be available on the Business Advantage website in the coming weeks, according to the organization. For more information, e-mail Bill Gordon, vice-president of business development.