Get a Grip on the Cloud for CAD

CAD Manager Column: If you’re trying to make smart choices about cloud technologies for your company, don’t base your decisions on hype and hearsay — start by understanding real-world benefits and liabilities. 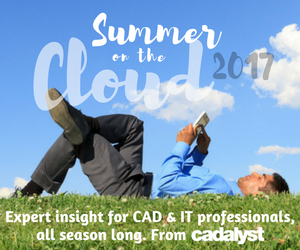 Editor’s Note: This column kicks off Cadalyst’s Summer on the Cloud, during which we’ll explore some of the benefits and challenges of cloud technology for CAD. Over the next few months, you’ll find more cloud coverage in future installments from Robert Green, in Alex Herrera’s Herrera on Hardware column, in the Cadalyst Library, and more!

Believe it or not, the term “the cloud” has been bandied about in information technology circles for nearly 10 years now, and the idea of CAD running on the cloud has been discussed for almost as long. During this cloudy decade, we’ve heard plenty of hype from the cloud hardware and software companies, but specifics have often been lacking. It’s no wonder that the cloud remains such a confusing concept.

In this edition of the CAD Manager’s Newsletter, we’ll explore a general framework for what CAD in the cloud might mean for different types of companies, define some terms, and explore what the relative benefits and limitations might be. Here goes.

What Is the Cloud?

A good question — that has multiple answers. Perhaps the simplest answer is to say that the cloud is a collection of computing resources that are located somewhere other than your desktop, and are accessed via an Internet or virtual private network (VPN) connection. Practically speaking, cloud-based resources can include any of the following:

Network storage. Think applications like Dropbox or OneDrive that provide storage for your files on a remote server. Costs are typically computed in terms of terabytes per year, per user.

Dedicated servers. More than just network storage, a dedicated server can host company-specific SQL databases that require special server configurations without being located at your company’s offices. Costs typically depend on the number of users connected to the server and total amount of storage, and are computed on a per-year basis.

Software as a Service (SaaS). Any software application that is centrally hosted on a remote server and subscribed to (rented) for a fixed period of time can be described as SaaS. The user never owns the software, and no usage rights remain after the subscription period ends. Costs are typically based on the number of users and computed on monthly or annual rental periods.

Don’t be confused by the term private cloud; it simply indicates an ecosystem of these components that’s hosted in a home office (instead of on a cloud service can be purchased by the public) and accessed from a remote office of the same company. The company has ownership over the ecosystem — but the problems of bandwidth and latency remain.

If you think about it, the types of cloud resources listed above (workstations, software, servers, and storage) are the same resources we’ve always used to run and control our CAD environments. The difference with the cloud is that these resources aren’t usually located at, or owned by, our company. I like to think of it as hardware and/or software outsourcing.

Looking at a cloud CAD ecosystem from a “glass half-full” perspective, the following potential benefits emerge:

Lower upfront costs. Rather than having to purchase servers, software packages, or workstations, a cloud provider simply lets you pay as you go on a rental basis. For cash-strapped companies that can’t afford expensive purchases, cloud providers serve as a kind of leasing agency so your company can preserve capital.

Fewer IT responsibilities. Don’t have a full-time server specialist in your understaffed IT group? Don’t want to rebuild server drive arrays to increase storage? Have troubles scheduling IT services? You can bypass the IT and maintenance hassles entirely if your cloud provider handles problems for you.

Certainty of maintenance. When using a cloud-based workstation, server, or storage resource, ordinary maintenance issues such as keeping drivers up to date, replacing bad memory, or swapping out defective drives become the cloud vendor’s problem, and you don’t have to come up with extra funds to pay for those fixes.

Scalability of resources. Need more workstations — or fewer? Need more cores for processing a rendering? Need more storage space? Want to implement a new dedicated server? Need to add a couple more CAD user seats? Just place the order with your provider, and they’ll have everything rolling in far less time than it would take you to budget, spec, acquire, and deploy it on your own.

Looking at the cloud CAD ecosystem from the pessimist’s perspective is instructive as well. The following potential pitfalls come into focus:

Rent is forever. While the upfront cost for a cloud-based resource are lower than an outright purchase, the fact is the hardware or software resource will simply stop working for you the moment you quit paying a subscription/rental fee. The old “buy it and run it into the ground” model of ownership doesn’t apply here, which could be very worrisome if business conditions sour and you can no longer pay the rent.

Internet failure. If your hardware, software, and storage is hosted by a cloud provider and your Internet goes out, work screeches to a halt — and stays that way until your Internet access returns.

Internet bandwidth issues. If all your workstations, servers, storage, and CAD software are stored offsite, then you’ll have to use an Internet connection to access them, right? Does your company have enough Internet bandwidth to support all users working this way? Will your Internet speed make loading an XREF or base model a 10-minute ordeal? When it comes to cloud-based CAD, user productivity is directly proportional to Internet bandwidth.

Latency is a constant. Even if your company has infinite bandwidth, it still takes time for a mouse click in Omaha to reach a cloud-based workstation hosted in New Jersey, and even 0.25 seconds is very annoying to users. Trying to span continents or oceans with cloud-based workstations can be insufferable. This time lag, or latency, makes a much bigger difference that you might imagine when working with cloud-hosted design software.

Security and ownership concerns. Where is the cloud server or storage vault located? Could your intellectual property rights be compromised if it is in another country? Which country’s laws on search, seizure, and forfeit of digital assets will prevail? These are huge questions that will make your company’s leaders lose sleep as they ponder the possible outcomes.

It’s clear that moving your CAD ecosystem to the cloud will require thorough analysis of your company’s specific needs. In coming editions of the CAD Manager’s Newsletter, I’ll reference other Cadalyst resources and provide checklists for you to use to determine whether you company can utilize cloud technology to your advantage.

So get ready to do some research, crunch some numbers, and set out a plan for your company’s future CAD ecosystem. It’s going to be a cloudy summer!

What are your thoughts on the CAD cloud? Please e-mail me your thoughts at rgreen@cad-manager.com, and look for your feedback in the next installment.