Harnessing the Cloud for CAD: The Case for Virtual Workstations, Part 2


Hosting CAD workstations in a virtualized central datacenter opens up a wide range of benefits — benefits that traditional physical workstations simply cannot deliver. The first installment of "Harnessing the Cloud for CAD: The Case for Virtual Workstations" highlighted those advantages and provided guidelines to help navigate the decision on whether to adopt virtual workstations, stay with physical, or implement some combination of the two. But that decision is only the first of several choices that CAD IT managers need to make. Once the commitment to go virtual is made, the next issue to tackle is the type of virtual workstation solution to deploy. Today, the vast majority are being built around one — or a combination — of two fundamental models: virtual desktop infrastructure (VDI) and cloud.

Early incarnations of virtual workstations have followed the model established and proven over the past decade: VDI. It is a perfectly logical path to pursue, since the virtual workstation is, in essence, a natural evolution of VDI-based PCs that millions of office and productivity users already rely on. In the PC model, businesses outfit their own on-premises servers and datacenters with enabling software (from vendors such as VMware, Citrix, and Microsoft) to host virtual desktops supporting their corporate clients. VDI-based virtual workstations follow the same approach, and leverage much of the same hardware and software infrastructure, with one critical exception: they leverage and rely on workstation-caliber GPUs and drivers, physically housed in the host server. Without that GPU, the virtual machine couldn’t hope to handle the workloads presented by any remotely demanding CAD workflow.

Now, the advent of the cloud is providing another way to host virtual workstations. While both cloud-hosted and VDI-based environments work in basically the same manner, the cloud approach eliminates the need for any business-owned servers or datacenter at all. Rather, the virtual workstation machines are hosted on the infrastructure of a third party, such as Amazon Web Services (AWS), Google Cloud, or Microsoft Azure. The business and users don’t know where their workstations are hosted — and they don’t necessarily need to.

Although two basic models work in fundamentally the same way, there are significant differences in the appeal, implementation, usage, and management — differences that can be illustrated by an analogy about housing choices.

VDI is like buying a house. You fund it, furnish it — mostly without limits — and maintain it. You can customize it just about any way you want, but there’s a long lead time, lengthy commitment, and hefty capital expense and overhead. The size and capacity are fixed, so you can’t expand easily if you need to, and you pay for all the space, even during the times that you don’t need it all.

Next, we have two basic cloud solutions: private and public. With a private cloud, the provider dedicates some portion of its physical resources to your business and your business only. Think of the private cloud more like an apartment: Once you sign the lease, you can configure it and furnish it however you like (to a large extent), but you are limited to the capabilities of the provider. You keep a lot of the control but outsource the maintenance. Lead time and capital expenditures are low, and the commitment is shorter.

And last we’ve got the public cloud, where your virtual workstations are hosted on the same physical infrastructure as many other customers. This model is more similar to renting a hotel room. With the public cloud, you completely outsource maintenance, with less control and customization, but there are typically enough options to please most customers most of the time. Upfront costs and lead time are negligible, and the commitment is very short, with virtual workstation instances — specific configuration options defined by the provider — available to rent by the day (or even by the hour). 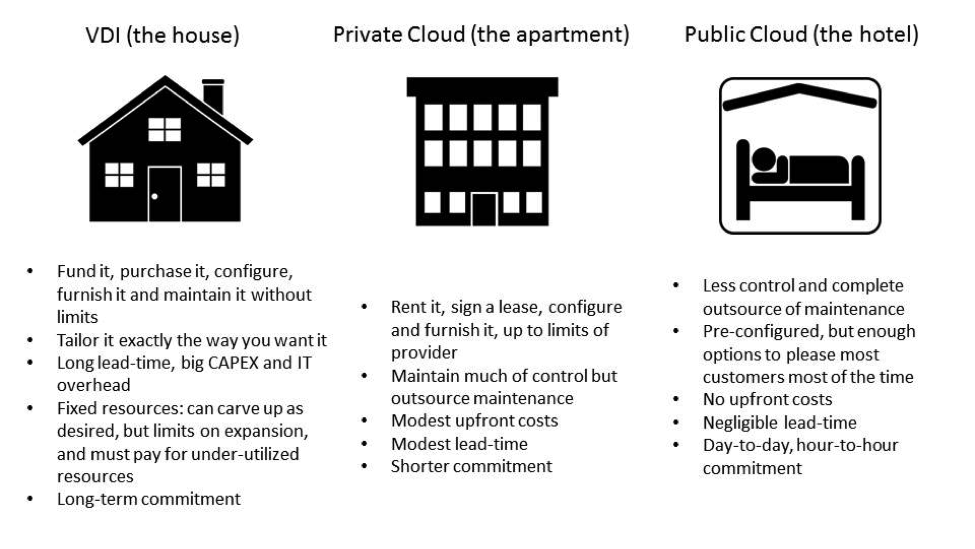 Renting Has Its Perks

Rather than pitching businesses to build their own on-premises computing environments, a growing roster of providers are betting on the appeal of a cloud-hosted environment, creating a simple, pay-as-you-go infrastructure to support CAD applications, databases, and workloads, all hosted in the cloud. And they’ve got some compelling arguments to make: On-demand leasing of not only a workspace but users' machines (in virtual form) in the public cloud offers a long list of advantages that go beyond what even virtualized private datacenters can offer — advantages appealing to both IT managers and CFOs alike.

High on that list is flexibility. Deploying a fixed amount of hardware via a business-owned VDI-based datacenter delivers a fixed level of computational resources — no more, no less. Yes, virtualization allows those resources to be sliced dynamically and configured to various shapes and sizes. But those capabilities can't quickly expand to meet any growing demands, nor can they contract as demands subside. A business might struggle facing unanticipated peaks in demand; on the flip side, hardware may sit idle during project lulls. With the cloud, however, you invest nothing to start and pay only for the resources you need, then add — or reduce — resources as workflows, projects, and business fortunes evolve. Renting from the cloud means virtually no lead time. Outfitting a new team or contractor can take just minutes, instead of waiting weeks or months for the hardware to be purchased, delivered, and configured.

A public cloud advantage: rent only what you need, for only as long you need it. Image courtesy of Frame.


Getting what you want when you want it starts with the types of workstation capabilities CAD users are accustomed to. These are basically virtual machine instances that deliver comparable power to the traditional deskside machine you would have otherwise configured: similar CPU and GPU performance, along with equivalent supporting memory and storage allocated. But with a virtual workstation in the cloud, users are no longer stuck with that one static configuration. Rather, they can now temporarily rent virtual machines that are much more powerful than those they would have access to in a traditional, physical arrangement.

For example, engineers and designers could run on some mainstream instance for the majority of their iterative CAD workflow, modeling, analysis, and visualization. But when the need arises, they can spend a few hours on some monstrously allocated virtual configuration — with horsepower well beyond what they could ever justify purchasing in physical form. (The next installment of this article series will take a look at a variety of the configurations of cloud-based virtual workstations available today.)

In addition to the technology, there are practical benefits, in terms of both logistics and finances. Renting in the cloud requires no hefty up-front expenditures to build a datacenter — a proposition with obvious appeal for cash-strapped startups and small businesses. But even well-heeled businesses with deep pockets like the idea, as finance managers often prefer spending in the form of operating expense (OPEX) by renting instead of building via capital expense (CAPEX). Instead of investing today’s cash flow in assets that pay back far down the road, businesses can spend more of that cash on initiatives to build and promote business today.

Ease and effectiveness of IT management can be enough to push a business to a cloud-hosted virtual workstation solution. Yes, VDI technology is now both mature and robust, but it’s far from simple. Small organizations simply aren’t equipped to take on the complexity of building and managing a VDI datacenter, and larger enterprises may prefer to streamline operations to focus on core competencies rather than IT administration. With virtual workstations in the cloud (along with storage), businesses need not worry about security and maintenance, since both responsibilities are left to a cloud provider that is highly motivated to do both extremely well.

A common misconception, likely spurred by a few high-profile breaches of celebrity photos and the like, is that clouds are a less secure option. But when we drop preconceptions and assess the state of the technology, the reality becomes clear: Clouds are not only less vulnerable than a traditional, client-heavy environment, but there’s a solid argument they should be significantly more secure.

The biggest reason, as outlined in the first installment of this series, is that the source data never (or rarely) leaves the cloud. Only the visual representation need to, and pixel streams transmitted from cloud to client are typically encrypted. Furthermore, the glaring security hole created by employees taking laptops or flash drives off the premises and to who-knows-where is eliminated. Consider also that cloud datacenters are going to be relatively new, built from the ground up on fresh hardware and software, making them freer of the security holes that can plague older legacy solutions, rife with patches and bug fixes. Then factor in the overriding motivation for cloud providers to lock down their infrastructure, since a high-profile breach could be devastating for business. In reality, cloud security is less a risk and more an advantage.

For many tasked with implementing a virtual workstation environment for CAD operations, the choice will be between VDI and the cloud. But those two choices don’t have to be mutually exclusive. Modern CAD workflows in design, manufacturing, and construction exhibit highly variable IT demands over a project's life. For example, cloud providers are enabling hybrid models that can leverage an enterprise’s existing VDI datacenter capacity to serve a project's base-level requirements, while seamlessly and dynamically extending that virtual environment into the cloud as demand warrants.

In the next installment of “Harnessing the Cloud for CAD: The Case for Virtual Workstations,” we’ll look at the specific examples of virtual workstation instances, as well as issues a CAD-focused business should consider when deploying virtual workstations in the cloud.