Harnessing the Cloud for CAD: The Case for Virtual Workstations, Part 3

Once you’ve decided to bring cloud-hosted virtual workstations into your workflow, you’ll need to tackle a host of additional decisions about platforms, providers, and instances.


Making the choice to move your company’s workstations to the cloud, whether completely or partially, is a critical IT decision. (For more on this topic, read the first two installments of this series.) Deciding to make the jump to the cloud, however, is just the start of the process. To secure the right cloud solution, you’ll need to address an additional set of questions and decisions, with answers and choices that will vary from business to business.

Cloud technologies and infrastructure continue to evolve rapidly, but today the majority of the cloud runs on the physical infrastructure of a trio of providers: Amazon Web Services (AWS), Microsoft Azure, and Google Cloud. Even if you’re planning to use a third party as your front-end platform, and therefore you won’t be a direct customer of one of these companies (or a similar owner of physical cloud infrastructure), chances are that third party has built its environment on top of one of a handful of top-tier cloud providers (read on for more on third-party options).

Some of the cloud resources provided by AWS, Microsoft Azure, and Google Cloud are geared more toward offloading high-performance compute jobs, but increasingly, the three are eyeing desktops-as-a-service (DaaS or virtual hosted desktops) as a prime market opportunity. And a subset of those virtual hosted desktops are now exploiting workstation-class GPU hardware and drivers, making them worthy of the name virtual workstations.

A Menu of Virtual Models

When vetting providers and their workstation-class virtual desktop offerings, prospective customers should explore a range of criteria, but chances are they will start with the chief concerns they likely have when shopping for a conventional deskside or mobile workstation: features and performance. The instances a cloud provider offers in virtual workstations — essentially, the models they make available for use — are a critical factor when evaluating features and performance. After all, if you’re going to replace a designer’s most trusted tool, the replacement had better at least be comparable in capabilities to what you can find in a traditional form.

Virtual workstation instances are defined by the same basic set of specifications as their traditional, physical brethren: how many CPU cores and GPU resources are allocated to your virtual machine, along with the amount of memory and persistent storage. Because the cloud server’s physical resources may be shared/virtualized across multiple hosted machines, rather than reflecting a static level, these specs indicate the minimum level of resources your machine will have available once provisioned. And typically, users can drop one machine and spin up another, whenever needs warrant it.

To get a sense of what’s available out there for CAD-oriented visual workloads, let’s take a tour through what the “big three” are offering today. Somewhat ahead of the curve, Azure has been arguably the most aggressive in creating and marketing cloud-hosted workstations for professional applications, especially in CAD-oriented markets. Azure’s most recent GPU-accelerated instances are labeled with “NV” plus the number of CPU cores (Intel Xeon E5-2690 v3) allocated to the instance: NV6, NV12, and NV24.

These instances offer impressive workstation-caliber specifications, with even the entry-level option beyond what most would configure in a conventional deskside machine. Memory and storage run from about 56 GB and 380 GB SSD, respectively, for the NV6 up to 224 GB and 1.5 TB in the NV24. For graphics, the NV6 allocates half of an Nvidia Tesla M60 server card, essentially giving the virtual machine dedicated access to a single GPU with performance somewhere between the Quadro P4000 and P2000 (two of the company’s deskside workstation–focused GPUs).

Azure’s heavily equipped instances illustrate one of the advantages of going to the cloud: the ability to rent a workstation like the NV24 instance that virtually no CAD user could ever justify buying for their desk. A traditional deskside configured to the level of the NV24 would run close to $20,000, and would be overkill for the vast majority of tasks. So no, you’re not buying one as your permanent machine, but it certainly would be handy to switch to one at a moment’s notice to crank through the occasional peaks in demand. 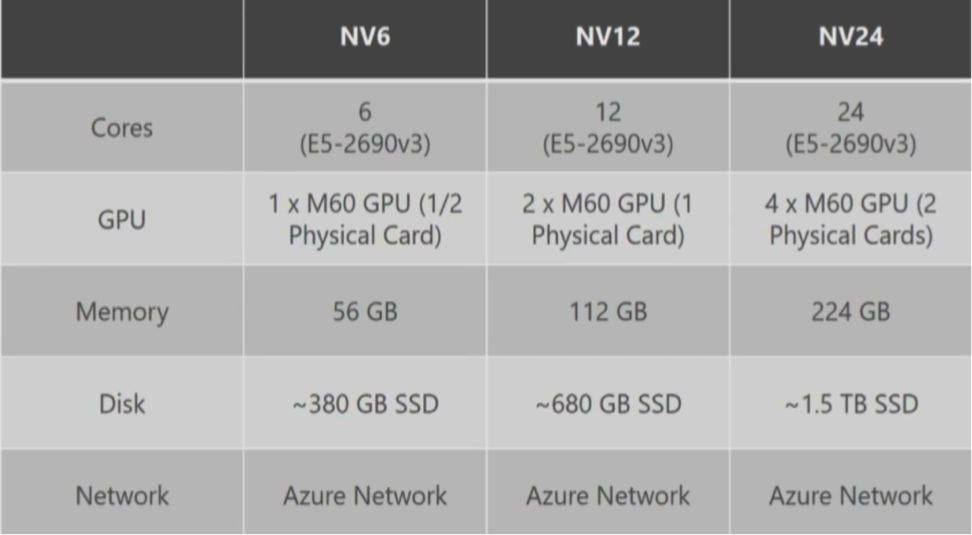 Amazon Web Services (AWS), by far the largest of the trio, is steadily dialing up its virtual workstation hosting capabilities as well, recently announcing its G3 GPU set of graphics instances as part of its EC2 offerings. The three G3 instances closely track Azure’s — based on the similar Xeon CPUs and Tesla M60 cards, with the identical allocation of GPUs to instances — but with even larger memory provisioning.