Harnessing the Cloud for CAD: The Case for Virtual Workstations, Part 4

Herrera on Hardware: With virtual workstations, the infrastructure between the client and the cloud can make or break the user experience.


Editor's note: Read the previous installments in this series, "Harnessing the Cloud for CAD: The Case for Virtual Workstations," here.

An emerging paradigm for CAD computing environments, hosting virtual workstations in the cloud presents CAD professionals a host of potential benefits — benefits explored in previous installments of this series. Of particular appeal is the potential to dramatically simplify IT complexity, by outsourcing the procurement and management of desktops to the cloud provider. But not everything gets simpler in a move to the cloud; making that transition demands attention to a few technology and infrastructure issues that a traditional topology of distributed physical workstations does not. First and foremost among those issues is securing the means to get to and from those virtual desktops in the cloud’s physical datacenter and providing the right endpoint devices for the desks (and laps) of users.

There’s more to selecting and securing a virtual workstation environment than choosing a cloud provider and machine instances. The cloud-hosted virtual workstation creates a visual representation of your desktop, in the form of a pixel stream, rendered with a certain resolution and frame rate. But on top of creating that pixel stream must come the means to get that pixel stream from the physical cloud infrastructure to your office or campus and displayed for the user. And similarly, how to get user I/O, such as keystrokes and mouse updates, quickly back to the cloud for processing.

Ultimately, with graphics, computes, and data on the other side of a network, the user’s experience is only going to be as good as the network that sits in between. Fortunately, the emerging cloud ecosystem is well aware of that fact, and numerous vendors — from traditional network service providers (NSPs) to the cloud providers themselves — are stepping in to address that need. Most top-tier NSPs, including familiar names like Cisco, EMC, and Level3, offer some type of direct-to-the-cloud services with high quality of service (QoS). And if they don’t offer the service now, they likely will shortly, as all realize the cloud is where today’s big growth opportunity lies. On top of what the traditional NSPs offer, and in the pursuit of being one-stop shops, top-tier cloud providers are offering high-speed, low-latency connections, like Microsoft Azure’s ExpressRoute, AWS DirectConnect, and Google’s Cloud Interconnect.

Which network resources are the right ones? And which providers of those resources are the best choices? There’s no shortage of capable options, but first it’s important to understand exactly what challenges that network will face in providing a high-quality, interactive, real-time visual experience.

And that leads to an important distinction between cloud and virtual desktop infrastructure (VDI)-hosted virtual workstation solutions. VDI-hosted machines may be accessed via local-area networks (LANs), say in a single office — with huge bandwidth, low latency, and everything behind a firewall. Using the cloud, by definition, means relying on wide-area networks (WANs) all the time. And that places more of an onus on two key components: a network connection to the cloud that’s up to snuff, and an adequate protocol for delivering complex 3D graphical displays over that connection.

Such protocols encapsulate several functions, from the communication channel to security features and I/O support. They come in a variety of types, in both open and proprietary forms. Examples of the former tend to build off standard codecs capable of delivering high-resolution, full–frame rate video, most notably including the now-ubiquitous H.264, which was initially developed for terrestrial HDTV broadcast. Protocols based on such codecs can deliver a solid experience, but they are optimized for streaming natural video over a robust communication channel.

As such — and with a disclaimer that individual experiences will surely vary — simpler codecs such as H.264 (and derivatives like Vmware’s Blast) often find more favor on the LAN, which is more forgiving with respect to both performance and security rather than complex visual desktops combining text, graphical user interfaces (GUIs), and synthetic 2D and 3D graphics streamed across an inherently less secure — and far less capable and predictable — WAN connection. Given that a cloud-hosting environment is by definition a WAN-accessed environment, extra care should be taken in considering the combination of network and protocols that the environment will rely on.

Designed specifically to deliver graphics-intensive desktops from a remote datacenter to a local client, Teradici’s PC-over-IP (PCoIP) is one of several technologies and protocols positioned to fill that space between the cloud and the user. PCoIP matured as a technology geared toward remote access for traditional clients and servers as well as a desktop delivery protocol for VDI environments. Rather than simply a codec for natural video, PCoIP was designed to optimally encode graphical desktops, intelligently decomposing images into different types (such as graphics and text) and encoding them accordingly. And being designed specifically for the WAN, PCoIP offers a range of features to enhance performance; most notably, dynamic network adaptation and pixel encryption. The former automatically detects network congestion issues and dynamically scales compression appropriately to minimize impact on frame rate, while the latter ensures government-grade security for pixel streams that are “out in the open” on the unprotected WAN.

Crossing over to cloud environments was a natural extension for PCoIP, and it’s now offered by most cloud providers, including Microsoft Azure (in NV instances), AWS (EC2), and Google Cloud. Pushing forward to entice potential cloud adopters with a simple, complete PCoIP access package, Teradici began offering Cloud Access Software with support for both Linux and Windows machines, as well as both direct and brokered connections. 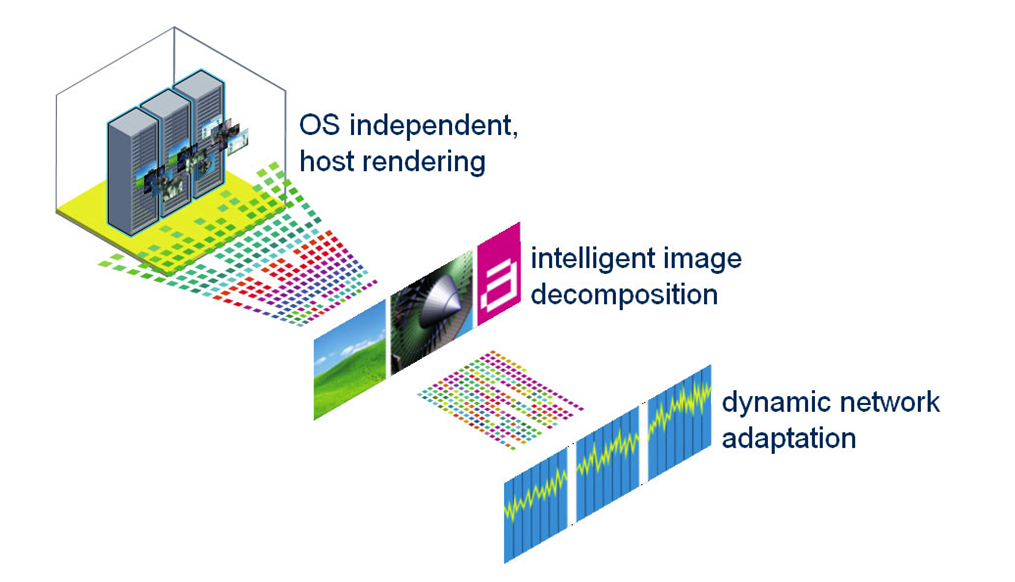 Many protocols may be acceptable for the LAN, but approaches like PCoIP are finding favor in cloud-based, WAN-only environments. Image courtesy of Teradici.