Onshape argues that product data management (PDM) solutions are obsolete, and rebuts competitors’ criticisms of its own efficacy in addressing CAD users’ needs.

During a recent webinar announcing the launch of Onshape Enterprise, Abe Feldman, senior product designer for Onshape, discussed some of the issues that have driven the company to develop the new version of the cloud-based CAD solution over the past year and a half. He explained that Onshape’s customers have been “really struggling with the existing systems and processes that have been put in place over the last several decades to handle the complexity of the design process.” In today’s environment they’re burdened still further, with more products in development and more internal and external stakeholders who require access to designs.

Feldman used the term “design gridlock” to describe the hassles that many companies encounter “when their processes get bogged down by their old file-based technologies,” such as product data management (PDM). The situation is exacerbated in enterprises, he said, because their operations are spread across multiple locations.

As enterprises attempt to formalize design processes, “the slower and more frustrating everything becomes,” said Feldman. Systems that require users to “check out” models to work on them prevent much-needed access by others and slow down projects, and because users can only get metrics at the time of check-in or check-out, “there’s really no visibility into what’s going on in real time, and how a project is progressing,” he said.

The End of PDM?

Ultimately, Onshape believes that PDM is shackling users to inefficiencies they should leave behind. “They’re being forced to choose between being organized and being fast, and this is really because many of the old systems that are in place with PDM and existing data file management workflows, really block people’s ability to collaborate, especially in the more global workforce,” Feldman continued. In addition, he noted, it’s “incredibly expensive” to provision multiple people in an organization with PDM.

Corcoran believes that Onshape has eliminated the need for PDM — and did so well before the arrival of Enterprise: “Onshape Professional, our middle offering, obsoleted PDM systems,” he commented. PDM has two primary components, Corcoran explained: controlling files, and release management. Onshape makes the former irrelevant by not being file-based, and replaces the latter with its own integrated release management functionality. “PDM system are just not good; [they are] a solution to a problem that exists because [traditional] CAD systems are file-based.” (Integrating other enterprise systems — such as product lifecycle management (PLM) or enterprise resource planning (ERP) — with Onshape Enterprise is possible, by using the Onshape application programming interface [API]). 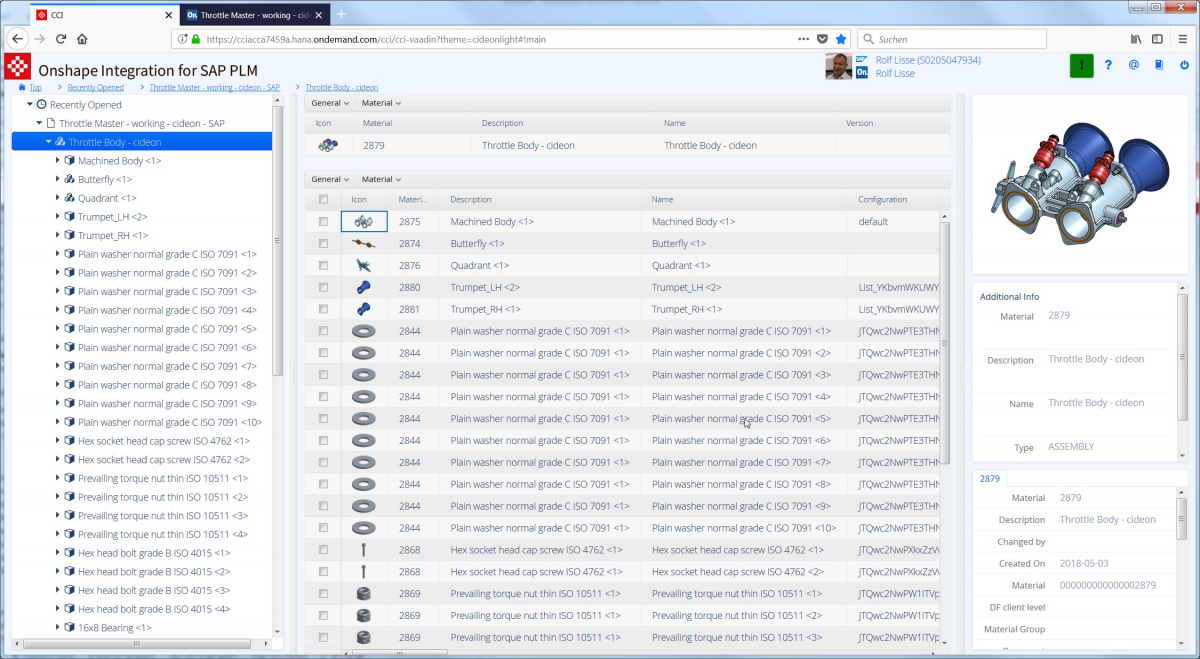 A screenshot from an SAP PLM system shows Onshape data, accessed via the Onshape API. Image courtesy of Onshape.

Onshape Enterprise goes a step further than Professional in its monitoring capabilities, adding tracking of every IT operation: adding and removing users, altering their access permissions, etc. “Onshape is the only tool in the world that actually allows you to control up to [the end point of] someone’s device what it is they can actually do on the data that you share with them,” said Feldman.

In any industry, a vendor’s perception of its own product will differ from the views of its competitors about that same product (and the latter are rarely complimentary). In the CAD world, however, there is a line of criticism from competitors that views cloud-based CAD as not simply inferior, but unnecessary — a reinvention of the wheel that doesn’t effectively address customer problems.

In one recent example, as reported by Roopinder Tara in the CAD Insider, former Autodesk CEO Carl Bass shared his personal opinion of Onshape, stating that it is “a classic example of the CAD industry worrying about technical problems rather than the needs of their users. It doesn’t solve a single problem for any customer.”

And at SOLIDWORKS World 2018, Suchit Jain, vice-president of strategy and community for SOLIDWORKS, shared his perspective with Cadalyst: “I think [SOLIDWORKS is] at the top of the Maslow triangle,” Jain said, likening the development of CAD to psychologist Abraham Maslow’s hierarchy of needs (typically represented as a triangle with basic human requirements at the base and more advanced motivations toward the peak). … “On my Maslow triangle, Onshape is at the bottom, trying to solve the mundane things.”

Corcoran strongly disagrees with this perspective. “We are exactly addressing the problems people are having with their technology,” he said. “We’re the only ones changing things fundamentally,” he stated, noting that Onshape is the “only CAD system from any developer” that integrates real-time visualization into the design process on a daily basis, and the only one that enables two people to work on the same thing at the same time.

Onshape’s competitors, Corcoran, believes, “are doing more and more for less and less [of the user base] until they’re doing nothing for nobody.” They are too focused on very specialty or niche improvements that don’t benefit most users, or on changes that are detrimental because they introduce more complexity for PLM and PDM systems, he said. And because “effectively all other systems” are file-based, Corcoran pointed out, their ability to control data security is limited. “You can’t get it back once it’s out there,” he observed.

Ultimately, comparing Onshape to its more traditional competitors may an apples-to-oranges proposition. “It is more economical than a lot of things that are tagged as CAD or PLM, but it’s really a new category,” said Corcoran. “You have real-time visualization into what’s going on during the design process, and security rules are what you want them to be.”