Autodesk and the Cloud, Part 1: Customers 'Absolutely' Will Have a Choice

At Autodesk University 2012, CEO Carl Bass says desktop tools are not going away — for now — and users should move to online apps only if it makes good business sense.

Will Autodesk force customers to move from desktop- to cloud-based applications in the foreseeable future? Will the cloud provide adequate security for customers' data? And who will own data stored on the cloud — the customers who create it or the company that hosts the services?

At Autodesk University 2012 in Las Vegas last week, the company addressed all these issues and more. In the realm of CAD-related cloud technology, Autodesk is arguably a leader, and cloud-related topics were ever present at the user conference, reportedly attended by 9,000. The company announced two new and significant cloud-based apps: Fusion 360 and FormIt; presented a 90-minute Innovation Forum titled, "The Reality of the Cloud"; and broached the topic during sessions for the media, the opening keynote address, and other presentations.

In this article, I'll update you about Autodesk's plans to move (or not to move) professional CAD-related tools to the cloud and what I think it means for customers. Stay tuned for other cloud-related updates to come. Much of the information to follow is based on the reply of Autodesk CEO Carl Bass to a question I posed during a media Q&A session at last week's AU. I recorded most of Bass's reply and have posted the original video and transcript on Cadalyst.com.

All Software Is Moving to the Cloud — Or Is It? 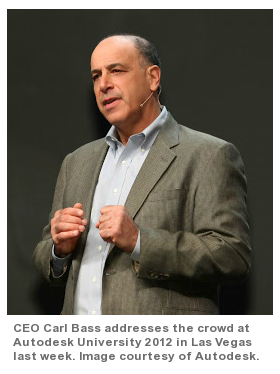 While some users still struggle to understand that the cloud is nothing more than software hosted on the Internet (as opposed to on their local computing device), software developers such as Autodesk are moving full speed ahead into the realm of software as a service, or SaaS. Autodesk, in fact, offers an impressive and growing suite of cloud-based applications branded Autodesk 360, including tools that range from building information modeling to product lifecycle management.

But that's not the full story. Bass went on to say, "Moving down a level to Autodesk, I think we've demonstrated we're moving a lot of software to the cloud. I don't think that means everyone is moving to the cloud. … I think there are a lot of applications that will be done on the desktop; I think there's a lot of power and capacity there that will continue to be used."

2. Proprietary Rights
2.1 Your Rights. As between You and Autodesk, and subject to Section 2.2 (License by You; Disclosure), You and Your licensors have and will own all right, title, and interest in and to Your Content.