New version from Graphisoft has a familiar look, but new Teamwork 2.0 and BIM Server may rock the world of building information modeling.

When I opened ArchiCAD 13 for the first time, I thought to myself, "Well, this doesn't look new. Where's the ribbon?" As a matter of fact, at first look, the new version really doesn't look different than the previous three versions of ArchiCAD. Even the desktop shortcuts are the same! In a way, this lack of change is good because my colleagues and I won't be spending time trying to learn a new interface. On the other hand, I like to see visual evidence that I'm using a new version.

But don’t let my initial comments fool you. ArchiCAD 13 is a major release; in fact, some of its new features could be classified as game changers for the world of building information modeling (BIM).

Major Release
Here’s a look at the major new features and tools in ArchiCAD 13, including the following:

BIM Server
Graphisoft’s brand new BIM Server technology is at the top of the list of improvements you’ll find in ArchiCAD 13. Based on Graphisoft’s new Delta Server synchronization, this new architecture improves productivity, data processing speed, and data protection. When a user makes a change to a model, only the changes (and not the entire file) are sent back to the shared file and forwarded to other users. For solo architects, this feature might not sound very useful, but for teams, this new system can dramatically improve remote collaboration and coordination, whether over a network or the Internet.

Teamwork 2.0
The new BIM Server is the foundation for Teamwork 2.0, the ArchiCAD file-sharing environment that Graphisoft describes as “next generation.” User roles in Teamwork have been completely changed. Previously labeled Teammate, Team Leader, Markup, View Only, and Administrator, roles in Teamwork 2.0 are Architect, Lead Architect, Drafter, and Viewer. You can customize each of these with different permission levels; Lead Architect (or office model manager) can give or take away specific rights to any or all of the Teamwork roles. Changes are maintained centrally, via the BIM Server, and apply across all model files on that BIM server. You also can create your own roles from scratch. All this is a great improvement over previous versions, in which permission levels and rights for each role were predetermined and unchangeable. Any model manager who has worked on a large project team should appreciate this level of control! I know I will. 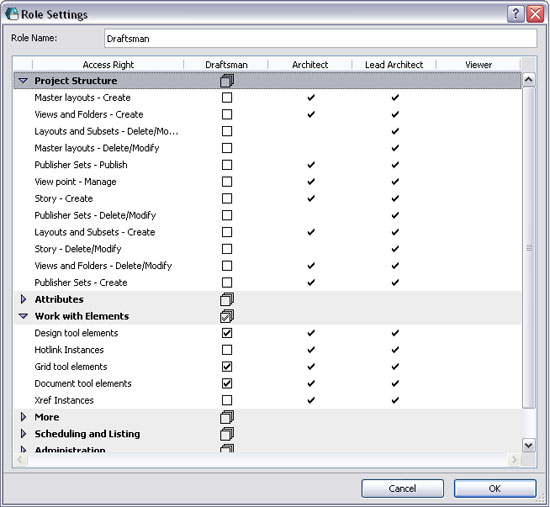 In ArchiCAD 13, project access and permissions for various user roles are controlled at the server level.

The new Teamwork palette displays the new workspace controls and a list of users currently working in a project.

Project Access
Another big change is in the way users access shared projects. First, users are set up at the server level and are allowed access to shared projects based on the roles that have been predefined for their user names. From the list displayed on the server, each user can select which project to join, then select and reserve model elements dynamically on a "just need to work on" basis. If a needed element is reserved by another user, that user can release those elements on the fly, without leaving the model file. Even more exciting is ArchiCAD's new built-in, instant-messaging application. You can send a message to a teammate across the hall or across the globe and a message box pops up in real time on his or her drawing screen. Hallelujah, my prayers have been answered! I'm sure I'm not the only one who thought instant messaging would be useful in a shared-model environment.

BIM Server Libraries
Before you set up your first teamwork project in ArchiCAD 13, you need to know that object libraries are now loaded a little differently. I had to play around a little to get it working perfectly for a version 11–based project that I was upgrading. Project libraries for Teamwork projects are now managed by the BIM server. (Solo projects, of course, are not managed by the BIM server).

Native 64-Bit Support for Windows OS
ArchiCAD 13 incorporates the architecture of Windows' 64-bit operating systems. Combine that with multiple-processor support and you should see a major increase in speed.

Oriented Views
The new Oriented Views feature is very simple and seemingly low-tech, but it offers a big advantage for those working on designs that have odd angles. You use it like the Rotate command to adjust your drawing window, so model elements appear perpendicular while you work on them, and then restores the original orientation when you are done. Annotations also adjust automatically to the final layout orientation angle. 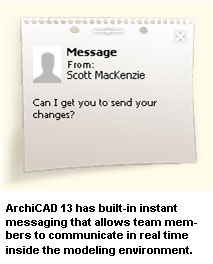 As for open options, you can now import viewports as embedded drawings, and there is a new checkbox to enable a partial open. (The Help file in ArchiCAD 13 explains this process.)

Improved Object Handling
Some of the improvements to object handling include the ability to embed them into a model. Users can also manage project libraries using the new BIM Server application.

Production Tools
A new ruler runs along the top and the left side of the drawing area in ArchiCAD 13. It isn't displayed by default; you must click the Ruler button on the standard toolbar to activate it. Now you can see the location of your cursor in relation to the grid. The ruler adjusts as you zoom or change drawing scale. As a welcome throwback for old-school AutoCAD users, you can right-click over the ruler and turn on Cursor Projection to get full-screen crosshairs!

Not Changed
ArchiCAD 13 does not bring any significant improvement to global attribute management. It’s still difficult to maintain consistency of attributes such as wall composites and profiles across models in a project that has multiple hot links. This might not be an issue for many ArchiCAD managers, but it is a real headache for me.

It’s a minor complaint, but the Library Manager dialog box in ArchiCAD 13 is smaller and seems less functional than it was in previous versions. You can no longer see a history of previously loaded libraries, a change I suspect is related to the new BIM Server Library Manager.

Best Thing to Happen to Shared BIM Modeling
ArchiCAD 13, with its new Teamwork 2.0 solution and native 64-bit support, is arguably the best thing to happen in the world of the shared building information modeling since you-know-who bought Revit. In fact, it's not really file sharing anymore, its database sharing, which makes more sense. As for any new product, time will tell if ArchiCAD 13 can work reliably under real-world conditions. I think this version has the potential to rock the industry and tip the BIM scales in Graphisoft's favor. Highly Recommended