Backed by a New Big Brother, Bricsys Eyes a Bigger Piece of the Pie

Bricsys’s pursuit of DWG-based CAD users will get a boost from an acquisition by Hexagon.


Bricsys has always been a small company with big ambitions. Now, after 16 years of going it alone, the Belgium-based developer of BricsCAD will have the resources to support more of those ambitions — including greater penetration into the U.S. CAD software market. Hexagon, the multinational corporation that purchased Intergraph in 2010, has added Bricsys to its fold, the two companies announced this week.

Although there’s a substantial size discrepancy between the two (Hexagon boasts some 19,000 employees, while the Bricsys count is closer to 200), the larger company won’t be swallowing up the smaller. Bricsys will continue operations as its own division within Hexagon PPM (formerly Intergraph’s Process, Power, and Marine division), and CEO Erik de Keyser will stay at the helm. “I’m not going anywhere,” he declared, addressing attendees of the Bricsys 2018 conference this week in London.

Rick Allen, president of CADWorx and Analysis Solutions in Hexagon PPM, dismissed the possibility that the fiercely independent Bricsys will have to change its way of doing things as a result of the acquisition. “I don’t like to fix what’s not broken,” he said, observing that there’s “very little difference in philosophy” between the two companies and their approach to serving customers.

Bricsys has long focused on profitability over growth and devoted the greatest portion of its budget to software development, so there was little left for such luxuries as sales and marketing teams. Therefore, in order to expand his company’s reach and build wider customer awareness, “we had to take huge, huge steps,” explained de Keyser — either sacrificing R&D to build out its own sales and marketing capabilities, or joining forces with a better-equipped entity. And after a year and a half of talks, that resource-rich organization was revealed to be Hexagon.

“We have a large sales and marketing team in the U.S.,” Allen said, referring to a primary market where Bricsys currently has little visibility. “The footprint of Hexagon in the U.S. — that’s quite substantial,” de Keyser concurred. He anticipates a “boost” in that market as awareness grows thanks to Hexagon.

For Hexagon, the acquisition of Bricsys means that “we’re going back to where our roots started from,” said Allen. He explained that Intergraph was founded as M&S Computing in 1969, and in its collaborations with NASA on missile guidance systems, “M&S Computing invented CAD.”

Hexagon chose Bricsys because “we wanted our customers to have a complete solution,” said Allen. BricsCAD appealed because “there’s virtually no learning curve [for AutoCAD users to adopt BricsCAD]; if you’re used to one, you can move to the other,” he enthused. In addition, BricsCAD is built on a “faster DWG engine” powered by the nonprofit Open Design Alliance (ODA), and 3D modeling, building information modeling (BIM), and detailing are all carried out in DWG, so there’s no file conversion involved. “Every time you do a conversion, you’re going to lose some fidelity, you’re going to lose some quality,” Allen explained.

Finally, BricsCAD features an “incredible API [application programming interface],” Allen noted, supporting in-house add-on creation and encouraging third parties to create a variety of applications that address the needs of various vertical niches and regional requirements. It’s an approach that Hexagon already supports with its CADWorx plant design suite, he continued: “With CADWorx, we don’t do everything [ourselves]; we don’t expect to ever do everything.”

“Everybody knows that Revit is not the easiest product to use,” said de Keyser, painting a less-than-flattering picture of Autodesk’s BIM solution. Allen and de Keyser were careful to note, however, that their goal is not to poach existing Revit customers. “We’re not going after anybody’s throats, but we’re going to give customers an option,” Allen stated. Hexagon realized that “Revit’s market share penetration was not that great,” and decided to “capitalize on the mistakes they were making,” he continued. “We’re going to lead the horse to water, and we think a lot of them will drink.”

There is also a large pool of potential BricsCAD users who don’t need the platform’s BIM capabilities. As de Keyser sees it,12 million registered users of AutoCAD, plus an estimated five illegal users for every licensed customer, adds up to about 70 million DWG-based CAD users who might see the value in paying for a CAD solution that costs less than AutoCAD. 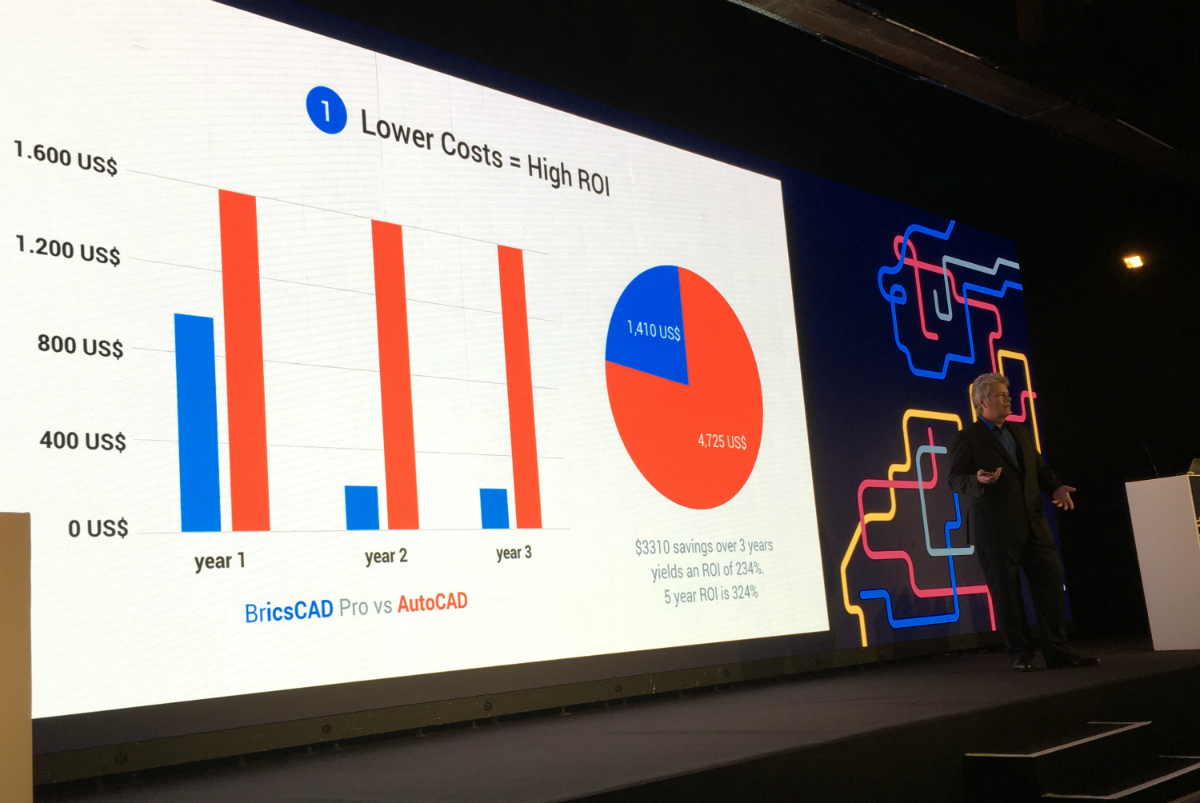 At the Bricsys 2018 conference, Robert Green compares the three-year cost of BricsCAD Pro with that of AutoCAD.


According to Robert Green, a certified migration consultant for Bricsys, “your cost of entry [with BricsCAD] is even lower than one year of rental [of AutoCAD].” The cost of BricsCAD Pro comes to $1,410 over three years, compared with $4,725 for AutoCAD over the same time period, he explained. “This is why people are interested [in switching] … when you make this financial argument, you immediately have people’s attention.” The optional maintenance package, which includes upgrades and support, costs an additional $220/year.

Financial differentiation between the two solutions, Green explained, goes beyond price: Customers can choose to purchase or rent BricsCAD, and run it as a standalone or network solution. The perpetual license option, which most customers choose, “is a good insurance policy to have,” he said; in the event that a company runs into a slowdown in work or other financial stress and cannot afford rental fees, the software is still accessible.