Autodesk-sponsored report finds BIM users in four countries are applying the technology on more projects, seeing a positive return on their investment, and closing the gap with BIM use in the construction market.

Dodge Data & Analytics first partnered with Autodesk to produce a SmartMarket report on the business value of BIM in 2012. (The company was then known as McGraw Hill Construction, and the original report focused on the U.S. only.) At that time, it found that BIM use was not as widespread in infrastructure projects as in the building sector: it seemed to lag about three years behind. Five years later, there has been a dramatic growth of BIM implementation, according to the report.

In the U.S., 76% of respondents reported some level of BIM use for transportation infrastructure projects, with 73% of those authoring their own models, and the remainder using models created by others. (Those who do not author models commonly use them for interdisciplinary project collaboration, to deliver design intent to construction, and to aid production of 3D deliverables for owners, among other uses.)

Those numbers indicate that adoption in the transportation infrastructure market is starting to catch up to that in the construction market. A 2014 SmartMarket guide, “The Business Value of BIM for Construction in Major Global Markets,” reported that BIM adoption in North America reached 71% in 2012, with contractors at 74% and architects at 70%.

Wider (and deeper) BIM adoption are surely good news as far as report sponsor Autodesk is concerned. The company — which defines BIM as “an intelligent 3D model-based process that gives AEC professionals the insight and tools to more efficiently plan, design, construct, and manage buildings and infrastructure” — is continuing to invest in developing its portfolio of BIM tools, and promotes it as the way to optimize work and company processes in architecture and construction, structural design, and MEP (mechanical, electrical, and plumbing) as well as infrastructure.

In the past two years in particular, there has been a large surge in the numbers of users defined as “heavy” BIM users, meaning they use BIM on 50% or more of their transportation infrastructure projects. In the U.S., this figure jumped from 27% in 2015 to 55% in 2017. These growth patterns and figures are similar across the four countries addressed in the report; although U.S. users have a longer history with applying BIM in this area, the European countries are catching up quickly.

Although this rate will likely slow in coming years — 68% of participants believe they will be heavy users in 2019 — Dodge Data & Analytics expects the group defined as “very heavy” users to double or even triple over the next two years. (That group applies BIM in 75% or more of their transportation infrastructure projects.) This prediction indicates a kind of snowballing momentum, as the companies that are more fully invested in BIM will become even heavier — or more consistent — users of the technology. 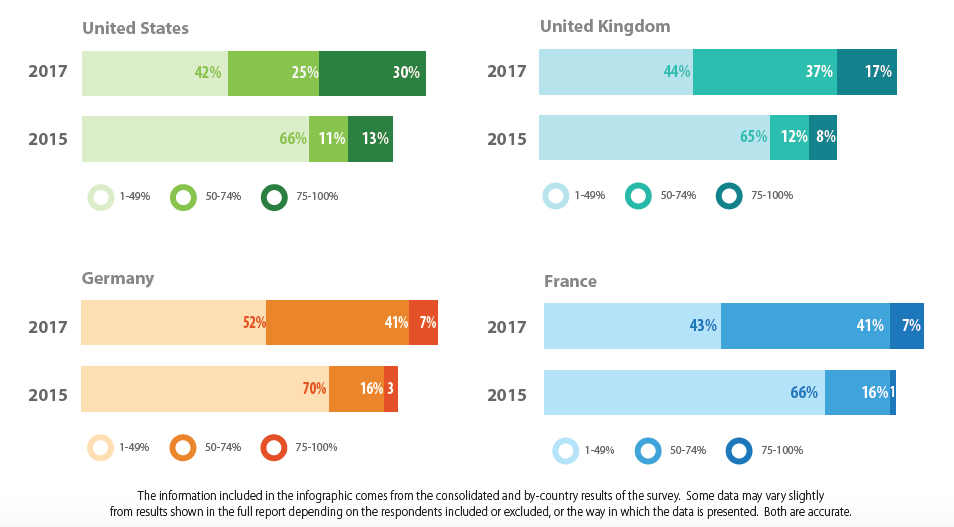 The percentage of projects in which BIM was implemented, and the change in the number of projects from 2015 to 2017. Graphs courtesy of Dodge Data & Analytics.

The Perceived Benefits of BIM

There are multiple external factors that drive BIM adoption, including owner demand and government mandates. The 2017 SmartMarket report, however, found that internal business benefits are also key factors in adoption. The most commonly reported benefits in the group were:

In the 2014 SmartMarket report, contractors cited the following as top BIM benefits:

The vast majority of BIM users in all four countries — 87% — reported that they are experiencing at least some value from BIM. U.S. users topped the value charts at 93%, but also had the highest percentage (43%) who reported experiencing a quarter or less of the total value BIM has to offer. All countries found the greatest value was realized during the design stage (as opposed to post-construction, for example).

The 68-page “The Business Value of BIM for Infrastructure 2017 SmartMarket Report” is sponsored by Autodesk, and is available at no charge to all visitors who create an account on the Dodge Data & Analytics site.