Q&A with Mike DeLacey: BIM and the Rebuilding of U.S. Infrastructure

Microdesk president discusses how technology will support efforts in the coming year to recover from weather disasters and rebuild crumbling bridges and roads.


Late last year, Microdesk announced its annual list of the top five AEC industry predictions for 2013. The company — a consultant and Autodesk partner in the areas of CAD, building information modeling (BIM), geospatial information systems (GIS), and facilities management — states that the coming year will bring a strong focus on implementing sustainable, forward-thinking solutions to rebuild the nation's crumbling roads and bridges.

I had the opportunity to speak with Mike DeLacey, Microdesk president, regarding the rebuilding of America and his belief that AECO organizations must find a new approach to rebuilding that focuses on innovation and technology and on being proactive, not reactive. The tools are available, he observes, and in 2013 more firms will turn to visualization and collaborative design processes to strengthen the nation's infrastructure, including roads, bridges, buildings, and mass transit systems. Following are excerpts from my interview. 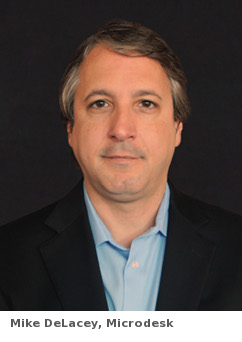 Cadalyst: Why do you believe 2013 will be the year that we see the push for this much-needed rebuilding?

DeLacey: There are a host of different reasons. Certainly, now that the election is over, there's some consistency and stability in what people see happening going forward — you can see that happening in the stock market already, people are feeling more comfortable that at least we have some direction. Historically, we find our way out of a recession by investing in infrastructure. It puts people back to work, it drives the economy, it creates tax revenues. When you combine that with the fact that people are starting to recognize that the U.S. infrastructure really is in poor shape, that tells me that we'll see some pretty significant investment in infrastructure this year.

What exactly needs to change, and why?

From a rebuilding effort, bridges will probably be one of the biggest priorities. You're already seeing it at the state level, such as the $3 billion Accelerated Bridge Program that will replace 250 bridges in Massachusetts. They are using a lot of innovation both in the contracting mechanism as well as from a technology perspective as far as how they go about designing and building these bridges.

So, roads and bridges, from a national consensus, will be a place where a lot of investment is going to happen. Beyond that, we have efforts such as the post-Sandy $60 billion package to rebuild in New York/New Jersey. What we've heard from those state governors is that they will focus on hardening the infrastructure in the region — not just replacing in kind. They will actually design and build to prepare for future [events], for things like rising ocean levels and more severe storms.

Do you foresee an emphasis on redesigning and rebuilding infrastructure from scratch or refurbishing?

On a national level, we'll see a healthy dose of both.

What role do you see CAD-related technologies playing in these efforts?

I would say that the world has very much moved away from CAD and very much toward building information modeling. I believe that there are three reasons for that.

First, using modeling technology at the design level allows for better design because we have an exponentially increased ability to analyze design information to ensure it is as good as it can get.

Second, being able to execute on a construction process when we have an accurate virtual model of what needs to be built allows us to streamline that process and make it more predictable from a scheduling and cost perspective.

Third, owners and the organizations that are responsible for operating and maintaining infrastructure are becoming savvy enough to understand that they want that model at completion of construction and that they can use the information in that model to streamline operations and maintenance processes.

So, the owners of most of the significant infrastructure projects, primarily around bridges, are requiring the delivery of an as-built [BIM] model as part of the contract.

Are contractors typically adopting BIM because of owner mandates or because they recognize the business benefits?

Many general contractors and construction managers are using BIM even when it's not mandated, and they're doing it because they are seeing significant business benefits. In a typical construction process, the traditional 2D design documentation goes to the contractor, who goes about coordinating that documentation and ultimately generates all the fabrication drawings and goes to construction — that's a very difficult and inefficient process. By using building information modeling, we can significantly improve that process by doing all the coordination in the model, validating that we are actually coordinated, and we don't have conflicts in the design documentation, which means we should significantly reduce the requests for information and scheduling delays based on conflicts in the field.

Many contractors are saying that they are seeing 5% to 7% reductions in the cost of construction. DPR Construction, in its expansion of the University of California, San Francisco Medical Center, recently published that they cut $100 million out of the cost of that project by executing the BIM process.

How does a contractor break into the business of BIM?

It is important that GCs begin by building some BIM qualifications. An owner wants to know you've used BIM before, and how you used it. So use it on a non-BIM-mandated project to gain qualifications. Doing it on your own is also advantageous because of money, time, and labor saved. So you're accomplishing two things at once.

The challenge is there is a certain risk factor. For the typical contractor who has been in business for 30, 50, 100 years, the process they use now is very predictable and very comfortable to them. We're asking them to add risk to the project by doing something different, and that can be pretty daunting. And there's an investment of money up front and needing to trust that the investment will offer a significant return on investment.

What is the average contractor looking at in terms of the money and time necessary to transition to BIM?

It's very tough to put hard numbers to the cost, but generally it's anywhere from 300% to 1,500% return on investment for a project that goes well, according to McGraw-Hill surveys of contractors.

Investment and time required depends on the approach. If you hire qualified BIM staff, you face the cost of that labor. Or you can pay a consultant to train current staff. A $70 million, six-story building would be in the $250,000–$300,000 range [for full-service consulting, including software; training and on-site assistance to the contractor over the term of the project; labor associated with modeling the project; incorporating shop drawings and fabrication information into the model; and clash detection and constructability analysis].

Circling back to the subject of U.S. infrastructure, are there additional benefits of BIM or other related technologies that will support the rebuilding effort? For example, the utilities industry is dealing with the reality that much of its infrastructure data resides with individual employees who are retiring, that need to move that information into databases. In other segments of public infrastructure, won't the transition to BIM help address such a challenge?

We're seeing, all over the country, a lot of effort going into exactly that. There's a saying that the value of your data is not what it costs to create, but how many people it helps and the value they gain from it. We are seeing a lot of efforts around not only receiving building information at the end of construction but systems designed to distribute that information in effective ways to as many people as possible.

That dovetails right into scenarios like the recovery from Sandy. The organizations that are responsible [for rebuilding] need to understand what was there before and what the condition is currently to come up with the costs for repair. It all ties together.

When you think of things like LIDAR [light detection and ranging], laser scanning — these are technologies that are here today that can help us capture existing conditions. Hindsight is always 20/20, but imagine if we'd had LIDAR scans of the existing conditions of the coastlines of New York and New Jersey, how much easier it would be to compare them to post-Sandy data to determine exactly the extent of damage and what it would take to repair it.

Those are some of the things we'll see happening now to ensure that we are preparing for future storms and other events by obtaining better information so we can react better to future events.