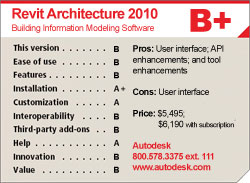 If you've read other reviews about Revit Architecture 2010 or some of the other Autodesk 2010 products, you're aware that they have introduced a Microsoft Office-style ribbon user interface (UI). In the case of Revit, this major change has elicited outcry from many users and has overshadowed many of the other updates in the product. Indeed, there's a lot to discuss about this new UI, and I'm eager to share my impression of it.

What's New in 2010 Before I get into a discussion about the new ribbon-style UI in Revit Architecture 2010, let's first take a look at several of the other new and noteworthy features in this version.

Gradient backgrounds. In Revit Architecture 2010, you can add a background gradient color to 3D views to create some additional depth. Gradient Background is a new option in 3D views under View Properties //var/www/html Graphic Display Options //var/www/html Background. Checking this toggle allows you to define a Sky Color, Horizon Color, and Ground Color. These settings allow you to create a gradient that will blend between the ground or sky color and the horizon color. It's a great addition. Support for elevation views would make it even better.

Filter by view type. Users now can filter views by type. This allows you to create a view template to exercise more control over which views are displayed, such as working views (sections, elevations, and details) that are turned off in a sheet view. You also can create a filter that can hide detail symbols in an elevation view but not in a detail view. There's a lot of functionality in this feature.

Local file creation. Revit Architecture 2010 provides a process for creating local files on projects that are using work sets. At first glance, this feature might seem minor and unnecessary. However, if you're involved in BIM management, you know that local file creation or the lack thereof is a major issue for some users. In Revit Architecture 2010, when you open a project file, the application will check to determine if you are opening a central, local, or stand-alone project. If you are opening a central file, Revit will create a local copy automatically in your default user file path location. If a local copy already exists, Revit Architecture provides an option to overwrite the existing file or append a timestamp to the existing filename. I particularly like the the ability to append a timestamp to the existing file to create an archive copy.

Like many other users, I use scripts to control the creation of local files from central files. The script files I use offer additional functionality and keep the users from having to touch the central file to create a local copy. This capability is good first step, but I prefer using the script files. More information about these scripts is available if you search the Autodesk User Group International Revit forums.

Examples of survey and base point icons.

Halftone/underlay control. In previous releases, the halftone control was limited at best. In Revit Architecture 2010, users can control the specific level of halftone for objects or linked files. Adjusting the line weight, pattern of underlay, and the brightness of the halftones controls this display.

Several other improvements also are worth noting. For example, the Type Selector families display thumbnail images, as shown below, and the cursor can be changed from a pencil to a crosshair.

Users can define color selections for the selection, highlight, and error alert choices (see figure below).

User Interface – aka the Ribbon The Revit 2010 platform also introduces new conceptual design tools, application programming interface (API) enhancements, and some performance and interoperability tools. But the most noticeable and controversial feature introduced in the Revit 2010 platform is the new Microsoft Office 2007-style ribbon UI.

This new ribbon-style interface was introduced in AutoCAD 2009 and in several other Autodesk products for 2010, including AutoCAD Architecture, Inventor, and 3ds Max. Autodesk believes that many customers are using several different Autodesk products and that a common UI should reduce the learning curve and workflow roadblocks. In addition, the new UI is supposed to help new users migrate more easily to Revit Architecture from other products and help existing users discover features more easily.

The first thing users will notice is that the Design bar and all other tools and menus have been replaced and integrated into the ribbon, with the exception of the Project Browser, Options bar, and the View Control bar. The ribbon is divided into tabs that contain the major tool categories. Within these tabs are panels that contain the icons for the tools. The icons for the tools on the ribbon and View Control bar have changed from previous versions to create a consistent look and feel throughout the Autodesk applications.

Toolbars are contextual, meaning that available tool options change based on the operation being performed. This is similar to how the Option bar would change in version 2009 or earlier, except that the entire ribbon with all your tools changes, not just the tool options.

The new UI has brought forward some long-awaited improvements, including multiple-monitor support. This allows you to move the project browser or a tool panel to a second monitor. Certain UI components such as the Project Browser or ribbon panels now have a location memory, so if you change the location of the Project Browser, that will remain constant from session to session until you change it. A quick access toolbar allows you to add any tool, and it can reside above or below the ribbon. Tool tips have been improved to provide more information about each tool.

Pros and cons of the new UI. The Revit user community has seen a great deal of debate as to whether the new UI is more efficient or a hindrance. Very vocal users sit on both sides of this fence. I will try to present both sides of the argument in what has become a very sensitive issue.

Those who like the new UI believe that it is more intuitive overall. The tools are easy to find, the workflow is easier to learn, and the customization is an improvement over previous releases, they say.

Those who dislike the UI generally have two major issues. The first is that the workflow of the ribbon does not necessarily improve productivity but in fact reduces it. An example of this would be tool layout. In previous releases, the locations of basic editing commands such as Move, Copy, and Trim were fixed. No matter which operation you were performing, you always knew where to find those commands.

You can work around this issue by assigning the Move tool to the Quick Access toolbar, but for many veteran Revit users, the loss of consistency is significant.

The second major complaint about the new UI is that Autodesk didn't provide a method for users to migrate comfortably to the new interface. In new versions of AutoCAD, by contrast, you can continue to use the old UI for day-to-day work and explore the new UI as your schedule allows -- or not migrate at all. In Revit Architecture 2010, there is no such flexibility. You must either use the new UI or go back to Revit Architecture 2009.

The introduction of the ribbon also introduces some problems that could impede productivity. Internet Explorer 8 isn't supported and can cause your Revit session to crash. Display-management software such as NVIDIA's nView can also impede the performance of the new graphics display system. Using the Windows setting to control font smoothing also can result in Revit Application menu graphics not appearing.

Some users might like to bash Autodesk -- some more than others – but I will give credit to the Revit development team for at least admitting that the new UI has some issues and trying to carry on a constructive dialog with users about the original intent of the new UI and how to address the problems. This is a strong indication that the Revit development team is looking for a solution to some of the problems that it has created.

The new ribbon UI is a radical change to be sure. Existing users will need time to adjust to the changes for menus, toolbars, and the design bar and type selector. The change in workflow and constantly changing ribbon will require time to learn. But the UI in previous Revit releases was admittedly outdated, and Autodesk's the premise behind the change has merit. If you recently upgraded from Office 2003 to Office 2007 and were able to make that transition, you should be able to make the transition from Revit Architecture 2009 or earlier to Revit Architecture 2010.

In short, it seems that users (including myself) who allow sufficient time to learn and become accustomed to Revit's new UI ultimately give it more positive than negative reviews.

Conceptual Design Tools Revit Architecture 2010 also introduces many new conceptual design tools for creating flexible forms. If you've had the opportunity to see one of the many Autodesk product demos of the massing tools, you're probably aware that these tools have the potential to create some very intriguing geometry. You can still generate masses and blob buildings, but the new features of the conceptual modeling tool also can help you create building components such as curtain-wall forms. Conceptual modeling can be controlled entirely through the API, which could lead to formula-driven form making.

About the Author: Patrick Davis