Signage Planning Gets a Boost from BIMLink

Wayfinding studio uses software from Ideate to move Revit data into Excel, and vice versa, cutting project time by half and reducing costs.


Finding your way in an unfamiliar building or city can be challenging and time-consuming. The same is true for the process of creating and editing the specifications for signage that will help people navigate new environments. Signage specs typically reside in the building information model (BIM) but are often buried layers deep, making them virtually invisible to BIM users and inaccessible to the non-BIM users who plan and update wayfinding systems.

Ideate BIMLink software simplifies and accelerates the signage-planning process by enabling users to move signage specs from Autodesk Revit to Microsoft Excel, where they can be easily reviewed and updated by non–Revit users, then transferred back into the Revit model without time-consuming manual intervention from Revit users. At the HDR Wayfinding/Signage studio, Ideate BIMLink is enhancing workflows, making the best use of Revit and non–Revit users' time, and decreasing the time required to create message schedules by half to two-thirds.

HDR is a global employee-owned firm of more than 7,500 professionals in more than 185 locations. The firm provides architecture, engineering, consulting, construction, and related services, creating designs for urban environments, campuses, and buildings in diverse markets around the world. HDR champions advanced tools such as BIM, which help its professionals effectively collaborate to produce higher-value designs. HDR has been using core BIM principles on nearly all its projects since 2001, and has been an Ideate BIMLink customer since version 2011.

Wayfinding presents significant challenges due to immense amounts of disparate data that must be incorporated into BIM models primarily designed for other purposes. Rick Sorensen, Wayfinding/Signage, HDR, illustrated these challenges by using an elevator directory analogy: On the wall of a multi-story office building, the directory usually includes line after line of information to clearly indicate which businesses and organizations are located on each floor. Sorensen explained, "In a Revit model, you can only see one data line at a time, but we still need to have multiple lines of data contained in the model, accurate, up-to-date, and retrievable.

"We also have people in our studio who do not use Revit and know nothing about it; their expertise lies in situational planning. They contribute different pieces of the data puzzle, such as the messages that direct people to get from point A to point B."

HDR Wayfinding/Signage looked for a way to streamline several processes. The studio needed a way to take the data created by non-Revit-using team members and incorporate it into the Revit model. They needed to do it without using hours of their Revit users' time. Additionally, once incorporated in the model, they needed a way to easily access the hidden data.

According to Sorensen, "With Ideate BIMLink, we can take full advantage of Excel's capability to reveal multiple lines of data at once. We may not be able to see all the wayfinding and signage data in the model, but we can see it all in Excel.

"Ideate BIMLink gives me a tool that helps the people in our studio who aren't familiar with Revit. They can review the data in an Excel format and change or verify the data as needed. I can then bring the data back into the model, where it can be incorporated into our final message schedules." 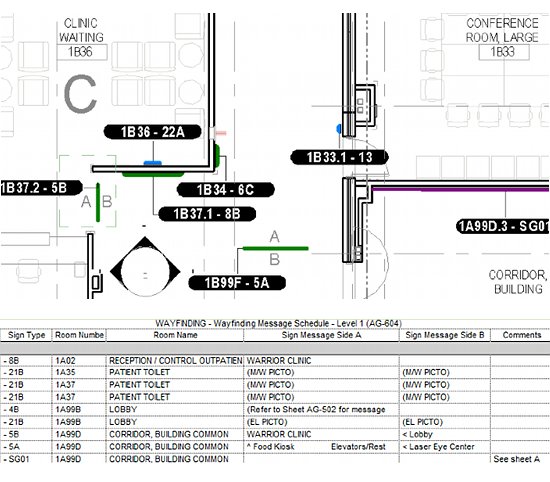 Ideate BIMLink enables users to take data — including unseen data — from Revit (above, top) and move it into Excel (above, bottom), where it can be viewed and manipulated before being moved back into Revit.


Sorensen does not have to spend any time thinking about model integrity. He receives input from the non-Revit-using members of the studio team in Excel. As a Revit user, he tasks Ideate BIMLink with pushing the Excel-checked data back into the BIM model. The enhanced efficiency allows for a better end result and greater value to the owner.

Planners within the HDR Wayfinding/Signage studio have one focus — to devise means to orient people so they can get from point A to point B and back again. If the studio team was forced to do their planning in Revit, the resultant growing pains would slow productivity to a standstill.

The division of labor with the help of Ideate BIMLink allows Sorensen to focus on Revit-based functions, which are his realm of expertise, and allows the planners to use the capabilities of Excel, which is where their expertise lies.

Sorensen said, "With Ideate BIMLink, I can take all the long strings of wayfinding and signage data that planners in our studio give me in Excel, and input them into the model. In the past, I would spend three days at a specific data management task that I can complete now in one-half to one-third the time. As for cost savings, we are limited on our hours per project. Anything that saves us time saves us money."

About the Author: Craig H. Dodge