Ads help support our ability to provide you all our articles and papers at no cost to you. Thank you for your consideration and support.
File Sharing/Publishing


Autodesk BIM 360 Docs, which was released as a commercial offering early last year, received a substantial extension in December with the launch of a mobile app for Android-based smartphones and tablets. The new Android version joins the existing iOS version to provide more mobile users with BIM 360 Docs functionality. Both apps are free. BIM 360 Docs offers a paid subscription tier and a free tier; the latter provides access to a single project, with some feature limitations.

Although iOS is the most widely adopted platform in the mobile construction market — 65.6% of construction companies are currently using iOS devices, according to the 2016 Construction Technology Report from JBKnowledge — more than one-third of the surveyed companies are currently using Android devices. “Android as a platform is pretty significant [in this market],” said Peter Billante, senior marketing manager for BIM 360. “We’re happy to add it, we think it makes sense.”

The Google Play app store indicates that the Android app has 500–1,000 installs at this time. Autodesk declined to share specific adoption numbers, but Billante noted that the new app had been very well received in the three weeks since launch. “It’s typically not the best time to launch a B2B app as people are about to head out on vacation … but the growth rate has been pretty fast, even in the holiday season.” Autodesk has had “nothing but positive feedback” since the launch, Billante reported: “We’ve gotten a lot of customer love.” 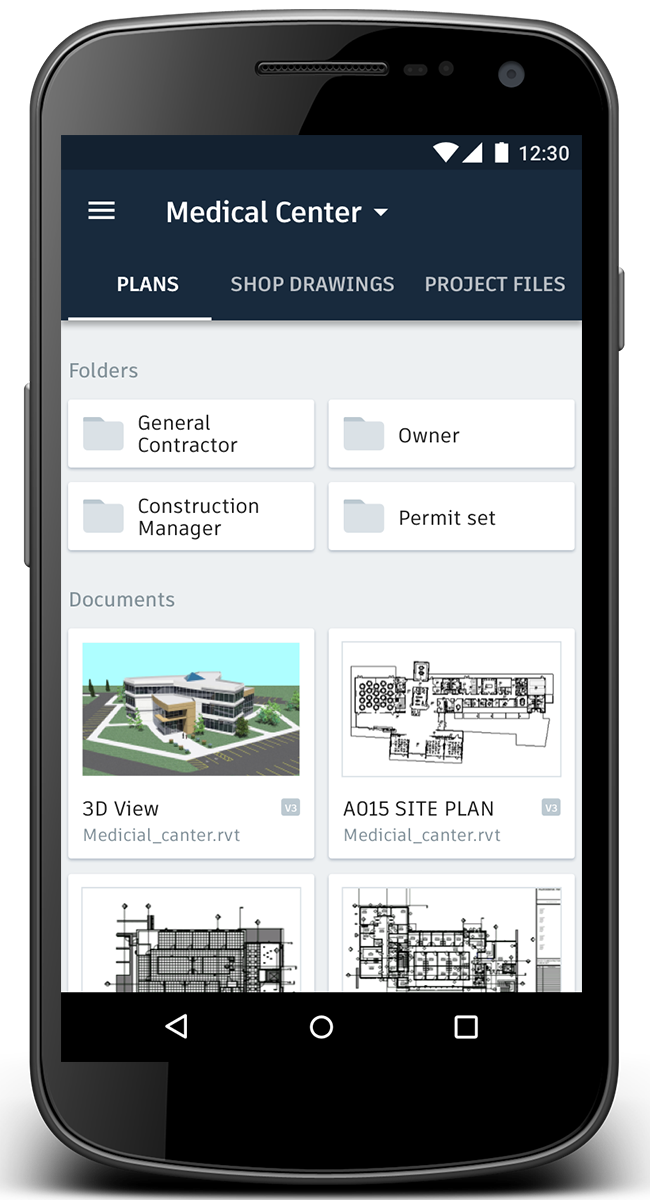 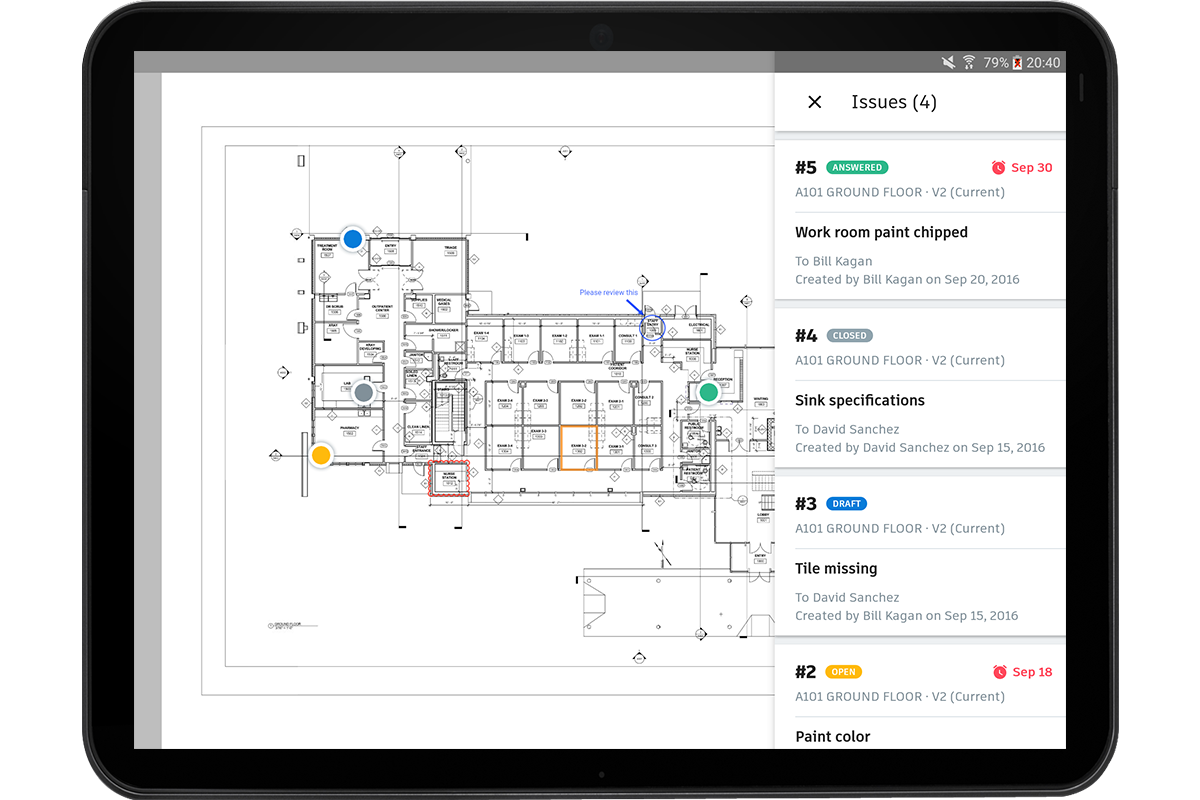 One of a half-dozed solutions in Autodesk’s BIM 360 construction management software family, BIM 360 Docs is a web service for construction document management. It’s designed to help ensure that everyone involved with a project is always using the latest version of all associated documents, plans, and models, whether they are in the field or the office. Autodesk argues that using a host of standalone apps to keep everything organized is counterproductive, leading to a proliferation of “current” file versions and an increase in confusion.

BIM 360 Docs was designed to eliminate those problems by providing a “single source of truth” for projects and enabling users to:

Because storage is cloud-based, BIM 360 Docs scales as needed to accommodate any number and size of documents. “That would be very hard to do if you had [to rely on] your own servers,” Billante noted. With thousands of drawings and plans, plus all the revisions to each, “the numbers get really high,” he explained.

But with documents in the AEC realm, quantity is only part of the burden — complexity is another. “There’s so much detail and depth in all these documents being stored,” Billante continued. That complexity is one burden placed on any document management tool that’s tailored for construction environments; another is the ability to handle both 2D and 3D workflows and documents. “The majority of other solutions out there don’t offer that natively on both Web and mobile,” said Billante. “I think that’s pretty significant … you can standardize your entire company on it.”

Billante believes that the dominance of iOS in the construction market today can be explained by choices made years ago: “When the iPad came out in 2010, [many construction professionals thought] ‘iOS is the safe way to go, stuff works, it’s easy to use.’” Those who had looked into the Android platform as an option had done so “too early,” before it was fully developed and could meet their needs. “Now, Android has caught up, people are starting to see the maturity of the Android platform, and it makes a lot of sense,” said Billante.

The new Android app “takes advantage of the familiar Android [user interface]” and provides access to all of the user’s BIM 360 Docs projects. Autodesk reports that the app currently features:

There are more features in the works, however. “Any good product is never done, especially in the [fast-moving] mobile world,” Billante declared. Autodesk plans to “rapidly iterate” on the BIM 360 Docs Android app — as it has done with the iOS app, which has received updates at roughly two-week intervals, he noted. Customers can expect that releases will occur whenever new features are ready, and not according to a particular schedule. The company is currently preparing offline capability for the Android app, which is “very important for construction sites, where Internet connection is not guaranteed,” Billante observed.

In addition to further development of the apps, Autodesk hopes to further develop the market for them. According to Billante, the construction market holds big opportunity in the form of customers who are still using older documentation methods — and in some cases, are reluctant to change. That can be due to the expense or training involved, or because of tradition. Although the paper-based model contributes to major industry problems, including waste and rework, it still hangs on. “Paper is expensive in construction,” Billante said. “[But] it is rooted in a history of the way construction projects were done.”

Although there are many reasons to resist change, one obstacle has been cleared out of the way, Billante explained. Historically, purchasing mobile devices for employees was a cost that gave some companies pause. But now, smartphones are ubiquitous.

In addition, as more companies embrace modern document management, the technology becomes more appealing to those that have yet to switch. “In a risk-adverse industry, they’re looking for successes — methods that have proved to be successful — that they want to adopt,” Billante observed.

Ultimately, the most persuasive argument for adoption of a modern document management system is that construction professionals would rather be solving construction problems, not tracking down papers. With BIM 360 Docs, said Billante, “People are now able to focus on the work they’re there to do, and to do it right the first time.”