User Review: CAD-based tool for quality-inspection reporting allows one person to do the work of five and still meet the demands of customers.


Editor's note: This article was originally published in the Winter 2010 edition of Cadalyst magazine.

MIC Group is a contract manufacturer of complex machined products and assemblies, specializing in exotic metals and serving the oil and gas, aerospace, and defense markets. A subsidiary of J.B. Poindexter Company, we have operations in Brenham and Houston, Texas; Duncan, Oklahoma; Monterrey, Mexico; and Kuala Lumpur, Selangor, Malaysia.

As a contract manufacturer, MIC Group must provide inspection data sheets with true, measured dimensions for every part we ship. On average, our parts have 300 dimensions to verify, and they often have as many as 1,800 elements. A tool called InspectionXpert First-Article has enabled our company to reduce this verification task from a five-person job to a one-person job, all while reducing job lead times and improving the accuracy of reported data. 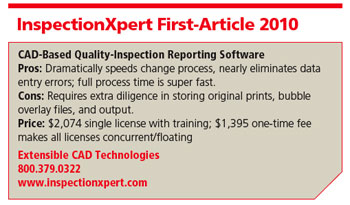 Launched in 2005, InspectionXpert was designed to simplify the process of creating inspection forms and ballooned inspection drawings for first-article and in-process inspections. These reports and drawings are created directly from CAD drawings of just about any file format, including AutoCAD, SolidWorks, and Solid Edge, as well as CAD-neutral raster formats such as PDF and TIFF. The InspectionXpert platform is also fully integrated with many popular CAD packages including AutoCAD, SolidWorks, Solid Edge, Pro/ENGINEER, and CATIA V5, and even more integrations are in the works.

Dimensioned drawings come to MIC Group in PDF and TIFF formats from a variety of customers, and with continually changing revisions. We use InspectionXpert First-Article 2010 to:

These vital functions are easily recognizable by any manufacturer that works with prints and must deliver a data sheet deliverable in addition to a part. What is often overlooked, however, is how much opportunity for improvement exists in this standard process.

In my experience, companies use hand bubbling, Adobe Illustrator, CAD systems, and a variety of other suboptimal tools to move quickly through one facet or another of the process, and they typically treat the three processes above as discrete activities to be performed by different people.

The most powerful advantage of InspectionXpert First-Article 2010 is that it completes these three tasks simultaneously and in less time than any one of them could be performed using any other familiar method. When you evaluate collapsing these functions, you aren't just looking at an improvement in one area — instead, it's a total process that, in our experience, is five times faster. 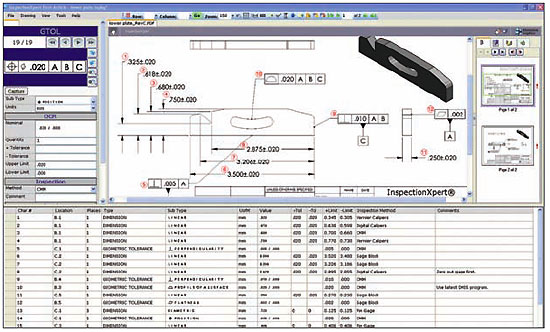 The InspectionXpert First-Article user interface shows sequentially numbered balloons that are automatically added to a print each time a user highlights an element.

Each time you highlight an element, a sequentially numbered bubble is added to the face of a print, and the actual image of what was highlighted is transferred to the inspection sheet. 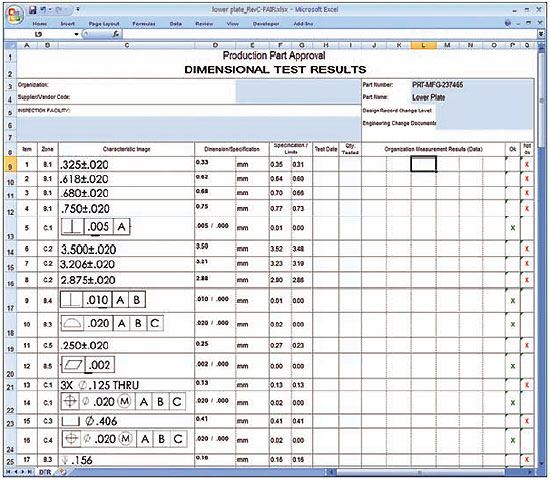 The Dimensional Test Results report is automatically populated in Excel from a user-customizable template. Standard forms for Automotive (PPAP) and Aerospace & Defense (AS9102, EN9102) are included with the software.

During export, the software creates a PDF of the bubbled print, in addition to an Excel data sheet that contains the image from the print (or text if you choose to use the optical character recognition function). The process involves no redundant typing and there is no opportunity for human transcription error. Drawing comparisons generate red (removed) and green (added) visuals to clearly indicate what has changed. 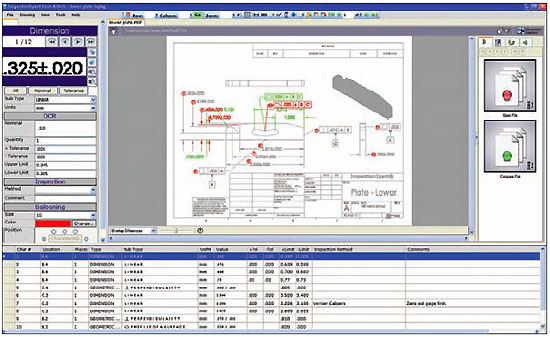 The table "Time Savings Using InspectionXpert" details a real-world example of our time savings. If I assume two revision cycles per part life that require two drawing comparisons or rebubbles, using this tool reduces the time required by more than 80%. We are doing in 2 days what would have taken 11 before. We currently have one person working full-time performing this job function. Without InspectionXpert, we would need at least four more employees to keep up with the current workload. The difference amounts to an annual savings of $120,000 per year based on a $30,000 employee salary!

The learning curve for InspectionXpert is not a steep one. Our users typically are comfortable enough to use the tool after less than one day of training, and become fully operational after less than a week of training and use. Jeff Cope and the staff at Extensible CAD Technologies have been very diligent in developing InspectionXpert First-Article 2010 to ensure optimal functionality. At this point, MIC Group users would mutiny if anyone suggested taking away this tool.

I recommend InspectionXpert First-Article for anyone involved in contract manufacture using prints and data sheets. Original equipment manufacturers would do well to use the tool to provide data to their subcontractors, reducing the time required to receive product on the dock and increasing standardization across suppliers. Contract manufacturers can benefit from reduced costs, lead times, and data entry errors.

About the Author: Nathan Byman