Trendy crowdsourcing is fueling product innovation — and the disapproval of some professionals.


Editor's Note: This article was originally published in the Winter 2012 issue of Cadalyst magazine.

Let's assume you're a CAD operator working in an engineering office, harboring enthusiasm for the all-American automobile. Maybe you've tried to break into the automotive design field, but found it difficult to do so — not to mention risky, given the still-questionable health of U.S. car manufacturers. Still, your dream of designing a car persists, and you often find yourself absentmindedly doodling on a napkin. If you had the opportunity to be part of a community that offers design input on a new car — on your own time and without the promise of any compensation — would you participate? For many, the answer is a resounding, "Yes!"

This act of sourcing tasks traditionally performed by specific individuals to an unrefined large group of people or community is called crowdsourcing, according to the definition on Wikipedia (which, by the way, likely is the most widely used crowdsourced product in existence). Typically accomplished through an open call for participation, crowdsourcing is becoming increasingly popular in the design world thanks to the Internet and easily accessible CAD technologies.

One U.S. company is going all-in on the crowdsourcing trend. Local Motors, based in Chandler, Arizona, is said to be the first car company to crowdsource all aspects of its design process. The company relies on an open community of contributors — mostly designers, engineers, and car enthusiasts — to create its products and components through competitions on its web site. Its first vehicle in production is a Baja racer called the Rally Fighter. Although street legal, the car is designed for off-road and desert racing in the American Southwest. 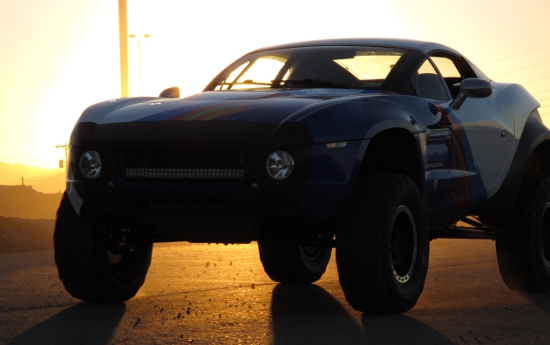 Local Motors relied on crowdsourced design to create the Rally Fighter off-road race car in 18 months' time and at a production cost of "a couple million dollars." Image courtesy of Local Motors.


The brainchild of Jay Rogers and Jeff Jones (who no longer is with the company), Local Motors was created in 2007 to design higher-quality vehicles for niche markets more quickly and cheaply than a traditional car manufacturer by engaging a community of enthusiasts in the development process. At first glance, crowdsourcing auto design might seem like a great way to kill a car company. In Detroit, after all, automakers stay competitive in part by keeping new models and body styles close to the vest.

But what does that strategy ultimately yield? Mike Pisani, senior engineer and builder trainer at Local Motors, explains that in the traditional auto design paradigm, the design side of the brand spends years and millions of dollars creating a new or updated body style with bold, sleek lines, then promotes it as a concept car at an auto show. Once the oohs and aahs have subsided, the body styling gets passed over to the engineers who have to make sure that the car is manufacturable, street-legal, and safe. When the highly touted new vehicle appears on the road 18–24 months later, it often is a watered-down interpretation of the original concept.

"What we do in [the Local Motors] process is avoid those pitfalls early on by keeping both the engineer and designer plugged in, but also — more importantly — the enthusiast," Pisani says. Alexis Fiechter, senior engineer and engineering community development, further explains that by pulling together representatives from design, engineering, and the community at large, Local Motors has created a design process that revolutionizes the opposing design and fabrication processes so that they work in concert. As a result, what takes Detroit multiple years and hundreds of millions of dollars to accomplish, Local Motors did with its crowdsourced Rally Fighter in 18 months at a production cost of "a couple million dollars." 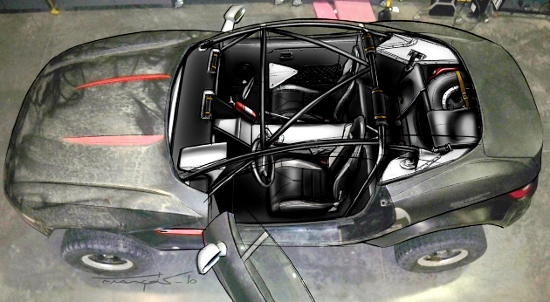 To illustrate the Rally Fighter's interior, Aurélien François, community liaison and design at Local Motors, used Photoshop to draw on top of a photograph. Image courtesy of Local Motors.

When you think about it, the idea of crowdsourcing auto design really isn't that far out there. "Honestly, it's sort of an inevitable progression from where we were before," states Fiechter. "You already have automotive companies that engage in focus groups, and you already have people trying to engage the end-user group faster, and you have interaction between the various disciplines happening as a necessity in the development process, so it made sense to try to aggregate a more diverse group earlier. If you agree to that, why not go outside of your enterprise?"

Local Motors designs in SolidWorks and CATIA (both from Dassault Systèmes) as well as Solid Edge (Siemens PLM Software); however, its community of designers uses practically every design software in existence. Google's SketchUp is one of the most commonly used platforms thanks to its zero-to-minimal cost, which appeals to nonprofessionals. When Local Motors designers have trouble altering models created using outside vendors' software, they turn to synchronous technology in Solid Edge, Fiechter says. The direct modeling tools have been "hugely beneficial" by allowing a great degree of functionality when the team works with nonnative formats and files.

Local Motors takes what Fiechter calls a passive approach to dealing with multiple CAD file formats: "Accept as many formats as you can and try to provide the best functionality to deal with the nonnative formats, and people will convert to take advantage of the scope of interaction."

CEO Hardi Meybaum and CTO Indrek Narusk, founders of GrabCAD, also make a business of tapping the design power of the masses. In addition to connecting CAD users with companies that need temporary CAD support, GrabCAD organizes design contests called GrabCAD Challenges. A manufacturer can initiate a challenge by posing a design problem to GrabCAD's community of more than 41,000 members and offering a prize of its choosing to the member whose design is selected by judges. Professionals can and do submit designs, but GrabCAD also encourages nonprofessionals to engage in the process. The manufacturer gains design feedback in a matter of weeks that GrabCAD claims is comparable to the work of a 100-person engineering team. 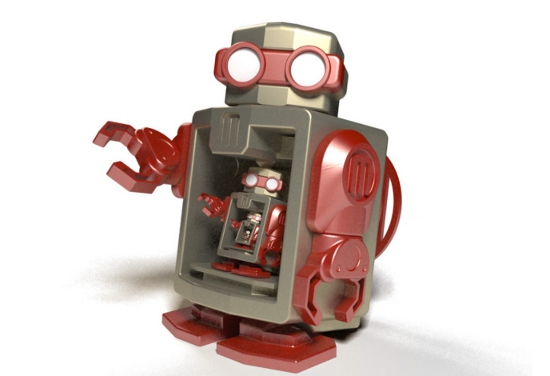 Brent Rosenburgh won a MakerBot Industries Thing-O-Matic 3D Printing Kit when he beat out 88 other entrants in a GrabCAD Challenge to design "a 3D-printable, cute robot mascot" for MakerBot. Image courtesy of GrabCAD.


Amarok Racing posed a GrabCAD challenge to redesign the triple clamp of an electric super bike and received more than 150 proposed solutions in 14 days for a $500 prize. On the GrabCAD web site, Amarok Racing cofounder Michael Uhlarik says, "The amount of entries was amazing. We were literally fighting over which ones we liked more, and impressed like hell with some of the original thinking." 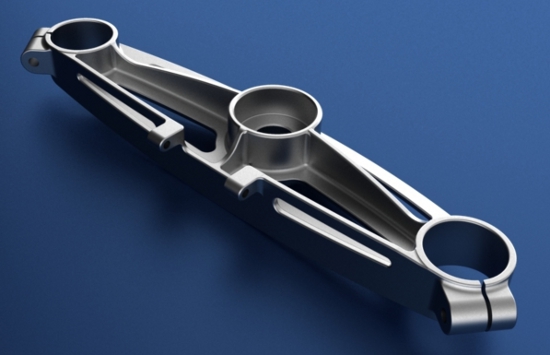 Danny Tas's model was one of 128 entries in the GrabCAD Challenge to redesign the triple clamp for the Amarok P1 zero-emissions race bike. Tas took home first-place honors, an iPad 2, and the opportunity to be featured on the Amarok Racing web site. Image courtesy of GrabCAD.


With CAD as its primary mode of information exchange, GrabCAD, like Local Motors, must deal with files in myriad formats. Meybaum says that when it comes to tapping a diverse community of engineers from around the world, neutral data-exchange formats such as STEP and IGES are essential to collaborative design.

When it comes to how crowdsourcing affects the design and engineering professions, the issue can become contentious. Phil Bernstein, vice-president of industry strategy and relations for Autodesk AEC Solutions and a professor of architecture at Yale University, believes that crowdsourcing is at odds with the professional nature of design. Bernstein is passionate about the role of architects and engineers in providing a critical service that benefits mankind, as well as their solemn responsibility to safeguard the public from careless design decisions. The ability to protect structures' inhabitants is achieved largely through ongoing professional education.

"Before the term was relentlessly diluted by current vernacular, professionals were persons designated by society to have special education, experience, and responsibility to enable social good," he opines. "In the case of architects and engineers, that obligation is specifically tied to the protection of the public's health and safety. That obligation — to take personal responsibility for those issues — is considered to be in the social interest. That's why we have doctors, lawyers, architects, and engineers."

Bernstein continues, using as an example integrated project delivery (IPD), the collaborative process between architect, builder, and owner that is an offshoot of BIM technology. "Crowdsourcing design is, at some level, on the same continuum as integrated project delivery and based on the principle that multiple perspectives can only enhance results. Inasmuch as seeing and collecting those points of view is important in the name of full exploration or examination, it's all good. But even in IPD projects, we still need someone who is ultimately responsible for ... sorting and integrating all these ideas, and more importantly, taking responsibility for the results. Buildings are necessary to human welfare, and you can't delegate that responsibility to a crowd of anonymous folks on the Internet. Sources of ideas are one thing; their use, another."

Bernstein's point about the need for accountability where public safety is concerned is valid, but also suggests that there is a place for crowdsourcing in AEC provided the necessary oversight is ensured. Continuing Bernstein's analogy of IPD and crowdsourcing, when IPD was introduced, there were many who claimed that it would be the end of architecture firms as we knew them. The fear was that building services would shift to design-build firms almost exclusively, and there was a widespread belief that design eloquence would yield to the mathematics of engineering. Clearly that hasn't happened, and in some circles IPD is taking hold as one of the greatest innovations in design since the curtain wall. Crowdsourcing could further enrich building design by opening up the creative field to new ideas and sources.

Matt Lombard, an independent mechanical engineer and CAD contractor, errs on Bernstein's side and doesn't mince words when voicing his opinion. On his Dezignstuff blog, Lombard writes that crowdsourcing can lead to disregard of professional standards such as fair payment, legal use of software, and assurance that submitted work is original. "It disrespects the source of the work and the design itself. It may turn out that there are some people willing to be disrespected to get the chance at being severely underpaid, but if it becomes widespread, it will lower standards so that anyone with any sort of graphics software becomes an ‘engineer.' … This is not good for engineering, manufacturing, or any related profession." Lombard later told Cadalyst, "I contend that those doing this work are not professionals, but the equivalent of strikebreaking scabs."

Despite the potential pitfalls, fans of crowdsourcing such as Local Motors' Pisani believe that opening up the design process to hobbyists elevates the power of design by challenging preconceptions and heightening awareness of fundamentals.

GrabCAD's Meybaum agrees with Bernstein when it comes to the need for accountability in crowdsourced design. He believes that proper accountability and oversight by professionally trained engineers and architects is essential to the viability of any crowdsourced design. However, Meybaum states on the GrabCAD blog that the "goal at GrabCAD is to make the engineer's life better by eliminating traditional barriers, so we can all use better products in our everyday lives. If you take a look at the barriers in our industry — barriers between CAD software, companies, fear about [intellectual property], cloud, etc. — this blocks the route to better products. My true belief is that we can only achieve better products if we take a more open approach to engineering."