Herrera on Hardware: New tools are needed for efficient CAD collaboration, and the cloud — from workspaces to hosted workstations — is looking like the best place to find them.


OnShape's solution stores project data in a shared, unified cloud resource. But it also provides OnShape's own 3D CAD application — as well as a complete 3D CAD machine — in the cloud, meaning the OnShape CAD application runs in the cloud. Because the entire CAD machine runs as a virtual instance in the cloud, the end-user client can be just about anything: a Mac, Linux, or Windows PC; a Chromebook; or even an iOS or Android phone or tablet. Leveraging the Parasolid parametric modeling kernel (comparable to that used in SolidWorks and Siemens NX), OnShape relies on browser-supported WebGL and any client-resident graphics processing unit (GPU) for accelerating interactive graphics. OnShape also counts on a large number of third-party partners to support CAM, finite-element analysis (FEA), and high-quality rendering.

Frame's approach is similar to OnShape, with two important differences. First, it is designed to run any Windows or Linux application in a browser. That is, Frame is not in the business of marketing a CAD package, but instead enables you to run your existing CAD application — or any other type of Windows or Linux application — in the cloud via a browser. Second, Frame's environment does not use WebGL and client hardware for graphics. Rather, all graphics processing is performed on the cloud-hosted virtual machine (optionally accelerated by Nvidia GRID GPUs in the cloud), with only image pixels transmitted to the client via browser.

With Frame, users bring the applications they're currently using, choose a cloud infrastructure, select an authorization manager, and connect to files in the cloud. Users essentially install an application as they used to, but that installation happens not on a client workstation or PC, but in the cloud, running on a virtual machine hosted by providers such as Amazon Web Services or Microsoft Azure. The Frame ecosystem supports popular single sign-on (SSO) managers and cloud storage services, including Dropbox, Google Drive, and Box. With Frame, no special client is required — any device that can support an HTML5-capable browser will work, opening up a wide range of devices, from Macs, PCs, and thin clients to phones and tablets.

Frame users can select a virtual machine to suit their current needs, and swap for other machines as those needs change. Run an aptly named Air instance for light work, then switch to a GPU-accelerated Pro 16GB instance for mainstream 3D work. For all-out performance, users can now choose Frame's Pro 64GB instance, a "graphics supercomputer in the cloud" that delivers a whopping 16 CPU cores and 4 Nvidia GRID GPUs, which would compare favorably to a conventional, maxed-out, high-end deskside workstation costing $15,000 or more. Depending on the plan, access to that Pro 64GB machine can cost as little as $3.60 per hour to run applications like Autodesk AutoCAD, Inventor, and Revit; SolidWorks; Siemens NX and Solid Edge; and Ansys Workbench — all certified to run on Frame's platform. 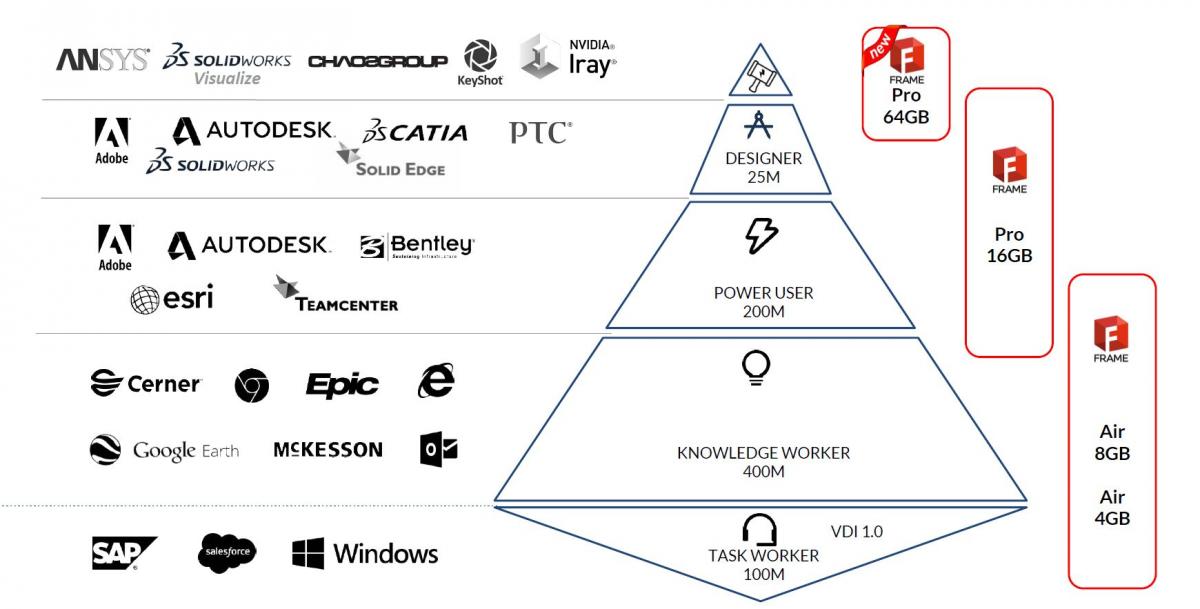 Benefits of Hosting in the Public Cloud

For most things, be they homes or cars, we tend to assume it's better to own than to rent. But renting IT has its perks. On-demand leasing of not only a workspace but users' machines (in virtual form) in the public cloud offers advantages that go beyond what even virtualized private datacenters can.

The public cloud's elasticity piques the interests of IT managers and CFOs alike. Deploying a fixed amount of hardware delivers a fixed level of computational resources — no more, no less. With a virtualized datacenter, those resources can be sliced in flexible ways, but still, capabilities can't grow as the project or business does. And on the flip side, hardware may sit idle during project lulls. With the cloud, however, you invest nothing to start and pay only for the resources you need, then add — or reduce — resources according to project demand.

A public cloud advantage: rent only what you need, for only as long you need it. Image courtesy of Frame.