Ads help support our ability to provide you all our articles and papers at no cost to you. Thank you for your consideration and support.
Product Lifecycle Management (PLM)

Design Processes — Not Tools — Are the Biggest Problem in Product Development, Onshape Finds

Survey indicates that product design and manufacturing teams are concerned with communication, version control, and project visibility above all else.

In the CAD world, attention is often focused on the capabilities of software tools; powerful new features and technologies are presented as the key to hurdling all kinds of obstacles. But when it comes to achieving higher levels of productivity and innovation in product development, the survey respondents clearly do not believe that new and better tools are a panacea. “I love additive manufacturing, I love generative design — but I was surprised at how low those things were in this survey,” Onshape CEO Jon Hirschtick told Cadalyst.

Instead of upgrading their tools or obtaining new functionality, respondents were more interested in improving design processes. Communication was the top concern reported by individual contributors at larger companies, with 89% desiring “earlier and better communication” among members of the extended design team (comprising internal and external partners). Version control was a close second: 86% of respondents in this same group reported that they need to reduce errors resulting from working on the wrong version of a design, or from receiving important information too late.

Managers and executives at these companies identified visibility as their top priority; 89% want to monitor their product design team’s progress at any time without holding meetings, sending e-mails, or making phone calls to do so.

Hirschtick was triply surprised by the high percentages of respondents who reported use of a product data management (PDM) and/or product lifecycle management (PLM) system (58%), who said it helps avoid costly mistakes (82%), and who said “there has to be a better way” than PDM/PLM (72%). “These three things are all good news for us,” he noted. 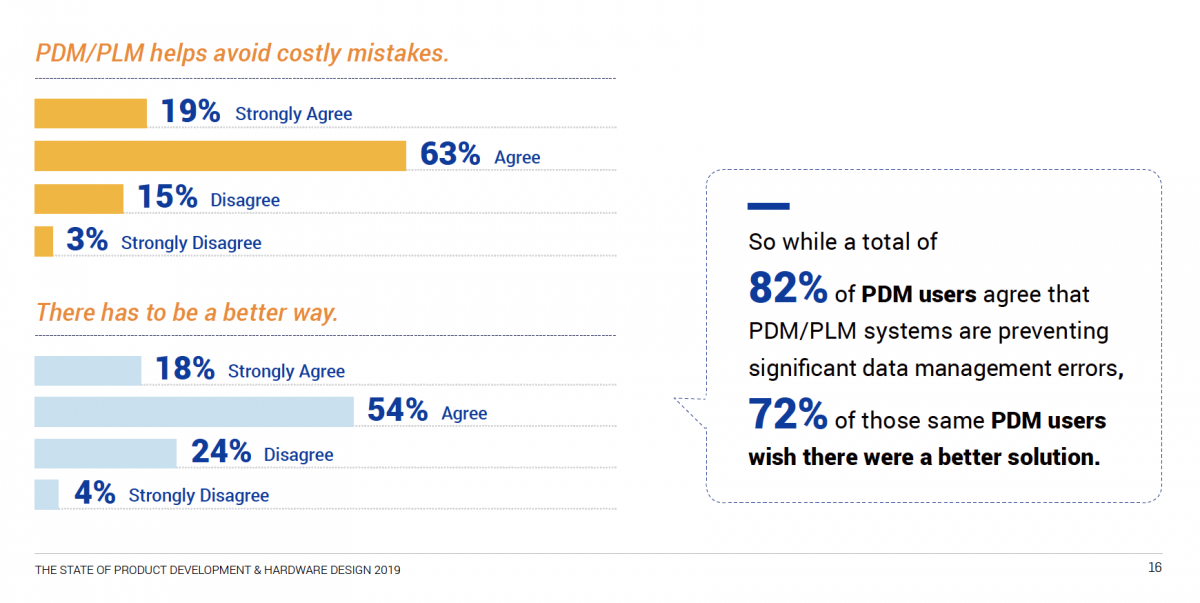 Hirschtick was not surprised, however, to see that many respondents said PDM/PLM slows down the design process (45%) or blocks access to their design data when they need it (42%). “Data management is getting to be a hotter topic than it used to be,” he observed, thanks to companies designing more-complex products, moving faster and generating more iterations, and working from multiple locations with more people. “Every one of those things points to a need for some kind of control [over data],” Hirschtick said.

He pointed out that “almost everyone does data management already.” Even those companies that don’t use a formal data management system rely on informal (and frequently risky) approaches, such as renaming and copying folders through Windows File Manager.

Validation from the Voice of the People

Although the survey results held some surprises for Hirschtick, none of them pointed to a need for a new company direction, he confirmed. “I feel pretty good about the modules we’ve built … confident that those areas are good investments for us,” he said, referring to Onshape modules addressing release management, analytics, custom workflows, bills of materials, etc. (For other capabilities, such as generative design and simulation, Onshape works with partners that specialize in those technologies.) “[The survey] also told us that our cloud strategy is a good one,” he said; most respondents who consider themselves to be “innovative” indicated that they have embraced cloud-based productivity tools.

Although the results may indicate that Onshape is on the right path, Hirschtick believes that the company faces “a lot of work to get those modules to the depth that we want”; for example, adding the ability to override mass properties as measured by the system. Other goals include giving users more control over their release management process and helping them create geometry more efficiently.

Hirschtick is also determined to increase performance; “No system I’ve worked on is ever fast enough” seems to be his credo. The ability to draw on essentially unlimited cloud computing resources should guarantee speed, but there’s still work to be done, Hirschtick said. He used the example of a large model that took 4 hours to import in a competing solution, and 45 minutes in Onshape: “The customer was happy, but the bad news is, it still takes 45 minutes.”