Ads help support our ability to provide you all our articles and papers at no cost to you. Thank you for your consideration and support.
Product Lifecycle Management (PLM)


Question: How do you move a four-day event of approximately 1,500 attendees from Nashville, Tennessee, to Dallas, Texas? Answer: Quickly! That's what had to happen for the Siemens PLM Connection User Conference 2010 after floodwaters in May closed the original Nashville conference venue, forcing relocation to Dallas a mere month later. Event organizers were as skilled as they were swift, as the conference seemed to go off without a hitch.

Organized by Siemens PLM Software and the independent user organization PLM World, PLM Connection is a learning and networking event. Siemens PLM Software invited about three dozen industry analysts and members of the media to attend keynotes and other presentations for the first day-and-a-half of the conference.

Tony Affuso, Siemens PLM Software CEO, welcomed attendees on the morning of Day 1 and quickly moved on to discuss the position of Siemens PLM in the market. According to research firm CIMdata, the Teamcenter digital lifecycle management solution and Tecnomatix digital manufacturing solution are leaders in their respective product categories. Affuso reported that Siemens PLM signed 4,000 new customers in the past 12 months and that its software is used by 24 of the 25 top automotive OEMs. He added that his company's products have a growing presence among shipbuilders — "not an area where we're traditionally strong" — who use NX and Teamcenter because they offer fast and easy visibility of design data and changes. "I think that's why we're winning in this area."

What's New
HD-PLM. In May, Siemens PLM Software introduced HD-PLM that builds on the company's HD3D concept introduced last fall. Where HD stands for high definition, HD-PLM means that product-development software tools can surface the right information when you need it, offering an "in-context, decision-support environment that turns widely distributed data into knowledge." A framework of tightly integrated solutions will permeate Siemens PLM enterprise applications, including upcoming releases of NX, Teamcenter, and Tecnomatix. Users will have a network of cross-domain information to make decisions that are relevant to their work and take into account the effects on the other domains, both upstream and downstream.

An HD-PLM enabled system will, for example, recognize a given user as not just a CAD operator, but also a power-train engineer or an airfoil designer and automatically personalize the workspace to put that individual in the right context for the tasks being performed. The system then will proactively assist the user in accomplishing tasks by informing him or her of issues to be addressed, seeking out pertinent information to consider and individuals to collaborate with based on the activity being performed. Pertinent information will be delivered instantly to the right people, regardless of location, through a wide variety of supported devices, including smartphones and tablet computers.

The space-agey HD-PLM Vision video on the Siemens web site doesn't exactly explain the concept but is fun to watch.

New rapid design tools in NX 7 accelerate 2D profile creation and positioning, automatically inferring constraints and modeling intent and reducing model creation time by as much as 50%, according to the company.

For simulation, Siemens PLM reports a 75% reduction in the time required to create models for analysis compared with previous versions of the software, and a four- to five-times-faster analysis process that can be completed in-house. NX brings design and analysis into the same environment so analysts can get to the designer's geometry quickly, and easily make what-if changes.

Teamcenter. To say that Teamcenter is full-featured would be an understatement. Details about the features of the Microsoft SharePoint–compatible PLM solution — many of which are coming in the next version this fall — filled slide after slide. Siemens PLM aims to leverage SharePoint for the benefit of Teamcenter rather than compete with the popular platform. In the area of engineering process management, Teamcenter includes improvements to product BOM management; compliance management; content and document management; formula, package, and brand management; and supplier relationship management, among others. Enterprise Knowledge Foundation facilitates change and workflow management as well as authorized data access control.

The Velocity Series presentation for the media and analysts zeroed in on Solid Edge, specifically its Synchronous Technology, which combines "the best features of history-based modelers and history-free modelers," according to Dan Staples, director of Solid Edge product development. The latest version accelerates 3D model creation by eliminating design preplanning, allows users to create 3D models directly from 2D drawings using few or no commands, and facilitates faster design iterations by allowing new or redefined constraints on the fly. Engineering change orders can be completed in minutes, Staples explained, thanks to independent part editing. Supplier (outsourced) data can be modified quickly in-house because native commands work equally effectively on imported data, and users can create and use feature libraries from any imported model.

John Devitry, CAD Administrator at Utah State University's Space Dynamics Laboratory, as well as a USU adjunct professor, could easily be described as a Solid Edge evangelist. He gave a rousing presentation to the press, describing how Synchronous Technology in Solid Edge makes it so easy to teach 3D CAD to college students. He cited how a quiz he gave at Week 7 of a previous 3D CAD course is now given at Week 3, and how another quiz — a simple face variation — required about 20 minutes of student work using a different CAD solution but could be completed in just a few minutes using Solid Edge. His students who are new to CAD and not prejudiced by traditional approaches to modeling are forcing him to rethink rethink simple concepts that had become so ingrained over the past 20 years, Devitry said. Students working as interns are upsetting the status quo, Devitry added, when they suggest using Solid Edge to solve a redesign dilemma in minutes that experienced designers have quoted as requiring four to six hours to redesign. 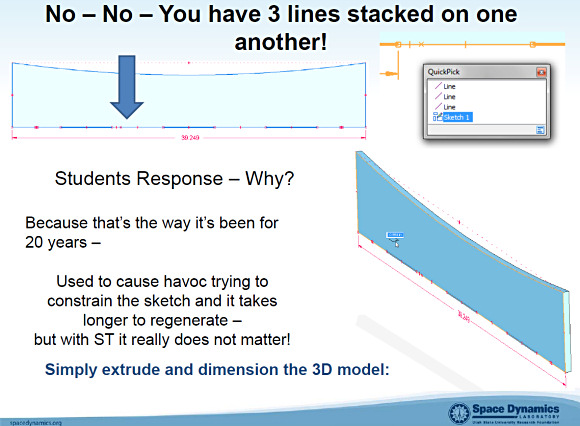 PLM: an Option?
As products and product development become more complex than ever, product lifecycle management — in whatever form seems to make the most sense for a given company — is becoming increasingly critical to the success of today's manufacturing companies. As Bob Trecapelli of Ford Motor Company said during the opening day's keynote session at PLM Connection 2010, "Success today is about process optimization — driving quality up and costs down." In the same session, David Spade of IBM, a Siemens PLM partner, noted, "The successful companies will be those that can best manage and respond to the complexity [of product development]. PLM is key."

The next PLM Connection is scheduled for May 2–5, 2011, and is headed for drier ground: the Rio Hotel & Casino, Las Vegas.