Rapid iteration and testing are key to creating a wearable human flight system that defies gravity in spectacular fashion.


Marvel fans may think of Captain America when they hear the name Rogers, but at 3DEXPERIENCE World 2020, presenter Sam Rogers was likened to a different member of the Avengers. This Rogers, introduced as “an actual Iron Man,” is the additive design lead at Gravity Industries — and a jet suit pilot. It’s not a bad comparison: Although he doesn’t dress in glistening red and gold, Rogers does get to fly through the air with the help of arm-mounted jet turbines.

Gravity Industries was founded in 2017 by Richard Browning, who “had a hunch that by augmenting the human body with sufficient propulsion, it would enable a human to fly with the most minimal equipment possible,” Rogers said. The first step in testing that hunch, he explained, was “attaching a turbine to your body with the simply available aluminum extrusion from the DIY store and testing what it feels like to disprove the first assumption that you have by putting a turbine on your arm” — namely, that it would be uncontrollable (and that it just might rip your arm off).

Fortunately, limb loss did not result. “In reality, it's just a soft spongy push, pushing up on your arm — it's quite manageable, and also you can move it around quite easily, even though this thing is spinning at about 2,000 [revolutions] a second internally,” Rogers explained.

The next step was to add propulsion on the second arm, followed by two engines on each arm, bringing the team “even closer to moon gravity and long-duration hops.” Advancing to three engines per arm, however, “proved a bit of a dead end,” Rogers said; “by having that much mass on the end of your arms, it is harder to control because you've got to accelerate all that mass as you move your arms around.” By switching to two engines on each arm and each leg, Gravity Industries achieved a six-second hover flight that “proved to us that this was something that was possible,” Rogers said.

About a year ago, the team started experimenting with 3D printing — both polymer and metal — and developed the configuration that’s in use today: one large turbo jet engine on the wearer’s back, combined with two on each arm. “That has moved the center of thrust high above your center of gravity, so you have a curtain of three thrust vectors around your body: one on each arm, each representing a third of the thrust, and another third on your back.” 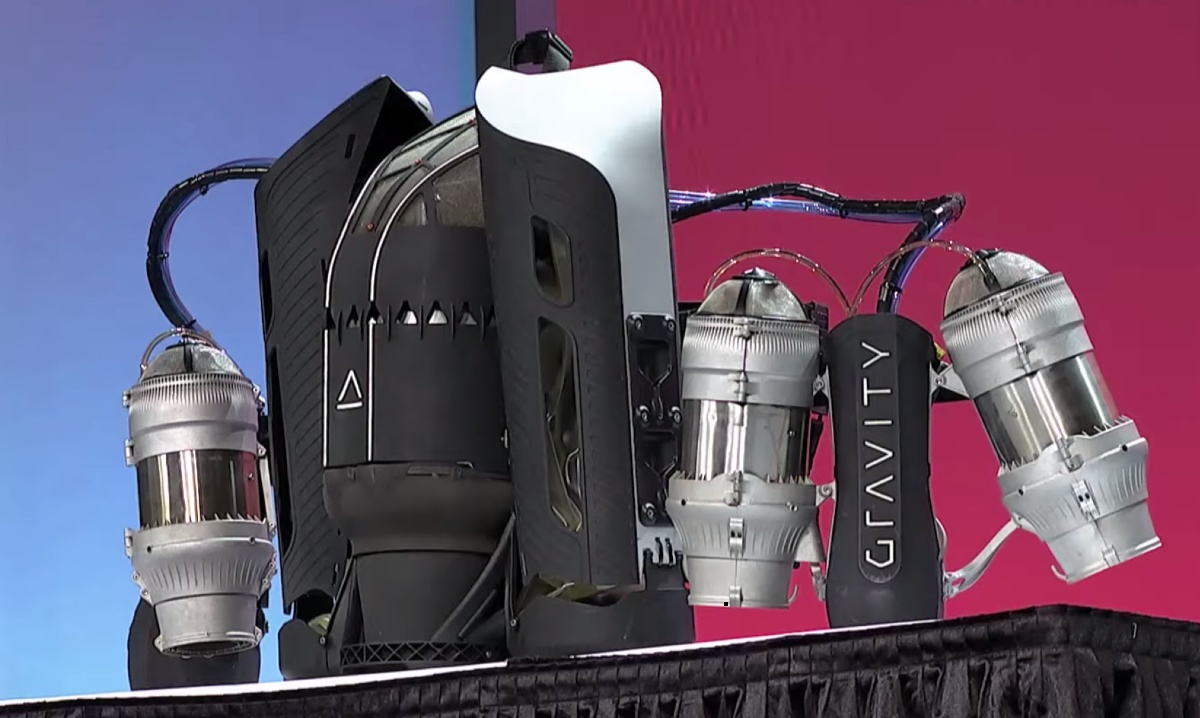 The Gravity Industries wearable flight system comprises aluminum and polymer arm mounts that hold two turbines each, and a fifth turbine mounted in a nylon backpack with steel base support. All these components are created with 3D printing.

“The way we got to that final configuration ... [was] through rapid iteration and trying something as quickly as possible … using commonly available materials.” (In this case, that includes things like attaching the aluminum tubes to the human body with zip ties.) “So rather than waiting for the perfect design to go and test an idea, you go to the DIY store, pick up the bits you need, and test the most rudimentary and crude version that you can, right now. You take your learning that you get from that test, and then immediately implement it in the next version. We don’t worry about it looking crude at first, we just test it ... it's learning from safe failure.” (According to Rogers, as long as a test doesn't cause financial devastation, or physical harm beyond a few bumps and scrapes, it falls into the safe category.)

At first, the team tried to minimize the number of parts to simplify assembly, Rogers related, but that proved too costly to produce. “Because we transferred all those parts into one design it turned out very expensive to [3D print], because you've got thousands of layers in each part — it means it takes a very long time to build, which means it's more expensive,” he explained. 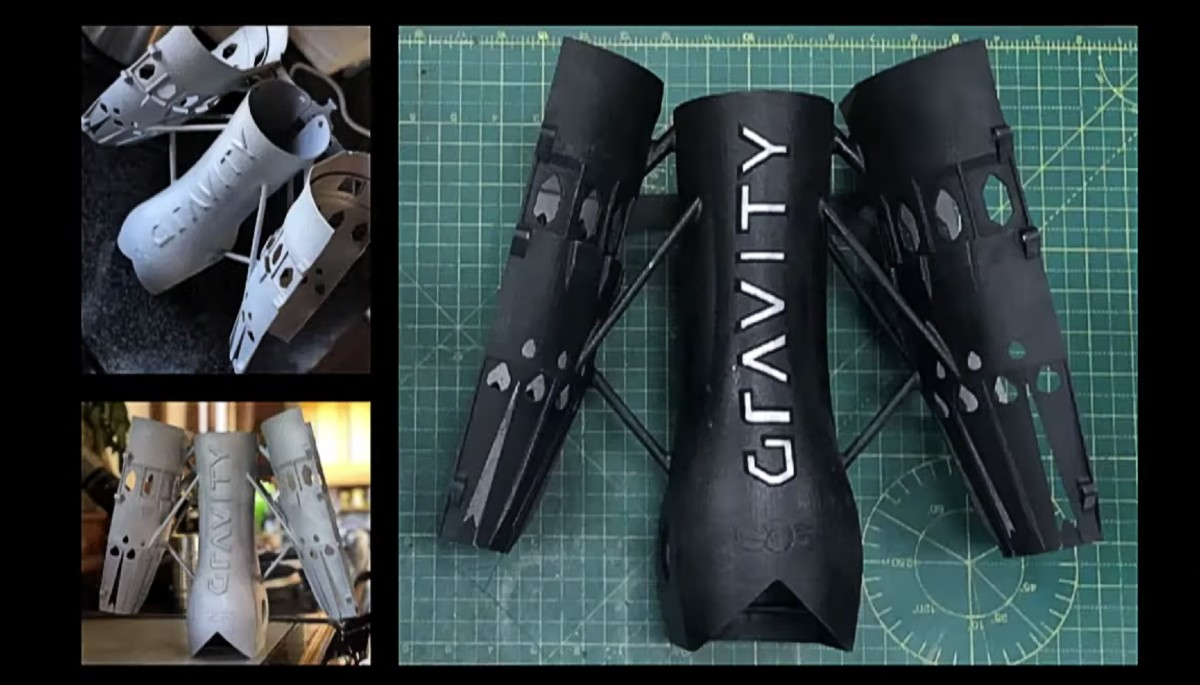 This early version of an arm mount for the turbines proved costly to create with metal 3D printing, due to its large size.

“So what we learned from that design and had a hunch that we could change the geometry of the arm engines such that they would help to lift themselves out, because they weigh now about 5 kilos each you've got those on the end of your arm, you want it to be easy to use as you fly with it rather than having to have shoulder strength to be able to fly it. So these arm geometry adjustments meant that the arm mounts lift themselves out as you throttle up, which made it much easier to control the suit. We embedded those into the next design, which was broken down into more pieces … we could combine all of those parts into one 3D printing build rather than multiple very large expensive ones.”

Today’s design “is broken down into many, many smaller parts [that are] half the height of those previous ones, and the lower the height, generally, of a metal 3D printing build, the cheaper it is to build.”

The arm mounts are now printed in smaller pieces, then assembled with the main arm tubes.

In the most recent of these three iterations (right), the arm tubes are no longer included in the aluminum print. Gravity Industries was able to reduce the amount of heat conducted to the arm mount by increasing cooling around the turbine nozzles; as a result, the arm tubes can now be printed from polymer instead of metal.


Cost and functionality aren’t the only considerations in a project like this one, however. “Designing things for a jet suit is kind of like something out of a film, so we want to make it look as filmic and cinematic as possible,” Rogers acknowledged. “So having learned from all this design for 3D printing, I founded AX, which helps people to design for metal 3D printing because it's a very different design mentality than that for traditional manufacture, because you really want a shell of a part, you want something very thin, you don't want a lot of internal stress — and you can make stuff look really cool.”