Having spent many years designing iconic and world-changing technology alongside Jony Ive at Apple, Christopher Stringer’s newest venture is exactly what you might expect it to be — trailblazing. Stringer co-founded a new company, Syng, that just rolled out its next-generation speaker system, Cell Alpha. The device doesn’t look — or sound — like any other conventional speaker. Advanced 3D printing technology from HP contributed to both of those qualities.

Filling a Room with Sound

The Cell Alpha is a triphonic speaker system built for what Syng calls “smart sound.” Sensors in the speaker automatically calibrate sound production by noting its placement within a room in relation to the surfaces around it. Listeners can use a user-friendly app to customize the system further so that it projects sound in a transformative way. For example, if you’re listening to music, it sounds as if the band or orchestra is in the room with you.

If you add more Cell Alpha devices to a room, they coordinate with one another. Unlike with stereo equipment, it doesn’t matter where you place the speakers or how many you have. The result is an immersive sound experience, made possible by a structure Syng calls the Triphone. 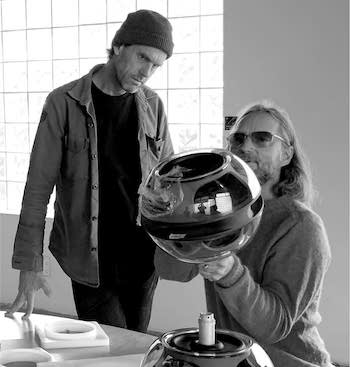 Christopher Stringer, Co-Founder, CEO and Chief Design Officer (above, right) of Syng says, “Sound is a critical, often overlooked element in our lives. We created Syng so anyone can experience the power of audio.” Image source: Syng.

The Triphone element is a three-horned sound projector that resembles a halo as it encircles the middle of the spheroidal speaker. It holds six speakers and includes 10 pressure seals. The unique driver assembly is used to project audio with pinpoint accuracy around a room. The Triphone functions as both the sound delivery system and the bulk of the physical structure of a Cell Alpha device. Producing this complex part to high specifications without requiring an astronomical price tag is the key to the product’s success.

Syng’s design team knew from the beginning that producing a part with seams would reduce the quality of the sound it delivered. That eliminated injection-molded processes from contention—and inspired the team to connect with HP and pursue 3D printing instead.

The team’s early commitment to 3D printing had additional benefits. Because HP’s 3D printing capabilities span from prototyping to production, the design team was able to make iterations and experiment with shapes and materials to more easily design the final product. The team studied everything from how the product’s performance was impacted when dropped or tipped over, to the way the part resonated across the speaker’s full range of frequencies.

Using 3D printing from the onset streamlined the design process, giving the team the ability to move seamlessly from prototype to production. This created efficiencies and design flexibility that injection-molding techniques can’t offer because they use different resins that add a step prior to production. Knowing that anything they got right would translate directly into production models allowed them to focus more closely on creating the best possible structure to realize their vision.

That capability also allowed the design team to embed most of the unit’s complexity in the 3D-printed Triphone, making the other parts of the system as simple to source and produce as possible. 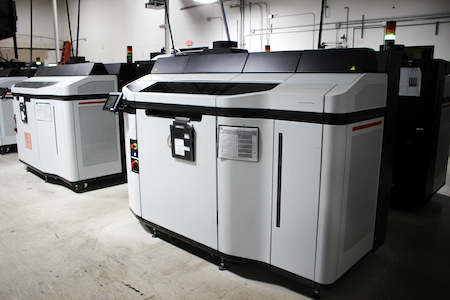 HP’s 3D printing technology enabled Syng to use PA 12 material to produce the Triphone’s signature look and high-quality sound production. This material gives manufacturers such as Syng more flexibility to use dying powders during printing, ensuring they get exactly the look they want. At the same time, HP’s technology minimizes waste compared to other conventional 3D technologies such as selective laser sintering, making it possible to recycle up to 80% of the surplus powder left over after manufacturing. This capability optimizes cost while still delivering a high-quality, complex part. 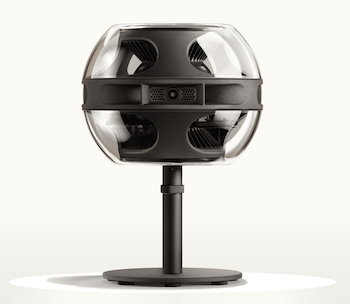 Manufacturing the Cell Alpha with 3D printed parts from the HP Multi Jet Fusion printer allowed the parts to be made in a single piece, not only making them stronger, but also precise to specifications and economical. Image source: Syng.

The Future of Audio

Syng purposefully designed Cell Alpha to be a long-lasting piece of equipment. Instead of planned obsolescence, the company intends to build on its success with Cell Alpha, moving on to other high-end, durable products.

Ultimately, 3D printing was the only method of manufacturing that matched Syng’s vision for the future and the advanced capabilities enabled by HP Multi Jet Fusion allowed production of the Triphone in a single piece while maintaining the structural integrity of the complex paths the sound travels through the component. The collaboration between Syng, HP, and Forecast 3D leveraged the power of 3D printing to push the boundaries of audio technology and has helped bring sound into the future. Without the ability to produce the part consistently and economically, Cell Alpha may never have been able to move from the drawing board to the living room.

About the Author: Jon Wayne