The launch of the full-color, office-oriented J55 3D printer comes at a moment of exceptional supply chain disruption, which increases the appeal of in-house part and prototype creation.


Stratasys launched its office-friendly, multicolor-capable J55 3D printer yesterday, and both the “virtual launch event” — which featured presentations delivered in home offices — and the product messaging were heavily influenced by the current coronavirus crisis.

“3D printing is more relevant today than it ever has been before,” said event host Liz Miklya, senior vice-president of PR firm Weber Shandwick. “We are in a time when businesses have to rely on their own resources, protect themselves from disruptions in the supply chain, innovate and create quicker — and with less contact — than ever before.”

The answer to these challenges, according to Stratasys, is to bypass traditional product development workflows altogether. “We are living in a world of continuous acceleration … and in this context, 3D printing is the perfect solution,” said Stratasys CEO Yoav Zeif. “Already today, 3D printing is essential for every step in product creation. If I look at the future, the road is paved for success, because 3D printing, given the need that we see now on a daily basis, will change the status quo — and I mean the status quo of how we are creating products,” he explained. “You are not in the hand of, or in the pocket of, any supply chain. You can do whatever you want, you can design whatever you want now, with the best quality.”

Zeif used the example of 3D printing addressing medical supply shortages: “You have the ability to act fast. If you need a splitter for ventilating machine, you can have it now — you don’t need to design with the prototype [and then] the mold and then to make it, which can take months — you can do it tomorrow. … [You can] practically build any product, any time, anywhere.”

And these benefits are not limited to the current crisis, Miklya pointed out. “Imagine: Not having to get parts and prototypes shipped from halfway around the world,” she said. “Not having to worry about elements outside of your control disrupting your work. It’s not just pandemics, but also weather, import rules, misunderstandings, and lengthy shipping times.”

Tim Greene, a research director for 3D printing at global research firm IDC, said in a Stratasys release that it’s clear that the product design process needs to change for today’s world, where disruption is always around the corner. “We know that the risk and time involved with traditional prototyping simply doesn’t work anymore, yet there’s no room for compromise on design,” he said. “Designers can and should do a lot more prototyping in-house, from initial concept modeling to highly realistic final prototypes.”

The J55 was designed as a complement to the Stratasys J8 series for enterprise shops. It provides the same resolution and detail as J8-series printers, and it costs “about a third” of what Stratasys’s enterprise-class PolyJet printers do, the company says.

Creating models in-house for review in hours, rather than days or weeks, can have significant benefits, according to Gina Scala, director of marketing for design and education at Stratasys: She claimed a 79% cost savings compared to outsourcing, and a 97% time savings.

“Unlike other 3D printers, the print head stays static, while the build tray spins, allowing for shorter, radial 3D printing paths for faster prints, and prints at a higher quality,” said Scala. This setup is also designed to maximize reliability and simplify maintenance, according to the company.

In addition to design shapes, the J55 also is capable of representing the material, color, and finish of final products, including photorealistic graphics. It can print as many as five materials, plus support material, simultaneously; that enables the creation of nearly a half-million colors, including Pantone-validated colors. Opacity and transparency can be combined in the same print, thanks to the VeroClear material (and VeroUltraClear, coming later in 2020). 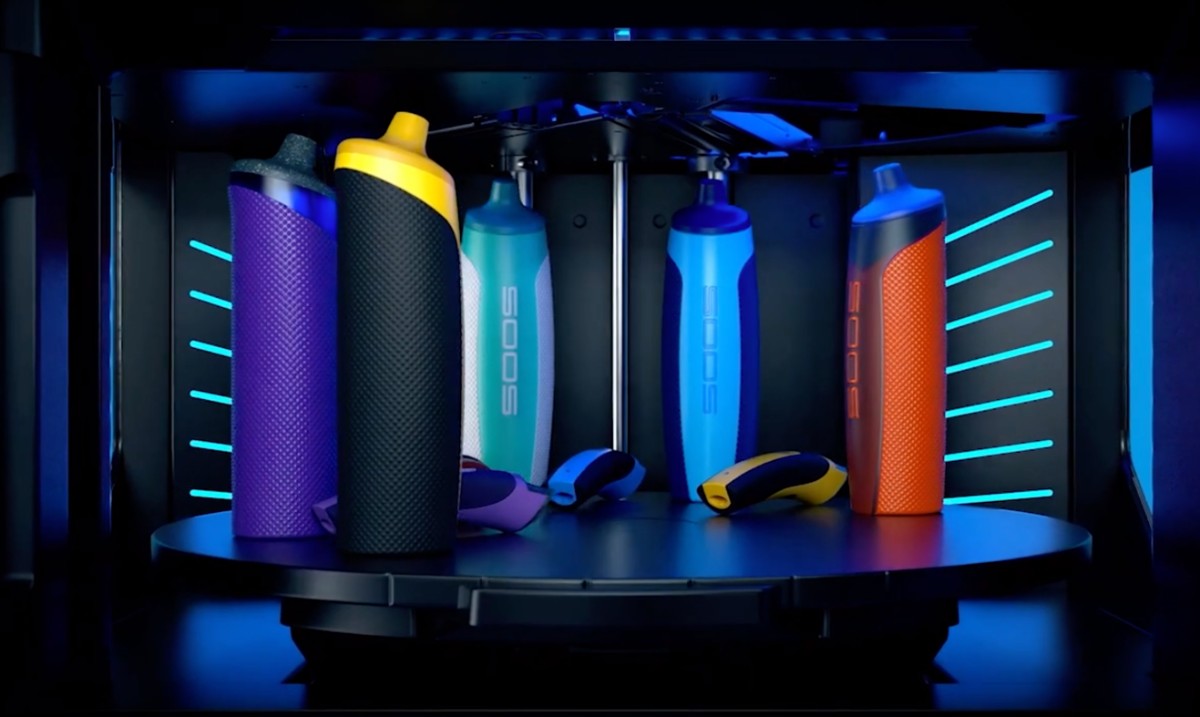 The J55 can print in nearly 500,000 colors — a few of which are displayed in these prototypes arrayed on the build plate, which rotates under a stationary print head. Image source: Stratasys.

“The J55 was really designed for designers — product designers, industrial designers, and even design engineers that have quality on their mind,” said Scala. “With the J55, we’ve brought most of the capabilities of our larger PolyJet platform to a smaller, easier-to-use, and much more affordable system — a system that can sit right by a designer, and easily be run by that designer.” The maximum build volume is 1,340 cubic inches (22 liters), and the printer uses 4.6 sq ft of floor space. 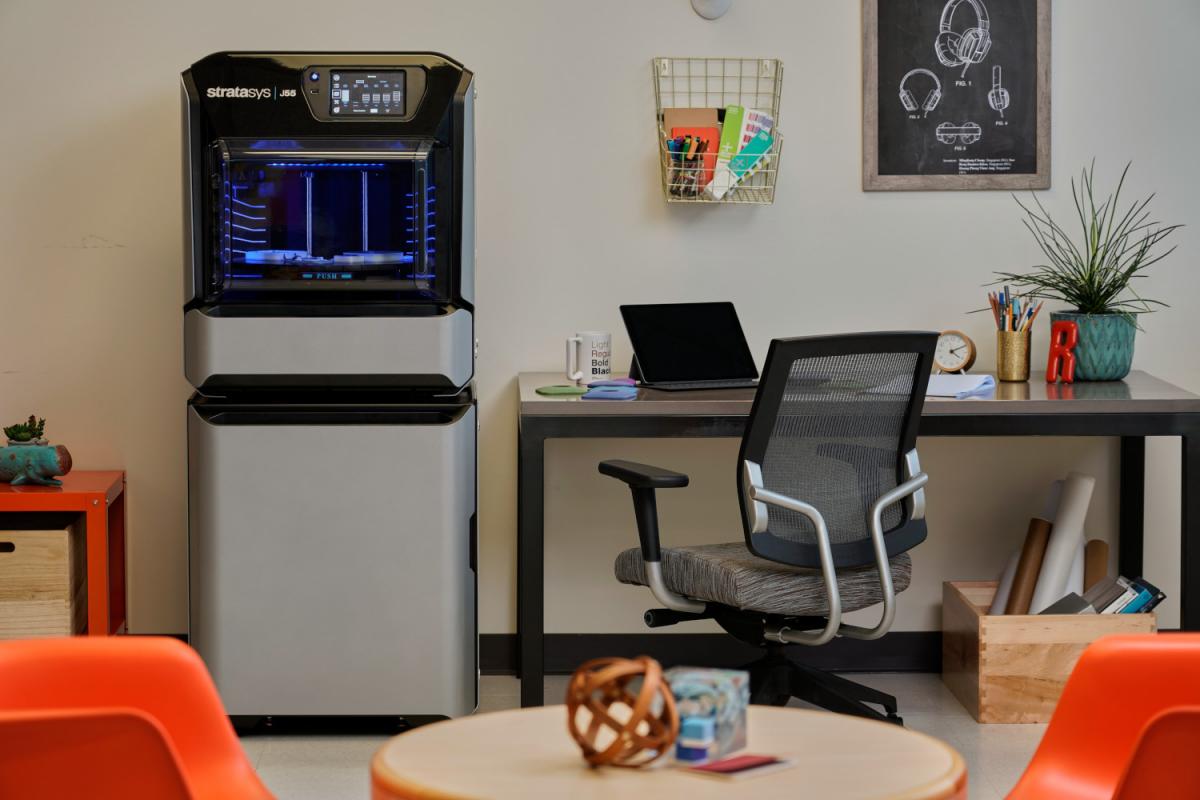 In addition to a footprint that can fit next to a desk, “office friendly” means that the J55 emits no odor, thanks to Stratasys ProAero filtration technology, and makes “nearly no sound” (about as much as a home refrigerator, reportedly). In addition, the UV–LED illumination system is safe for the eyes of observers.

Lastly, remote monitoring makes it possible to manage print jobs from other locations — such as home offices. The J55 is expected to ship in July 2020; preorders are being accepted now.