Most Manufacturing and AEC Companies Plan to Use Real-Time 3D within Two Years, Unity Survey Suggests

Currently, only 19% of the surveyed organizations use emerging technologies such as virtual and augmented reality, but the maker of the Unity real-time 3D platform expects that number to increase rapidly.


Unity Technologies has revealed the findings of a study it commissioned titled, “Digital Experiences in the Physical World: Are AEC and Manufacturing Companies Ready for Real-time 3D?” But what is real-time 3D, exactly? “It’s a computer graphics technology that actually comes from the world of gaming,” explained Julien Faure, general manager of verticals for Unity, during a webinar about the study. “In real time, the 3D images are rendered at a very high speed — faster, actually, than the human eye can see — up to 120 images, 120 frames per second.” (For the study, real-time 3D is defined as interactive, realistic digital representations of real-world assets like manufactured products and buildings.)

“While a few years ago, real-time 3D was primarily used in gaming — in fact, it was forged in gaming, and gaming has pushed the limits of the technology — today we are seeing it adopted across every industry, from aerospace to automotive, architecture for buildings, heavy infrastructure, roads, highways, healthcare, industrial equipment, retail, transportation — you name it, across the board, we see a lot of companies adopting it,” Faure observed.

The online study, conducted in October 2019 by Forrester Consulting, gathered input from 358 decision makers responsible for engineering, innovation, design, R&D, and operations. All respondents had responsibility for creating 3D content or overseeing its creation, and/or “knowledge of the 3D technology landscape.” The survey takers hailed from around the globe, including Europe, the Middle East, and Africa (EMEA, 44%); North America (NA, 42%); and the Asia-Pacific region (APAC, 14%).

Forrester found that 55% of the manufacturing and AEC companies surveyed plan to be using RT3D technologies within two years — more than doubling the current percentage of users (19%). Also, the study results can be interpreted to mean that RT3D provides a convincing return on investment, as 94% of companies that already use RT3D plan to expand their use of it. 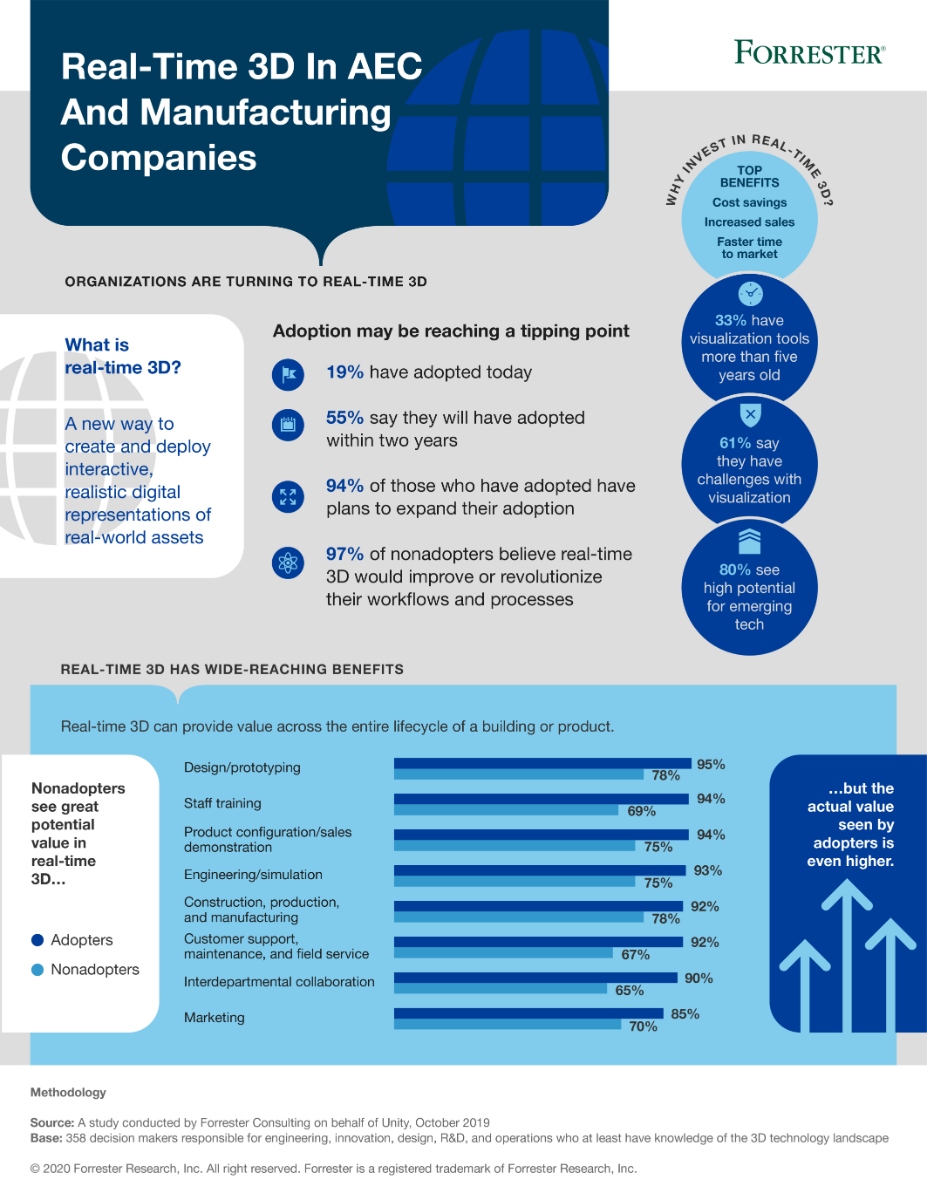 According to Unity Technologies, “the adoption of RT3D appears to be rapidly approaching a tipping point, as only 19% of all organizations surveyed currently use the technology to create virtual experiences for virtual reality, augmented reality, and other platforms.” If this predicted steep adoption curve pans out, it’s good news for Unity Technologies, which is the creator of the Unity real-time 3D (RT3D) development platform. Unity CMO Clive Downie reported in a press release that his company’s platform has “seen tremendous growth and impact with industrial companies” over the past year-and-a-half. “Customers are finding RT3D technology to be essential in saving time and money across the product and building life cycles, from prototyping and conception through production or construction to sales and marketing,” Downie said.

It’s natural, when presented with any kind of “tipping point,” to wonder: Why now? Unity’s platform, and related 3D technologies, are not new, so what’s getting companies off the fence and turning them into users? “People are starting to realize more and more that [an RT3D solution] allows them to do a lot of things that AEC software doesn’t allow them to do,” Faccenda posited. “It [enables them to] get the most out of the software they’re using.”

Since this survey was conducted before the world knew what havoc the COVID-19 pandemic would bring, it seems likely that the rising wave of implementations will be smaller than indicated by the survey results; companies are often hesitant to spend money on implementing new technologies during a time of uncertain revenues. But the reality is less clear-cut; the current climate includes beneficial aspects for certain sectors. “It’s a mix of both [good and bad],” according to Faccenda. Some shop architects now working from home are “collaborating even better than they were before,” he said.