NVIDIA’s RTX platform, which comprises software tools and hardware acceleration of ray tracing and artificial intelligence (AI), introduced interactivity to ray tracing — it enables users to see the lighting effects immediately as they change illumination sources, materials, and other components of digital scenes. “Ray tracing has been known and understood for a long time, it just didn’t work interactively [before RTX],” said Greg Estes, vice-president of corporate marketing and developer programs at NVIDIA, during a media briefing.

There are all kinds of reasons to accurately reflect materials and light when making design decisions, Estes noted. For example, “if you’re building a building, you want to know how light is going to reflect other buildings off it [and] how light streaming through a window can affect the mood of a building,” he explained. Or in aircraft design, “if the light was streaming through windows and hitting the backseat monitors, causing glare … you’d want to adjust for that.”

Ever since NVIDIA launched the technology in 2018, the company has been all-systems-go in extending RTX’s reach throughout product and architectural design, video games, and other graphics-intensive fields. “In the one year since SIGGRAPH last year, we’re really proud and happy that RTX is everywhere,” said Estes.

Today, at the annual SIGGRAPH computer graphics conference, NVIDIA announced some fruits of those efforts. This week at SIGGRAPH, seven applications are introducing support for RTX technology, bringing the total to more than 40. RTX-supporting applications include Dassault Systèmes CATIA/Stellar and SOLIDWORKS Visualize, Chaos Group V-Ray, Autodesk Arnold, and Siemens NX RT Studio, as well as the Unity and Unreal 3D content engines. The latest additions to the group include Foundry MODO and Luxion KeyShot, both of which only had CPU acceleration until now, Estes said. “Every major 3D design application in the world has committed to supporting RTX by year’s end,” NVIDIA stated.

On the hardware side, NVIDIA announced that BOXX, Dell, HP, and Lenovo are launching a total of ten new RTX Studio laptop computer and mobile workstation designs, joining the 17 RTX-powered models that are currently available. “All of the majors are with us,” Estes commented. 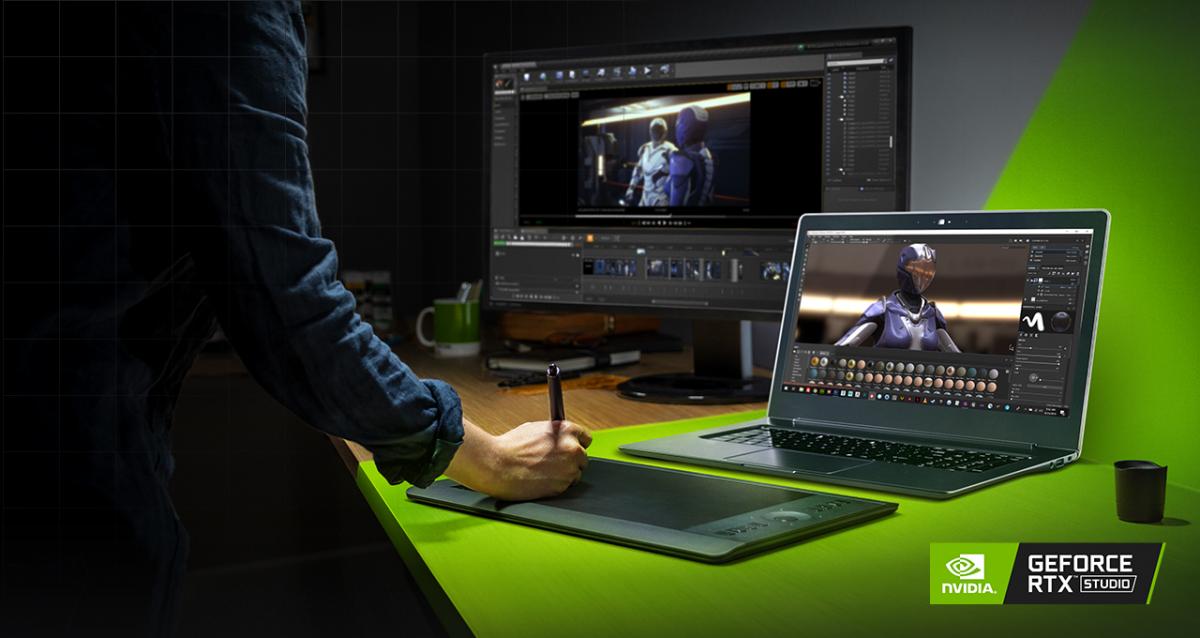 The RTX Studio models are aimed at all users who could benefit from applying ray tracing and AI in their workflows — a category that encompasses a range of digital content professionals, from video editors to 3D rendering creators. “[The RTX Studio models] open up this really large market,” Estes said, estimating that 40 million people are using applications that support RTX.

Jason Paul, general manager of GeForce software and technology at NVIDIA, said in a company release that “[RTX Studio laptops and mobile workstations] put real-time ray tracing, advanced AI, and video editing in ultra-high resolution within easy reach of creators, delivering capabilities in a mobile form factor that once required an entire studio.”

Laptop models in the Studio line are available with NVIDIA’s Quadro and GeForce GPUs. “In general the Quadros are going to have larger frame buffers than the GeForce ones, so they tend to be a little bit higher-end in terms of capability,” Estes explained. He said that frame rate and frame buffers are especially important when workflows comprise multiple applications, observing, “It’s very rare for an artist to run just one application.” Mobile workstations in the line are based on Quadro RTX GPUs and provide ISV certifications.

Estes celebrated the financial accessibility of the lower end of the Studio line. “We’re considerably opening up the market [to smaller buyers] … it’s just awesome for them to get something in this price range,” he enthused, estimating that the Studio computers will start at around $1,700.

NVIDIA also announced the availability of a new NVIDIA Studio Driver, which provides optimizations for applications such as OTOY Octane Render, Autodesk Arnold, and Maxon Cinema 4D. “We’ve optimized for performance for these applications, so they’re designed and they’re tested and you know they work,” said Estes.

The updated Studio Driver adds what NVIDIA says is an oft-requested feature: support for 30-bit color in OpenGL apps such as Adobe Photoshop and Premiere for all GPUs. This feature reportedly prevents color banding in HDR photos and videos. “We’re providing better color depth and better accuracy with these drivers as well,” said Estes. “It’s not just about the reliability and the testing, it’s also about performance and features.”