For design teams and other groups, a desktop holographic display is more practical than head-mounted virtual reality solutions, according to the Looking Glass Factory.


As more enterprises adopt augmented and virtual reality (AR/VR) solutions, head-mounted displays (HMDs) are becoming a familiar sight in some work environments. But HMDs (or headsets or VR goggles, as they’re often called), have downsides beyond making the wearer look a bit silly.

Depending on the design, they may be heavy or uncomfortable — and depending on the cleaning protocol, they may bear traces of the previous wearer’s sweat. They can interfere with, or entirely preclude, prescription glasses. Tethered headsets sometimes make the wearer feel like a dog on a short leash; the untethered type allows the incautious to walk into walls. The complete visual exclusion of the real world can contribute to headaches, nausea, and even claustrophobia. And for better or worse, they are individual portals into an AR/VR experience; simultaneous use requires an additional HMD for each person involved.

Looking Glass Factory was founded with the goal of giving users 3D experiences “without the indignity of VR or AR headgear strapped to their faces,” in the words of CEO Shawn Frayne. The company claimed the title of “creators of the world’s first desktop holographic display” last year, with the launch of the Looking Glass display, which connects to an external computer and simultaneously generates 45 views of an object or scene at 60 frames per second, yielding a fully 3D viewing experience with any headgear. 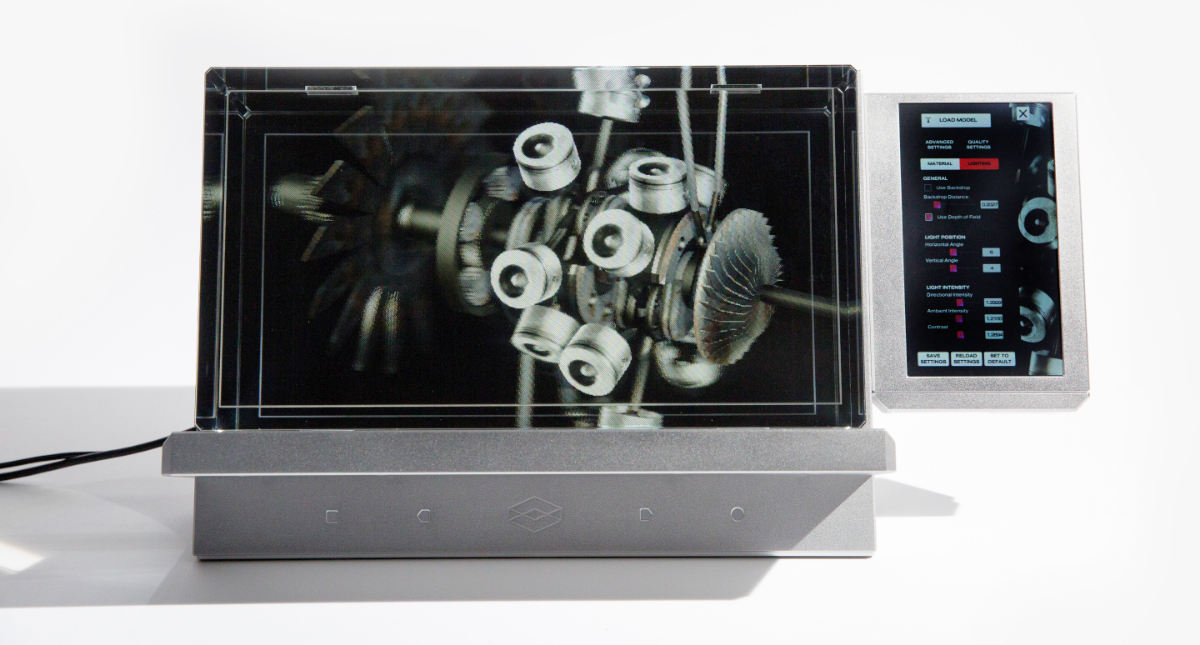 The small touchscreen at the side folds back behind the holographic display when not in use. Image source: Looking Glass Factory.

Users can display and interact with their own content holographically with included apps, such as the 3D model and animation viewer app, or use the Looking Glass Pro software — including the HoloPlay Unity software development kit (SDK), HoloPlay Plugin for Unreal, and the three.js Looking Glass library — to generate their own holographic applications for 3D design and simulation, architecture, marketing, and more. A Leap Motion controller enables users to interact spatially with the Looking Glass.

Although 3D display technologies have appeared in the professional market before, Looking Glass is not comparable, according to Shawn Frayne, Looking Glass CEO. “The Looking Glass is unique, and I don't think there's anything quite like it out there,” Frayne told Cadalyst. “It's a patented system that blends lightfield and volumetric display technologies in a way that no one had explored before. Most of the ‘holographic’ technologies that are floating around the internet are actually just 2D reflections — they use a trick called ‘Pepper's Ghost’ that's over a hundred years old, and it's really just a 2D reflection. So, most of the systems that claim to be holographic aren't actually three-dimensional at all.

“The few that actually do give some 3D sense have almost always required users to put on some sort of glasses or tracked a single person's face, so they haven't been able to work easily with groups of people and they've never quite worked 100% of the time in real-world environments. The Looking Glass is different, in that it produces a truly three-dimensional image made up of 45 lightfield elements (or views) shooting out into the real world every 1/60th of a second, and it is as stable as a real object — by which I mean, it works 100% of the time, regardless of whether it's sitting on a designer's desk or running in a trade show. What this means is that groups of people can see virtual 3D parts and holographic scenes represented in genuine super-stereoscopic 3D, all without needing to put on any tracking glasses or VR or AR headsets.”

Looking Glass is also set apart, Frayne noted, by its efforts to make systems that are “affordable enough for many 3D creators … while also serving the needs of enterprise.”

As for the benefits of the Looking Glass for CAD users in particular, Frayne pointed to creating and evaluating designs with greater accuracy, previewing 3D models at scale, and reducing repeated viewing actions. “In cases where you have a complex system — let's say you're evaluating a complex set of wiring or piping around a 3D model of a part — there is a lot of innate ambiguity in where different elements of that assembly might be wrapping in front of and behind each other in virtual 3D space, leading to errors that can be devastating. That ambiguity goes away when those models and assemblies are represented in a dynamic holographic display. Even more straightforward, a lot of times a 3D designer just wants to get a scaled holographic preview of the part they designed before 3D printing it, to prevent a wasted print. 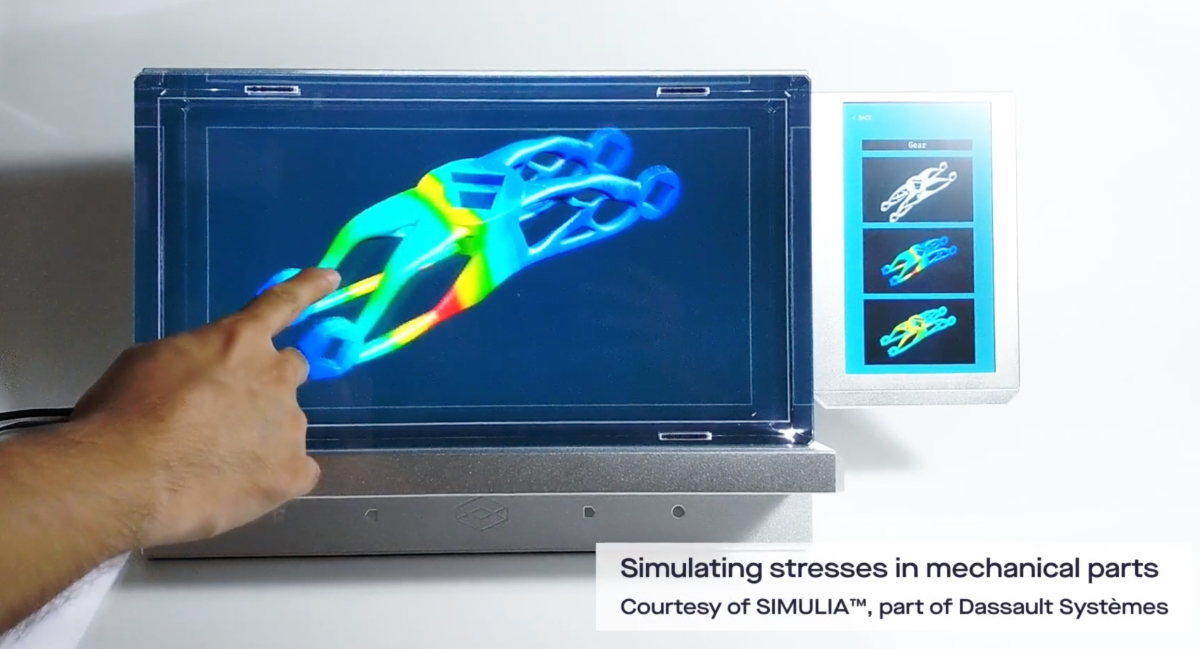 Simulating stresses in SIMULIA on the Looking Glass Pro. To see this simulation in motion, scroll down to view the video. Image source: Looking Glass Factory.

“It also becomes easier to place objects in 3D space when you have a quick reference of where those objects are located in real 3D space in a Looking Glass — whether it's lighting placement around a character you're sculpting in Maya or ZBrush or Blender, or annotations you're laying out in a 3D scene. Most CAD designers using only 2D displays for their work need to repeat the action of rotate–rotate–move when moving different elements around in their 3D scene. That action is repeated thousands and thousands of times for every model and assembly that's ever been made, and that wasted time will go away as Looking Glasses make their way onto the desks of more 3D designers and we deeply integrate with more CAD tools over the coming months.

“As a company with main offices in two cities of Brooklyn and Hong Kong, we're also constantly working towards a future in which both our teams will be able to conduct real-time product reviews inside Looking Glasses in each location. I hope that we'll be able to share this 3D collaborative workflow with other companies in the product design space soon.”

And what else does the future hold for Looking Glass? “While our current focus is on developers and enterprise, it won't be long before Looking Glasses will start to serve everyday folks as the holographic displays in millions of homes around the world,” Frayne predicted. He also has high hopes for the growing community of 3D creators who are building hundreds of applications for the Looking Glass: “I believe some of the work from this 3D creator community will surface the first killer apps for holographic display.”