Ads help support our ability to provide you all our articles and papers at no cost to you. Thank you for your consideration and support.
Input Devices

When you work on a computer all day, your input devices become very important to help you avoid repetitive stress injuries.


As discussed in "Best Input Devices 2019, Part 1: Keyboards for CAD," input peripheral devices are as important to CAD users as ample RAM and a good GPU (graphics card). Because of the possibility of repetitive stress injury, you could say that your keyboard, mouse, and other input device are even more important.

When you create models or drawings, the mouse becomes an extension of your hand, interacting with the drawing medium of the software. Inexpensive mice sold to consumers are OK, but we believe professionals should use professional tools. An input device for CAD should offer precision, fast response, comfort, and full control. In this article, we discuss the advantages of professional mice and related input devices that offer the best possible experience for CAD users.

All but one of the mice from 3Dconnexion are stationary devices. Most CAD users who own one of their products use the 3Dconnexion device in one hand and a typical mouse in the other hand. The only moving mouse they make first came to market in 2015, at the request of existing users who wanted a complimentary mouse to their existing "space mouse."

A mouse is always used by the same hand, and the movements are repetitive. When the use is intense, as in several hours a day every day, it can lead to a Repetitive Stress Injury commonly known as "mouse wrist." This is one reason why most devices in the 3Dconnexion line are stationary.

3Dconnexion has published research on its website from the well-known Fraunhofer Institute in Germany on the importance of better ergonomics. The study claims the use of a 3D mouse (stationary device) can make CAD workflow "considerably more efficient and healthier." The study showed that the typical user of a 3D mouse makes 28% fewer finger movements per house than someone using a standard mouse. As 3Dconnexion notes, "Strain from your hand musculature falls from a dangerous level of over 1,800 movements per hour to an acceptable level of 1,336 movements per hour."

There are several versions of the 3Dconnexion SpaceMouse. We will mention two here, SpaceMouse Enterprise and SpaceMouse Wireless. They represent the top and bottom of the line in price and features.

If you have never seen a SpaceMouse in person, at first look they seem a bit overwhelming. "That's a mouse?" is a common statement. The controller allows full 3D navigation thanks to a 6-degrees-of-freedom sensor. In addition to 12 programmable button keys (also found in other models), SpaceMouse Enterprise offers Intelligent Function Keys and a color LCD display that shows icons from the application in use. Keyboard modifiers offer duplication of commonly used keyboard functions for Control, Alt, Shift, Escape, Enter, Space, Delete, and Tab.

The 3Dconnexion SpaceMouse Enterprise offers a total of 31 programmable button combinations, and is compatible with a wide variety of CAD products. Image source: 3Dconnexion.

At the other end of the price/performance spectrum is the 3Dconnexion SpaceMouse Wireless, designed to bring as much 3D control as possible in a small device. Like its larger siblings, it does not roll, but gives the use the same six degrees of freedom to navigate. Each of the two programmable buttons can be used for up to eight commands when used in conjunction with controller movement.

This model could be the permanent desktop companion, or it could be used with a notebook computer for work away from the office. The wireless connection is 2.4GHz to distinguish it in the workplace from the more common Bluetooth.

There are many brands of professional-quality mice and trackballs. Trackballs are stationary devices controlled by finger, thumb, or palm movement, depending on the model, and are a good option for those who experience RSI symptoms from mouse use. The three top brand names are Anker, Logitech, and Microsoft. What separates these three brands from run-of-the-mill nameless mice are build quality, attention to ergonomics in design, and programmability.

Logitech claims trackballs reduce muscular strain by 20% compared with standard mice. The Logitech MX Ergo trackball ($99 suggested retail) has an adjustable hinge to tip the angle between 0 and 20 degrees for user comfort. A Precision Mode button shifts cursor speed and accuracy, and a separate scroll wheel offers horizontal scaling and doubles as a middle click button. It offers connectivity via both Bluetooth and USB Wireless. It also offers the ability to connect to two computers at the same time, switching back and forth as needed or use to copy/paste from one to the other using the included software. 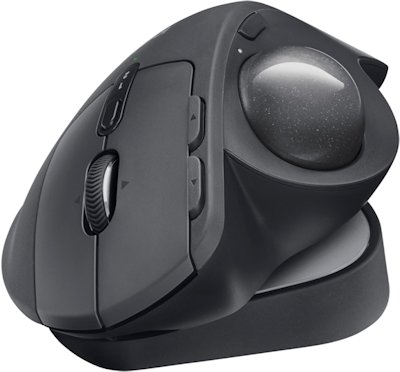 The Anker 2.4G Wireless Vertical Ergonomic Optical Mouse stands out in the budget category ($20) for its vertical styling which allows fingers to be on the opposite of the mouse from the thumb. It features a left and right button, a scroll wheel, and dedicated buttons on top for dots per inch (precision cursor control), and previous/next page.

The Microsoft Sculpt Ergonomic Mouse ($30) falls somewhere between a vertical mouse and a traditional model. It offers the typical two-button design with a four-way scroll wheel in the middle, plus adds five buttons designed to be used by the thumb. 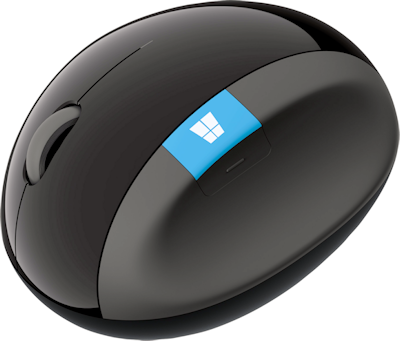