To determine the best approach for any particular augmented reality (AR) use case, enterprises should start by answering questions about their strategy, their content, and how they’ll deliver it.


Anyone still laboring under the misconception that augmented reality (AR) is only useful for entertainment applications like Pokémon GO would do well to listen to PTC CEO Jim Heppelmann expound on the subject. “AR is IoT for people,” he told the crowd at the 2019 Augmented World Expo USA. Whereas machines have become more effective components of the enterprise via their connections to remote information sources and each other, “the human side of this equation hasn’t benefited the same way. But I think AR is the answer to how we connect people to the Internet,” he said. “People don’t have an Ethernet port, but now they have an AR device that serves the same task of converting digital to analog and back again.”

Using the Microsoft HoloLens as an example, he likened an AR headset to a combined modem and edge device — but for humans. “You’re basically using a device that turns you into a cyborg — part organic, part cyber, and now bits and bytes streaming down from the cloud get converted to analog signals … that you see and hear with your analog senses, and meanwhile when you speak with your voice or move your hands around, the analog signals you’re creating get converted back to bits and bytes and sent up to the cloud.”

PTC’s customers are doing “everything” with AR, Heppelmann enthused, applying it in areas ranging from product development and manufacturing to sales and marketing to service and training. He used a broad range of examples, from marketing furniture to assembling components. Other examples included:

Capturing manufacturing expertise and training operators. “Every company has a problem with retiring workforce,” so transferring knowledge from the old hands on their way out is essential. If an expert employee uses AR to capture the correct way to perform a process, his knowledge can be used by a newbie to the job: “She’s basically being guided or coached through this process by the artifacts Joe left behind when he retired,” Heppelmann said. “We can rethink the training model from ‘in advance and just in case’ to ‘in the moment, just in time, in just the [right] place.”

Servicing devices collaboratively. “If we could make service simple enough, we could actually have customers do much of it — or at least do the first pass, because if a customer can fix that, that machine’s only down for 10 or 15 minutes, versus a day-and-a-half before we could get a technician there to take a look at it.” Heppelmann pointed out that this kind of customer experience offers companies “a chance to differentiate their equipment by the digital experience they’re going to wrap around it, and that’s a big bold idea.”

Supporting field operators. During a video call between a remote worker and home office personnel, both could draw on screen to point out problem areas or the correct button on a machine. “Here we’re authoring too, but this is the simplest of all because nothing was done in advance, anybody can talk to anybody in the moment, ad hoc — collaborate and go solve a problem using the power of AR.”

Although he believes there’s “an immense amount of value” that can be created for enterprises through AR, Heppelmann acknowledged that it’s a complicated endeavor. “You need a lot of technology to do enterprise AR — it’s not really that simple, because each use case has so many tough questions,” he said.

And to define and organize those questions, he presented a framework to discuss the choices involved in implementing AR for various enterprise use cases. 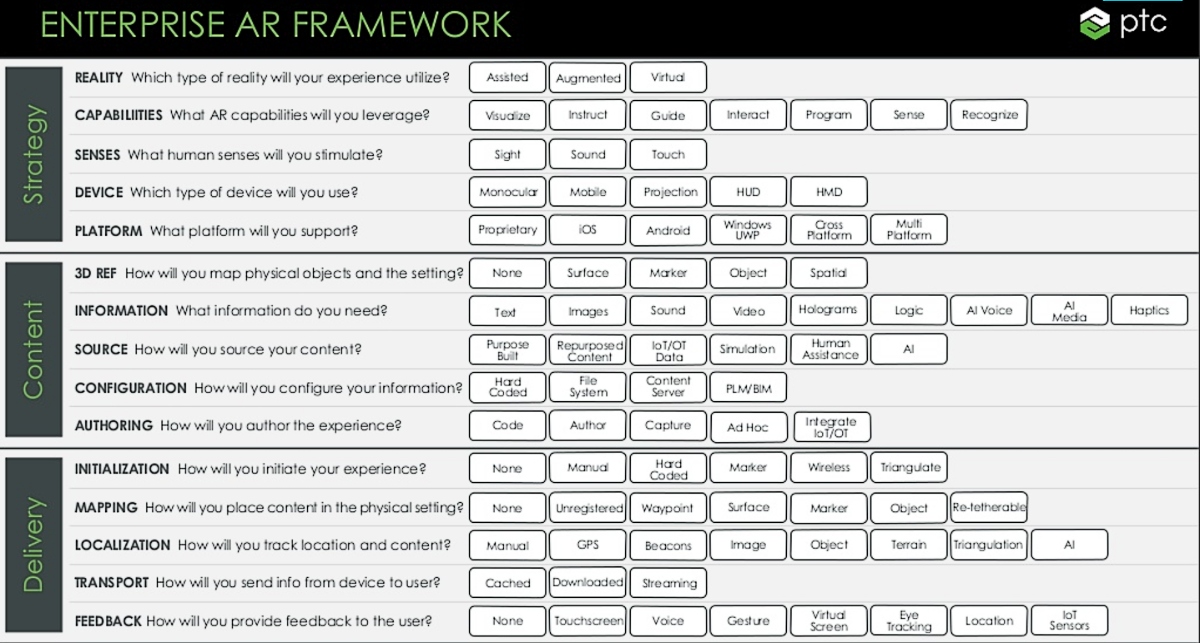 Start with the Right Questions

Heppelmann discussed his framework one category at a time.

As Heppelmann’s framework makes clear, there is a long list of questions to address, and many technology options to sort out. Ultimately, he stressed, enterprises will be poorly served by a cobbled-together AR strategy that incorporates incompatible parts. Instead, they need an enterprise-specific platform that provides a consistent way to plan and implement AR initiatives, such as PTC’s Vuforia suite, he said.