The new AR app is designed to accelerate product development by helping creators and customers evaluate designs in real-world contexts.


Many tasks and workflows in the CAD world require the purchase of specialized hardware, such as powerful workstation computers and GPUs. The Vusar augmented reality (AR) app, however, runs on mobile devices that users likely already have on hand. “We’ve made it really easy for everybody to have this immersive experience,” said Vusar CPO Brenden Monahan. Early on, the Vusar team experimented with using the Microsoft HoloLens, but found the limited field of view and complexity of dealing with the head-mounted hardware to be barriers to collaboration, Monahan explained. They turned to the smartphone instead because “everybody is used to it, [everybody] has it in their pocket,” he said. 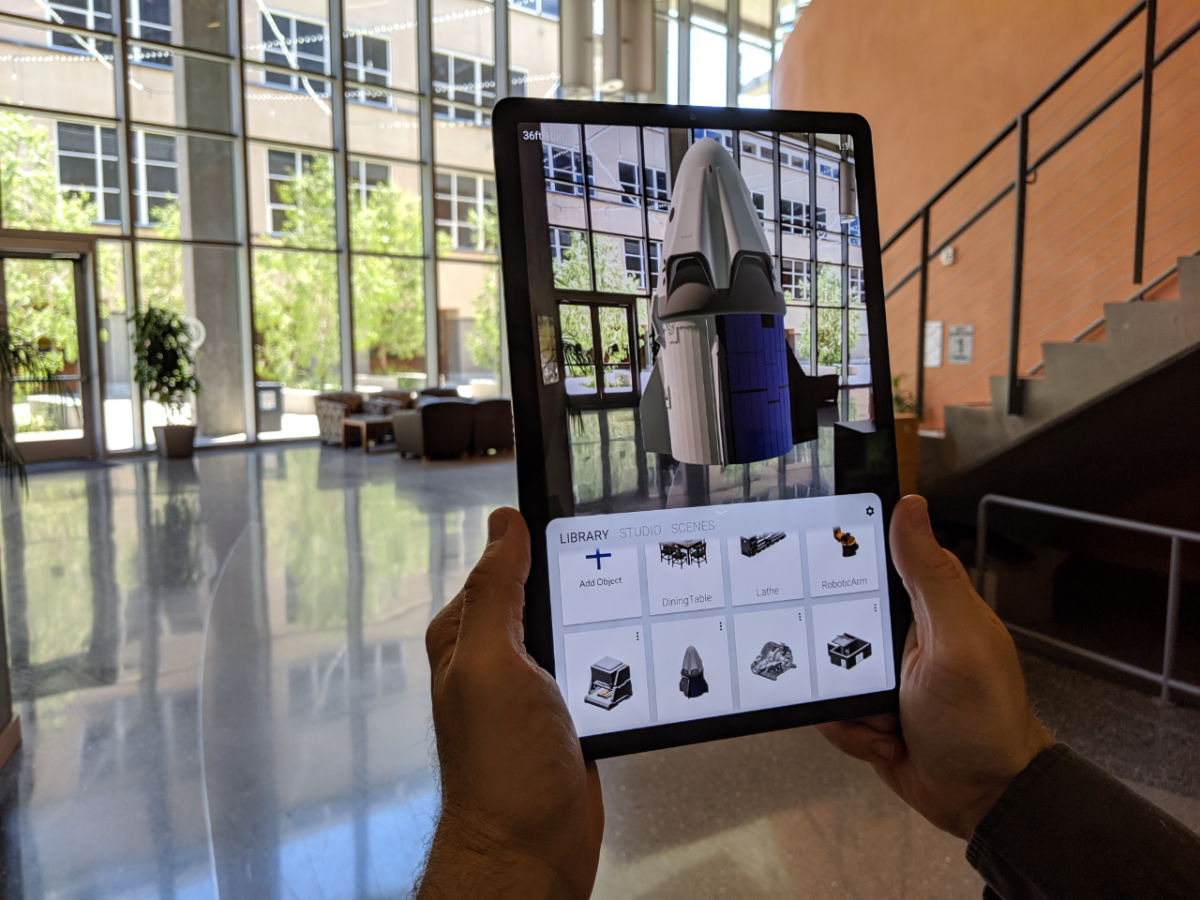 It’s that accessibility and ease of use that distinguish Vusar from other solutions that enable users to view their CAD models in real-world settings, Monahan believes. Competing solutions require “a lot of setup on the back end,” he said. With Vusar, in contrast, “We make it super-easy … you already have the CAD, just drag and drop and you’re off and running.”

Vusar users upload their models into a library that’s shared with other team members; they can then be rotated, translated, and resized in the immersive visualization "studio" (scroll down for a video showing Vusar in action). Multiple 3D assets can be placed into a scene together, if desired, and users can also connect associated data and workflow to their designs. Supported file types currently include STEP, STP, STL, and FBX.

Collaboration at Its Heart

Although CAD software is essential to design creation, it can be isolating, Monahan believes. Paper-based drafters working at tables in shared spaces may have been less productive than their modern counterparts, but they were more interactive; there were “great ideas going back and forth,” he said. Today, computer users working solo in their cubicles are “missing that human element, missing that collaborative element” because there is “just one brain in the room,” Monahan said. “The modern workplace with the typical cubicle farm stifles that creativity, stifles that free flow of ideas … we’ve become enslaved to the technology,” he lamented.

The question, as he sees it, is how to enable everyone on the project team — including sales professionals and customers — to easily evaluate the latest version of a design. “The collaboration aspect is at the heart of everything we do and everything we stand for,” Monahan said. “We’re creating a platform that allows free-flowing ideas to be at the center of the process.” That contrasts with the nature of CAD tools that are restrictive when it comes to file sharing and licensing: “It’s difficult to get information out of CAD and across different platforms so [users] can share and collaborate more easily,” he continued. “We’re trying to unschackle some of the restrictive features that the current state of CAD has, and make [those processes] easier for all users.”

When collaboration is easier and more inclusive, review hurdles can be passed more quickly, speeding the iterative decision cycles that design requires. “This is what the good companies do well,” Monahan said, because it enables them to improve, decide, and act more quickly. “One of the biggest problems with design today is just getting to ‘Yes.’ … We can’t eliminate design review, but we can get stakeholders on board faster,” he said, claiming that on average, users take just two minutes to react to a design when it’s presented in AR. “We are humans, seeing is believing.”

And when design review becomes frictionless, users can adjust review frequency to any schedule that suits their needs and preferences. A project manager, for example, may want to check in at least once a day, and “there are times when only the marketing person can answer your question,” Monahan noted.

Although Vusar is currently focused primarily on product development, Monahan believes the technology has great potential for other fields as well. “It allows you to view [designs] out in the real world … [to see] things you can’t always capture in CAD.” When preparing to place new capital equipment on a factory floor, for example, users can better understand the use of space and spot potential fit and placement problems early, instead of having them crop up during installation. Ergonomics has been a big area of interest, he said; when evaluating workstations for technicians, for example, users can quickly get a sense of what working at them would be like.

Architecture is another prime candidate. As Monahan explained, to peek into a multistory building would normally require a scissor crane or jetpack, but an Android joystick lets you move up and down through a model, floor by floor, with no fuss. For architectural spaces, AR also provides a feeling of depth and in-person perception that traditional monitors can’t provide, he said: “that’s something that traditional CAD can’t do.”

The Vusar app, which had been in beta testing for the past year, graduated from “early access” status this week. It’s available for download from the iOS App Store and Google Play Store. The Pro version is priced at $14.99 per month; the Team version is $34.99 per month, plus $5 for each additional person beyond the first five. A feature-limited free trial version is also available.