The modern PC has come a long way, and that statement holds whether you consider it in the context of reliability, performance, or the ability to scale to a range of price-to-performance points. It has carried a varied load on its shoulders over the years, from its beginnings running spreadsheets and text editors to today’s incarnations that can arguably be called the most capable gaming machines on the planet.

Depending on your history, experiences, and perspective, high-demand visual computing (including CAD) has either been one of those areas where the PC has served its customer base well as the default go-to platform, or it’s the most notable space where PCs have fallen short, requiring that professionals step up to the workstation — a machine that’s evolved dramatically in terms of makeup, but always remained faithful to its ultimate mission of providing the premier platform for professionals.

Whichever camp you fall into, you’ll want to pay attention to what’s been going on in the computing markets lately: An undeniable push is emerging to market a PC that’s not quite a workstation, yet promises a more capable platform for creators than a mainstream PC might. It’s an idea that’s still in the process of solidifying, but for the sake of discussion we’ll call this new flavor of computing device the Creator PC, and you may come across it the next time you go shopping for a CAD machine.

PCs and Workstations: a Cooperative Partnership with Stubborn Historical Misconceptions

Let’s step back, if you’ll indulge me, for a bit of personal history that’s particularly relevant. After studying electrical engineering with a focus on semiconductors and computer graphics, I started working in the late 1980s designing video and 3D graphics chips for workstations (at Digital Equipment Corp, if anyone can remember that name!). We created 3D graphics subsystems for — and only for — VAX and later, Alpha-based VMS (the OS) workstations. These were expensive, proprietary platforms intended primarily for use in the still-nascent CAD and media-creation markets. This combination of silicon, boards, and software was “only for” DEC workstations because at the time, all workstations were vendor-proprietary, and it was laughable to consider the PC appropriate for any kind of professional computing that demanded floating point computation and 2D raster graphics, let alone 3D (floating point is a necessity for 3D graphics). The mid-‘80s PC still ran DOS, sported minimalist CPUs with no floating-point hardware at all, and the CGA-to-EGA-to-VGA progression was still in progress, just beginning to expose primitive bitmapped graphics to applications.

Clearly, the mid-‘80s PC was a far more financially accessible machine (relative to workstations), but it couldn’t handle much more than a spreadsheet or text editor. There was only one choice at the time for anything but the most minimalist CAD project, and to get it, users had to both cough up serious cash and tolerate living thereafter in a proprietary walled garden of computing options — built and marketed top-to-bottom individually by Sun, DEC, IBM, HP, SGI, and Intergraph, along with a few others.

In the late ‘80s and into the early ‘90s, that situation began to change. Sparked primarily by the advent of Windows 3.1 and the prospects of PC-based gaming, development of the PC base architecture and PC-based graphics hardware began to accelerate very rapidly. PCs and GPUs (though they were not yet referred to as such) pulled themselves up by the primitive bootstraps, and although they started well behind the workstation in terms of capabilities, they set a pace of innovation that the individual design houses at Sun and company couldn’t match. It became clear by the early- to mid-‘90s that the paradigm of the traditional proprietary workstation was doomed, as the PC ecosystem was delivering systems whose price-to-performance (and eventually, outright performance) was far superior to anything a vertically integrated vendor could offer. (To me, the emergence of Nvidia’s Quadro — derived from its gaming graphics chips, but tuned to professional use — was the final death knell.)

By the mid-2000s, proprietary workstations were put out to pasture, and some vendors were out there grazing as well, either defunct or as shells of their former selves — including Sun, DEC, and SGI, along with the proprietary workstation development units at IBM and HP (and I went off to find work for PC-based vendors looking to 3D graphics opportunities in PC gaming). Over time, that old traditional proprietary workstation was completely displaced by a new breed, one that tapped into the same pool of CPU, GPU, memory, and storage technologies that the far larger PC market was able to deliver at an impressive economy of scale.

And that brings us to the situation we’re in today: For the most part, mainstream PCs and workstations coexist without stepping on each other’s toes, each dominating different domains. The former remains the mainstay of general-purpose corporate and consumer computing, especially in notebook form (though no longer alone, and now having to fend off competition from tablets and smartphones as consumers realize they no longer need a PC for e-mail, social media, and modest web browsing). And the latter — while transformed in its hardware and software makeup — dominates the professional visual computing landscape, especially at the upper end of the market. Though inside it looks nothing like its proprietary predecessors, the workstation (both mobile and deskbound form factors) has retained its mission to serve professional visual computing applications, and continues to experience solid growth amid its adoption across a range of professional spaces, especially CAD.

But there remains some toe-mashing among products where high-performance PCs and entry-level workstations overlap. Much of the overlap between those two markets has to do with the history of how CAD users’ applications evolved. For those who cut their teeth on applications that were born on PCs — AutoCAD, most notably — the choice for their replacement machine every two or three years naturally defaulted to a branded PC. On the other hand, those that started on applications with histories rooted in workstations, such as CATIA, ANSYS, and PTC (Pro/ENGINEER prior to Creo), were far more likely to stick with a branded workstation as the platform transitioned from mainframes to Unix/VMS minis, to Unix/VMS workstations, and to Windows or Linux x86 workstations. 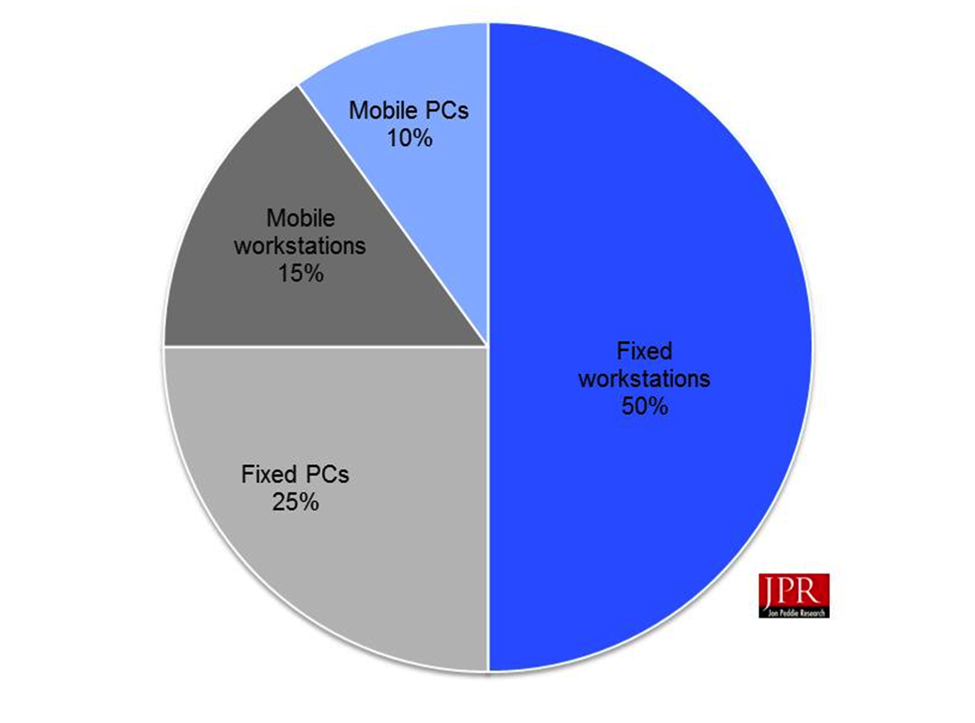 The Creator PC Proposition, and a Few Early Steps in that Direction

And it’s in that context that the grassroots push for this something new — a PC fashioned for creators of content rather than consumers — has gained strength. The premise of the Creator PC? Take the high-end PC, tweak the hardware and software, and market it to sole proprietors and small-to-medium business (SP/SMB) digital content creators in media, architecture, and design.

Now to be fair, the premise behind the Creator PC isn’t particularly new, but calls have gotten louder recently with the emergence of some concrete steps being made in the marketplace, most notably by HP and NVIDIA. And that’s what’s raised this topic higher on my radar and sparked this column. First off, earlier this year, HP began marketing a product that particularly (and presumably intentionally) blurs the line between PC and workstation: the Workstation Edition of its commercial EliteDesk line (which HP later retagged as the model Z1 and positioned alongside the rest of the Z workstation line). In some configurations, the model passes what I would deem workstation muster, offering features above and beyond a high-end desktop PC, if not dramatically so: Quadro GPUs and independent software vendor (ISV) certification. But other configurations can ship with CPUs, NVIDIA GeForce GPUs, and the same memory and storage components as a higher-end commercial or gaming PC: no Quadro GPUs, no Xeon, no error-correction code (ECC), no RAID storage technology, no ISV certification for traditional workstation-caliber applications. Now, given the PC-derived evolution of the modern workstation, I’m not going to argue that a workstation has to have all those things, but I will assert it needs to provide something above and beyond the norm, and to offer value geared to the visual computing professional.