Boxx Expands into Remote Workstations with Help from Cirrascale

With many employees forced to work from home, remote datacenter workstations make more sense than ever — and the arrival of Boxx Cloud Services couldn’t be more timely.


It makes perfect sense: A respected provider of performance-oriented workstations for CAD markets, Boxx has gotten itself into the business of providing rent-as-you-go remote workstations. An offshoot business enabled by its acquisition of Cirrascale, Boxx’s move is a logical extension of its business model. The company positions itself as a provider excelling at high-performance machines, optimized for CAD and digital media entertainment (DME) applications, and delivered with top-end support and reliability. With the business already marketing workstation models for the datacenter, creating its own remote workstation service fits right in.

Boxx Cloud Services has initially been deployed in two US-based Cirrascale datacenters, one on each coast: San Diego and Charlotte, North Carolina, the combination covering all of the US as well as most of Canada and Mexico. Sign up to lease remote workstations from Boxx Cloud Services, and you’ll be provisioned your own dedicated Boxx workstation, housed in a rack in one (most likely the closer) of those datacenters, ready to be outfitted with your own applications and run your own workflow, just as you would on a traditional desk- or lap-bound Windows workstation.

These Boxx Cloud Services nodes might not look like your deskside workstation, but both are built from the same components and deliver the same computing throughput.


Centralized Computing Offers Aid in Good Times and in Bad

As this column has touched on several times in the past several years (for example here and here), the idea of a centralized, remotely accessed, datacenter-resident workstation is drawing a lot of attention. And for good reason, as such solutions address some of today’s most pressing IT challenges: How to deliver 24/7 access to an increasingly scattered workforce that needs to share and collaborate on datasets exploding in size, while maintaining best-possible practices for IT security and robustness. With a centralized computing model, users don't have to be in their offices — or even on the same continent. By storing models in one place and avoiding costly copying, centralized computing can make the “big data” problem far less burdensome. And since the source content doesn't leave the pre-defined cloud boundaries, it's far more secure, and less vulnerable to an IT outage at any one staff site.

Last, but given today’s situation, absolutely not least: remote computing models offer effective mitigation of employee displacement due to disaster. While the advantage of 24/7 access from anywhere — home or office — applies well in normal work environments and normal times, the COVID-19 pandemic showcases how that capability can help alleviate the consequences of having to close the main office, with its traditional workstations placed by each desk. With a remote solution, staff can stay at home and access the same machine they did when sitting in their cubicles. One Boxx client, for example, was just wrapping up its proof-of-concept (POC) phase when the pandemic response began ramping up fast, evolving into stay-at-home orders. That company was able to get its staff outfitted and working at home quickly — a transition that would have been far more problematic in a traditional client-focused IT environment. 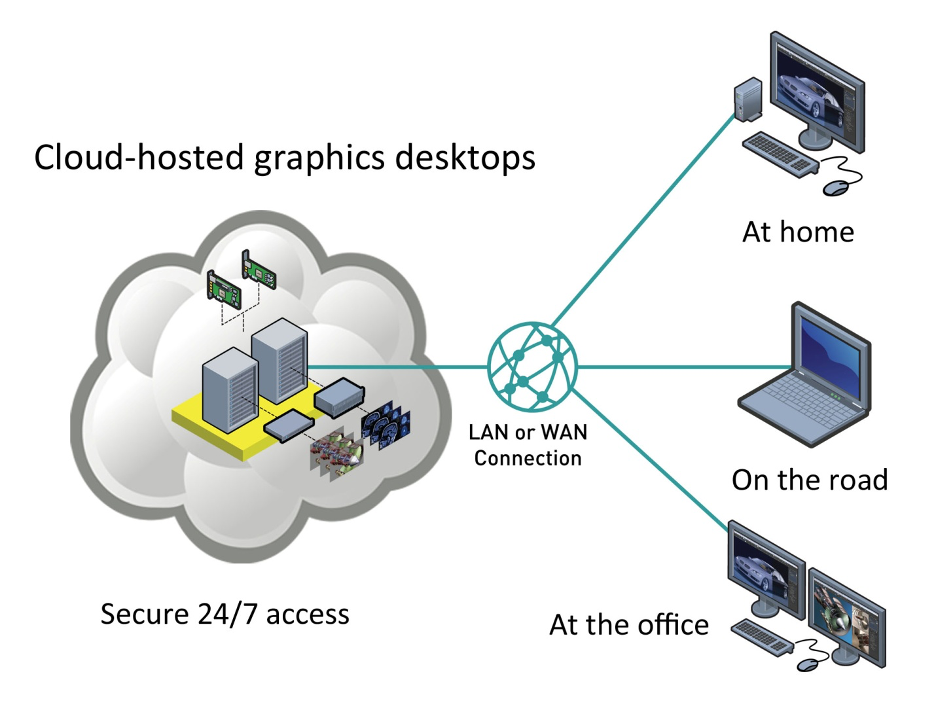 It’s also worth remembering there are advantages of renting compute resources that have nothing to do with the technology, like expenditures often preferable in the form of OPEX rather than CAPEX. For much more on the motivation and considerations for remote workstation computing, both in the cloud and in private datacenters, check out previous columns and series here, here, and here.

On paper, the centralized, datacenter-focused workstation topology offers unique value, but none of that value will matter if the experience is poor relative to the one we’re all accustomed to, delivered by our tried-and-true local desktop and laptop machines. To give one perspective on that experience (albeit a subjective one), I installed and ran a Boxx Cloud Services workstation myself, focusing both on the setup and usage. Supporting my effort, Boxx provisioned me with my own remote workstation, located somewhere in Cirrascale’s San Diego datacenter, relatively close to my home office in California’s northern Sierra.

My machine came outfitted in typical higher-end Boxx fashion, built around an 8-core Intel Core i7-9700K CPU overclocked up to 5.1 GHz. Complementing that CPU is 32 GB of DDR4 2,666-MHz memory, an Nvidia Quadro RTX 4000 GPU, and a 512-GB M.2 PCIe/NVMe SSD. Setup and access to the machine came courtesy of PCoIP Client software, provided by Teradici, an industry leader in remote access to hosted machines, be they cloud-rented or business-owned.

Boxx’s price for such a workstation starts at $750 per month, including all power, maintenance, and support, when renting month to month. The company will discount to $500/month for an annual agreement, and the price can drop even further (into the $300s) for longer-term contracts. In comparison, purchasing the same model in a deskside form factor would set you back (currently) around $4,100.

Physical and Dedicated, Rather than Virtual and Shared

Not all centralized, remotely accessible desktops are created the same; the most salient differentiation is whether the remote host is virtualized or not. Virtual implementations enable one-to-many service, with one physical server supporting a multitude of concurrent clients on multiple virtual machines (VMs), all running on and sharing the single server’s physical resources. Physical implementations provide a one-to-one service, forgoing the virtualization and simply allocating one rackmount datacenter workstation to one remote client.

Of these two options, Boxx Cloud Services specifically — and intentionally — supports the one-to-one physical model, and that presents a tradeoff of pros and cons. For the customer, you can expect the most predictable experience, given the dedicated resources. With a workstation, albeit reshaped for a datacenter environment, you’re leveraging the same CPU, GPU, memory, and storage you’d have with a deskside machine. It’s worth emphasizing that point with the CPU particularly, since more general-purpose nodes optimized for server deployment are more likely to focus on more CPU cores and lower frequencies, a combination that doesn’t lend itself as well to single-user CAD workflows that still depend heavily on single-thread performance. For example, Boxx’s nodes take that differentiation to the max with its signature overclocking to deliver single-thread performance most deskside workstations couldn’t achieve.

And perhaps psychologically, it’s an easier step to take when you know that you still have your own workstation — only the location has changed (though because that location isn’t in a user’s office, the machine can be time-shared to support more than user, including users on different shifts or in different time zones, or who simply don’t need frequent access). Doing so can save dollars per seat, and not just on hardware, but potentially on expensive software licenses as well.

The primary downside for the user is that you have a fixed configuration. With a virtual scheme, in contrast, you can dynamically — literally by the hour — upgrade or downgrade in resources depending on your needs. For example, if the bulk of your day is consumed in visual 3D design but on occasion you jump into high-demand simulations, it might be nice to have the option to pump up your cores and memory allocation, often to supercomputer-level specs. For the provider, the lack of virtualization is both a plus and minus as well, given that it can’t benefit from virtualization’s biggest draw: the ability to more efficiently leverage the physical datacenter resources, which should lead to more optimal ROI. On the flip side, however, virtualization infrastructure is neither cheap nor simple to install and maintain.

It Can’t Get Much Easier Than This

With a new way of doing things may come some trepidation, especially if it involves the computing tools that directly impact your productivity. So it’s worth noting two things right off the bat: One, in the case of Boxx Cloud Services, remember that we’re talking about a machine dedicated to you and only you — just as your desk- or lap-bound workstation is — it’s just that it’s not located by your desk or on your lap, but up in a remote datacenter. And two: In terms of setting it up and using it, you’ll likely find the cloud-hosted machine far easier to deal with.

It might sound intimidating to run a remote machine, or perhaps likely to invite a steep learning curve. Or worse, it might suggest IT problems that you can’t solve yourself, because the machine is located hundreds or thousands of miles away. But neither of these concerns is borne out in reality. Although solutions like these are moving to the computing forefront now, the remote paradigm is anything but new, and datacenter/cloud providers and the ISVs supporting them have many years invested in creating seamless and smooth operation. For example, Boxx Cloud Services setup was super-fast, easy, and error-free, in my experience. I simply downloaded the Teradici PCoIP Client software, stepped through two screens’ worth of simple dialog boxes defining the connection, host address (in this case, my name within the boxxcloud.com domain), and credentials, and I was done. The entire process to get to the hosted remote desktop took maybe 5 minutes, 10 tops — that’s all it takes to get a Windows desktop on your screen. 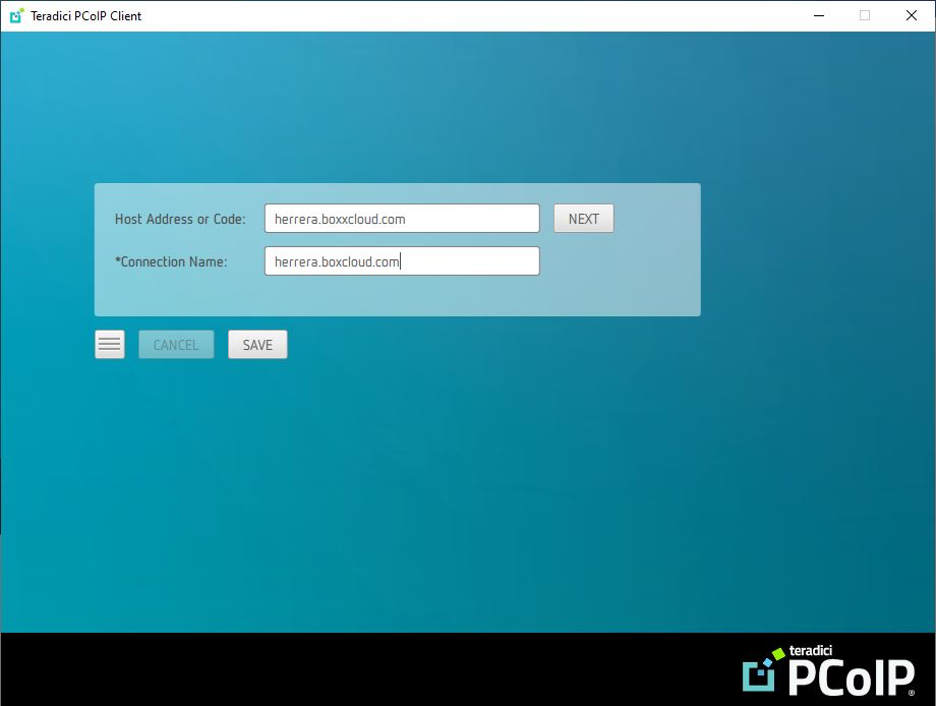 Setting up the remote workstation: step through a couple of simple dialog boxes, and you’re done.


Computing and Graphics Throughput the Same, Regardless of Location — with One Modest Exception

While the desktop screen looks as if it were created locally, there are a couple of things that don’t work the same. Consider CTRL-ALT-DEL to get to the Task Manager or shut down an unresponsive app. Such a keyboard command interrupts the local client machine, not the remote workstation. As such, a separate “Send CTRL-ALT-DEL” drop-down command is required. Similarly, for user-provided devices such as a USB flash memory stick, the system needs to know you’re providing that for access to your remote machine, so there’s an explicit drop-down for that as well.

Other than that, the remote machine has the capabilities and feel that a similarly configured local workstation would deliver. Adhering to the one-to-one dedicated model, there’s no concern about your datacenter’s virtual machine performance being affected by any virtualization/resource-sharing processing overhead, nor other resident VMs running concurrently. (It’s worth noting that the way virtual solutions are structured, VM interference is not a particular problem either, but there can be modest impacts due to heavy memory or storage usage of peer VMs.)

Editor’s note: Watch for Part 2 of this series, which will explore deskside vs. remote workstation benchmarking results, and explain factors that can affect performance.