Herrera on Hardware: AEC firm Southland is a prime example of IT demands that call for a centralized/virtualized solution.


The virtual workstation has emerged as a viable alternative to the traditional physical workstation. No, it’s not yet in use at nearly the same scale as either the tried-and-true deskside or sibling mobile workstation. But usage is climbing, and climbing fast, as more businesses — especially CAD-reliant businesses in AEC, manufacturing, and design — discover that not only does the technology specifically address their most difficult IT issues, but it has achieved a level of maturity that makes broad adoption a safe and sensible choice.

A topology of centralized data, compute, and visualization, hosted on either third-party cloud or owned on-premises datacenters, the virtual workstation approach offers compelling advantages over conventional, distributed, client-heavy environments in data management, version control, security, and anytime/anywhere access. This column has taken deep dives into the technologies and specific solutions available in the market today (for example, see "Harnessing the Cloud for CAD: The Case for Virtual Workstations" and "The Datacenter Workstation Addresses Modern CAD Challenges"). More recently, we took a look at one AEC firm, Mead & Hunt, that’s been particularly aggressive and successful in transitioning engineering and design staff to virtual workstations.

This month, we’ll delve into another case study in virtual workstation adoption, this time with a look at Southland, a large architecture and engineering firm spread across many sites and working on many concurrent projects.

Over time, Southland has grown to encompass multiple design centers across the country, and with every passing year its traditional IT environment — built around a sea of client-side workstations housing compute-heavy hardware and distributed data — showed more and more cracks under the stress of exponentially growing datasets and an ever-more-scattered workforce. It’s one thing to manage small files across a few deskside workstations in a single architectural office; it’s an entirely different beast to deal with huge datasets concurrently developed by teams spread across many locations.

For Southland, sticking with that traditional environment — one where processing, data, and visualization all reside on each engineer’s deskside workstation — would mean duplicating massive databases across its geographical footprint, today encompassing 17 locations and employing 450 designers, typically working on 50 projects concurrently. Like Mead & Hunt, Southland realized that with its trajectory of expansion in data, staff, and geography, the old client-focused model was no longer going to meet its needs. Beyond dealing with cumbersome version control across 17 copies of project data — and potentially disastrous issues when that control fails — the sheer size of that data incurred longer and longer delays when transmitting across networks.

When it came to data bottlenecks, Southland found itself facing far stiffer productivity penalties than even Mead and Hunt did. IT professionals who sympathized with Mead & Hunt’s challenge to copy and sync Revit files of around 3 GB across 30 offices should downright cringe thinking about Southland’s need to keep 50 TB of (multiple) projects’ data up to date over 17 locations.

Of paramount importance was to centralize project data in one shared datacenter, thereby eliminating the expensive, time-consuming process of copying across the wide-area network (WAN). Doing so then led to the next logical step of abandoning traditional workstations in favor of hosting virtual workstations in the same datacenter. If Southland hadn’t taken that step, and instead continued on with engineers and architects processing data on their own office workstations, it would have accomplished nothing to eliminate that data bottleneck. IT managers would still have to contend with shuttling project data back and forth between datacenter and offices, and deal with the hazards of managing multiple concurrent copies of that data.

So as Mead & Hunt did, Southland complemented that centralized database with virtual workstations hosted close to the data, outsourcing the infrastructure to Workspot, a provider focused on delivering virtual workstation solutions equipped for use in applications relying on heavy compute and 3D visual processing — AEC being a prime example. Workspot leverages cloud resources from Microsoft Azure, offering a range of virtual workstation instances, which are essentially analogous to the configured workstation models a provider like HP, Dell, or Lenovo might offer. 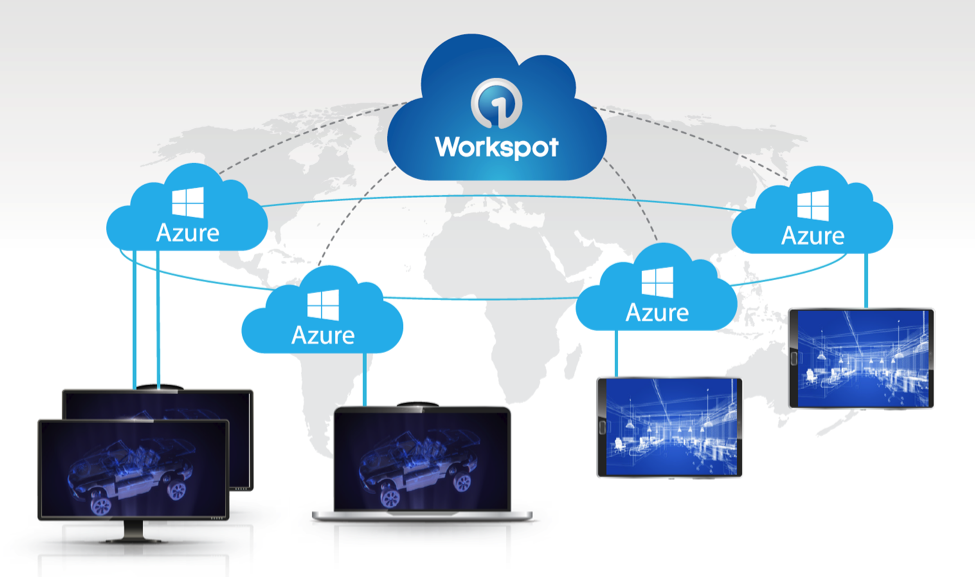 Each virtual workstation instance comes specified with the same basic metrics you’re familiar with on your traditional workstation: CPU, GPU, memory, and storage. All major cloud providers, including Azure, Amazon Web Services, and Google Cloud, populate a portion of their available server resources with workstation-caliber GPUs from NVIDIA and AMD, creating host machines capable of supporting not only remote high-performance 3D virtual machines, but accelerated computing and machine learning applications as well.

Consider the specs of these Azure N-series machine instances, configured specifically for graphics-intensive workstation applications. Touting specs that far exceed traditional entry-level physical workstations, today’s choices range from the NV6 instance, with six CPU cores, 56 GB of memory, a dedicated NVIDIA Tesla M60 GPU, and 340 GB of storage (temporary, initialized every time the virtual machine is spun up), up to the NV24 instance, with 24 cores, 224 GB of memory, four dedicated M60s, and 1.4 TB of storage. 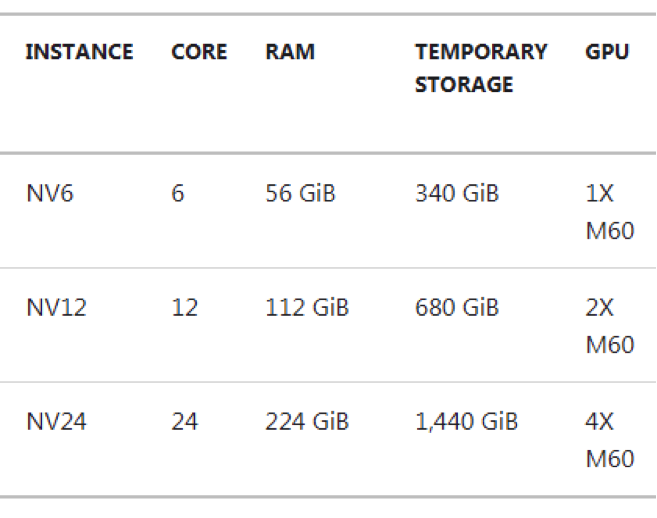 Modern GPUs in server-hosted platforms can be virtualized themselves, capable of being shared by multiple virtual machines, and most cloud providers expose some machine instances with only a portion of a GPU allocated. After experimentation with virtual GPU machines, serving two or four engineers with one NVIDIA Tesla M60 GPU, Southland chose the NV6 instance to serve its core engineering staff. The added CPU and memory horsepower of the NV12 instance proved overkill, but engineers’ 3D graphics demands meant they required a dedicated M60 GPU for each, so NV6 was the right fit.

Being served by a remote cloud-based GPU does not preclude multiple high-resolution displays, and Southland engineers typically have three Full HD monitors on their desks, just as they’d have had when relying on a traditional workstation tower. Supporting multiple monitors today is easy even with laptop form factors — if not natively via HDMI, USB-C, or Thunderbolt I/O, then via a number of high-performance docks available from OEMs (for example, Lenovo’s ThinkPad Thunderbolt-compatible docks).