As the trend described by Moore’s Law approaches its inevitable end, CAD users and other compute-hungry professionals need the industry to find ways to deliver generation-to-generation improvements in performance.

Whereas Foveros is more focused on driving area requirements down (and thereby, driving density up), AMD’s Infinity Architecture is more focused on scaling performance up by integrating multiple base chiplets. In high-end, high-performance computing clusters, Infinity Fabric provides high-speed, low-latency communication between discrete chips on a circuit board. But it also can be leveraged to implement that data channel between multiple chiplets in a multi-chip package, an alternative use that AMD is leveraging to scale up its family of Zen-based processor products, branded as Ryzen, Threadripper, and EPYC.

Besides simply enabling more CPU cores in a single package, the Infinity Architecture–enabled chiplet design addresses one of the troubling current tradeoffs of multi-core CPUs: The more cores populated in a processor, the lower the frequency those cores can sustain, affecting the throughput for continuous multi-thread or single-thread execution. AMD’s approach eases the electrical and thermal constraints of monolithic design, allowing higher base clock rates while retaining the ability to scale to core counts at levels previously unreachable with a single-socket platform — and in the process, driving Moore’s Law–type progress, both by means of more cores and higher clock frequencies at those counts. In particular, note the two bookends of that Threadripper 3900WX family, scaling from 12 cores —at 4.0 GHz no less — all the way up to 64 cores. 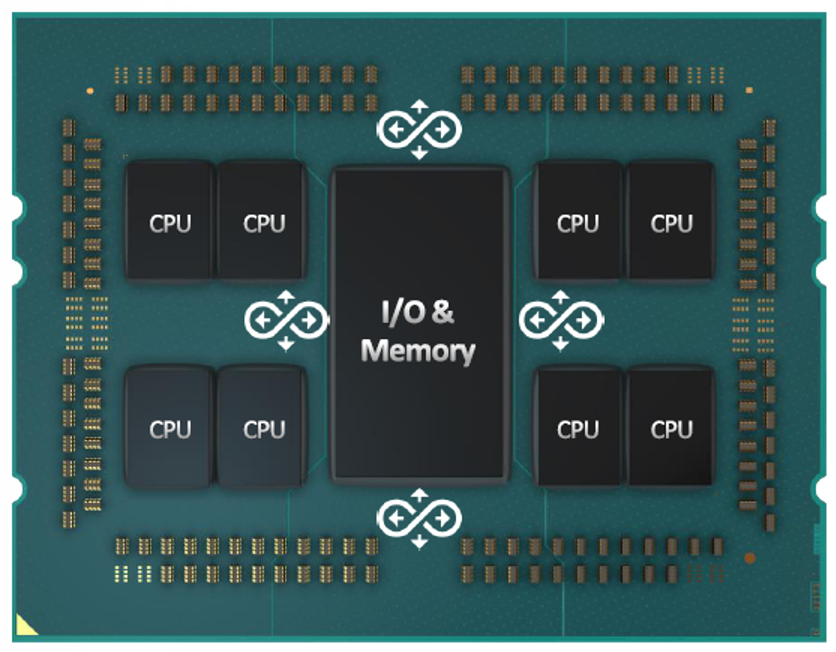 
Keeping Up a Moore’s Law Pace

So yes, the era of Moore’s Law governing the pace of progress of conventional (e.g., CMOS) integrated circuits on silicon is coming to an end. But no, Moore’s Law was never the true end, but a means (albeit the critical one) for an industry tasked with delivering consistent improvements from one generation to the next. But the good news is that progress on that overriding goal continues in earnest. Rather than relying on just the one process lever to press, however, vendors like AMD and Intel are pushing on multiple knobs and dials, the combination of which promises to keep integrated circuit performance and price-performance striding forward.

What does all this mean for CAD professionals who demand higher (to the highest) levels of computing power to drive their own productivity forward, thereby improving their competitive edge over time? Eventually, in retrospect, it hopefully won’t mean anything. That is, the industry will find the means to keep up a pace comparable to Moore’s Law — and who knows, perhaps down the road even more rapid — and how it does so will be transparent to users. You’ll simply face the same proposition that you have every time you’ve considered investing in a new workstation: A new-generation product is available that delivers far more performance than the old at a similar price, so is it time to upgrade? Looking way out, that might be because we’ve entered an entirely new paradigm, like quantum computing. But in the near term, you might get that bang for the buck on your next machine — in total or in part — because of innovative chiplet architecture and packaging schemes like Intel’s Foveros or AMD’s Infinity Architecture.


Author’s disclosure: As a consultant, I am currently assisting AMD in its launch of Threadripper PRO, a CPU product that among other things leverages a chiplet approach to achieve its end goal of density and performance.