The Evolving Role of the Mobile Workstation, Part 2

Herrera on Hardware: It comes down to physics — a deskside can always outperform a mobile workstation. Cadalyst hardware expert, Alex Herrera, looks under the hood of both to break down the pros and cons of each form factor. 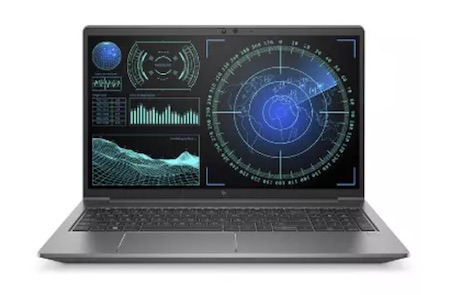 HP’s new ZBook Power G8 mobile workstation released this summer is a great example of the performance and capabilities packed into a 15.6” configuration. Image source: HP.

Last month’s installment of Herrera on Hardware explored the growing demand and evolving usage of the mobile workstation for CAD, while introducing HP’s potent new Power G8 model as a great example of the performance and capabilities available in a highly equipped 15.6” configuration. This month, we’ll compare how a mobile workstation stacks up to a traditional deskside, and how that will continue to impact the mobile’s role moving forward. And, to wrap up this two-part series, we’ll look at how the evolution of CAD computing platforms in general may impact the mobile workstation’s prominence in the future.

The laws of physics and thermodynamics simply don’t bend, and a small, densely populated mobile computer — often running on battery — can never match what a bigger, always-wired machine can manage (assuming maximizing performance is the goal, of course). Furthermore, that will forever be the case, simply because the mobile machine is constrained by far tighter constraints on power delivery and thermal dissipation.

Choices in CPUs are obvious examples. Power consumption, and the resulting heat produced, scales linearly with a CPU’s clock rate (all else equal). Accordingly, CPU suppliers like Intel dial back frequencies (as well as voltages, which have a larger power-of-2 impact on power) to hit certain power tiers that — for mobiles in particular — balance performance and power to optimize both heat and and battery life. So, while Intel markets this commonly branded “11th Generation Core” line of both deskside and mobile CPUs, it turns out that under the hood, 11th Gen Core products for desktops are quite different than 11th Gen Core products for mobiles. Currently, they are based on different designs — Rocket Lake and Tiger Lake, respectively — both built on different microarchitectures and even different silicon processes.

Where a line-powered high-performance desktop or deskside machine with plenty of space to power and cool components will typically accommodate a 125-watt CPU (Thermal Design Power, the max power that the design can manage thermally), a performance-oriented mobile like the Power G8 will top out at 45W, and a battery life optimized consumer or commercial notebook might shoot for 28W or less. To get to those levels, the base clock rates drop commensurately, from 3.6GHz to 2.5, to 2.4, or less. (Note the Turbo rates don’t change much, as they are transient, especially for mobiles, and are throttled back before exacerbating any thermal issues. For a deeper look contrasting base and boost CPU frequencies, check out this previous column). 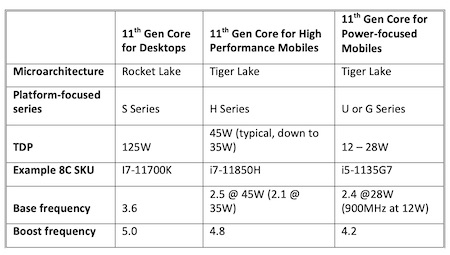 Purposely comparing apples to oranges, the 11th Generation Core series and sample SKUs of desktop to mobile units show the difference between them. Data source: Intel.

How much more performance can a deskside deliver than a mobile? This review of the ZBook Power G8 provided a great opportunity to compare. While it might be possible to configure another conventional, notebook-sized mobile workstation with a bit more horsepower, this Power G8 is not far from the top end of today’s mobile workstation performance spectrum. Our review unit came packed to the gills with premium components, providing about as much performance as possible in a package of its size.

It’s worth stressing that this benchmarking exercise does not intend to weigh the AMD Ryzen 5000 series CPUs over 11th Gen Core from Intel, as the former is tuned for mobiles and the latter for desktops. In fact, as I laid out back in January and supported further a few months later, the two vendors and product families are on relatively even footing these days, after a successful resurgence by AMD on the back of its Zen technology and manufacturing choices. 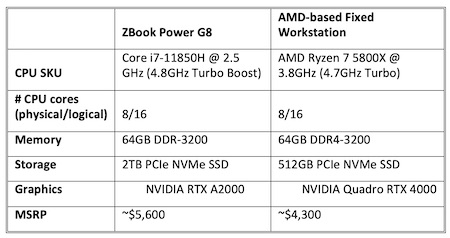 I took a look at both CPU- and GPU-focused performance, for the former using SPEC’s SPECworkstation benchmark and for the latter relying on SPECViewperf. While results varied across SPECworkstation’s extensive range of compute-intensive workloads, the less expensive deskside outperformed the mobile by 35%, on average. 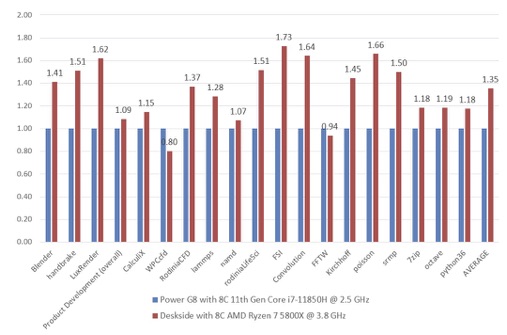 Similarly, testing 3D graphics performance with SPECviewperf 2020 yielded results that on average show the deskside nearly doubling the performance of the mobile. It’s worth noting that, as a more value-oriented mobile, the Power G8’s GPU options don’t tend to range as high as some others, like HP’s own ZBook Studio and ZBook Fury. So, other mobiles could assuredly hit higher SPECviewperf 2020 numbers. 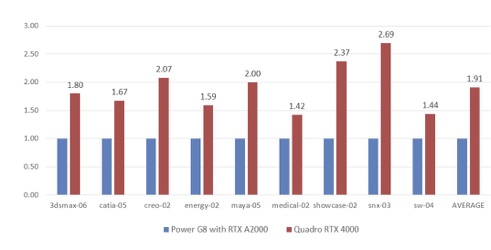 To emphasize, the above testing is not comparing apples with apples, but quite intentionally the opposite. While the mobile workstation performs a role that the fixed machine can never match — the very reason it’s become a must-have staple for most professionals — the point here is to illustrate that the flip side is also true: the deskside can achieve something the mobile never can. They are apples and oranges, and while some might accept getting by with just an apple or just an orange, most will still want both.

Ultimately, while I marvel at what a vendor such as HP can achieve in a battery-powered notebook form factor like the Power G8’s, there simply is no free lunch in engineering. In fact, the design — in particular balancing performance, cooling, size, and cost — demands far more attention on the mobile side of things than the deskside.

What’s the bottom, inescapable line? If you want a device with more mobility, you’ll have to give up some performance. And, if you want more performance, you’ll have to give up some mobility. There’s just no way around it, and it’s not just a tradeoff among PC or workstation machines. At the extremes of the computing spectrum, for example, a supercomputer delivers best performance with no mobility, while a smartphone provides the ultimate mobility, while sacrificing the most performance. In between are a range of devices, including the breadth of the workstation market where mobile workstations have to sacrifice some level of performance for a package that travels. 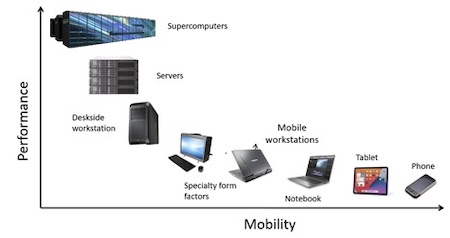 Performance vs mobility: a bendable but unbreakable tradeoff.

Add it up, and for CAD pros that still benefit from every possible drop of performance they can get — and perform the bulk of their work at the desk — the better suggestion is not to replace your deskside workstation with a mobile, but replace the generic laptop PC you may be using on the road now with a mobile workstation like the Power G8, delivering optimal performance and reliability in a notebook form factor.

The Mobile Workstation’s Vital and Expanding Role: The Short and Long Term Outlooks

All that said, for every rule there are always exceptions. And, for some, using a mobile as your primary — or even only — CAD machine can actually be viable, preferable, or even mandatory. Some cases that might make sense include situations like:

While you can always find more performance and performance per dollar in a deskside, what if there’s no point getting more performance? What if your computing demand really hasn’t changed much over time, and the level to which the mobile workstation has risen is enough for your workloads? For those users, the computing power they already have has never been a limiting factor to productivity, and there is no point looking for more performance. 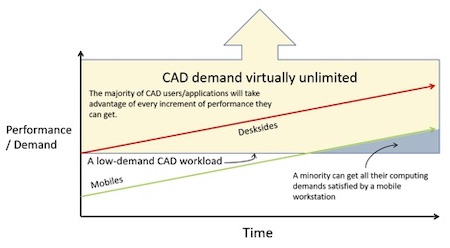 The mobile workstation may serve as the primary machine for a minority, but the deskside is better equipped for CAD demand today and tomorrow.

What’s another exception to the deskside-first rule? Where mobility isn’t just a nicety but a necessity, and is so for the bulk of your work. Think of remote AEC, on-location digital media, oil/gas fields, or offshore rigs, for example. There is no desk, or only rarely one, making a deskbound machine impractical.

Worth noting, for applications like those, creative vendors are marketing machines that range from designs that extend well beyond the svelte notebook package of the Power G8 and its peers. Reasonably characterized as a laptop-on-steroids, a “mobile supercomputer” from vendor Eurocom can deliver performance much closer to that of a deskside, but will do so with a more substantial compromise in mobility. For example, Eurocom’s Sky X9C weighs in at 12 lbs and measures nearly 2” thick (and that doesn’t count the power adapter — make that a brick — far bigger and bulkier than the norm). Also pushing up the performance and form factor a notch closer to desksides are machines like Next Computing’s “luggable” workstations, packaged in what is essentially an overhead bin-sized suitcase. Of course, their added bulk is no indictment of either vendor’s products, but rather further evidence of the unavoidable tradeoff in mobility when higher performance is a must-have. In fact, both Next and Eurocom have carved themselves smart niches with unique products fitting between conventional desktops and notebooks.

A Wild-card in the Deskside vs. Mobile Tradeoff: Centralized Computing

For both these kinds of users — either those with low-demand, legacy-type workloads or those that simply can’t count on a desk or power outlet for the bulk of their work and time — a mobile workstation might make sense as a deskside replacement. But, while certainly representing valid computing models, those usage models represent exceptions and don’t reflect the most common model: one where design and simulation time is spent mostly at the desk and on workloads that can always benefit from a bit more performance.

However, there is another emerging paradigm where a mobile workstation could make a lot of sense serving as the CAD designer’s one and only device, and it’s a paradigm that in the end may be the most common. A centralized computing model, one where the workstation is actually being hosted — virtually or physically — in the datacenter rather than the desk would flip the deskside vs. notebook argument on its head. As explored previously in this column, the centralized model moves all the computation and graphics processing from the client (desktop or laptop) to a server node, possibly on the premises in a private datacenter, or in the increasingly likely scenario, in some remote cloud provider’s datacenter.

Add it all up, and for the bulk of users, a mobile workstation makes the ideal complementary computing device for the CAD professional. For the few, it can suffice as the one and only workstation. And if and when the deskside is finally displaced as the default CAD workhorse, it will likely be a datacenter server that does the replacing, not a mobile workstation.

For more on CAD workstations and other related hardware, go to Cadalyst's CAD Workstation Resource Center.