RDV Systems, a developer of visualization and building information modeling (BIM) software, has announced a 3D modeling plug-in for AutoCAD Civil 3D and Bentley MicroStation users that extends its 123BIM platform. The plug-in, named 123BIM Publisher, is designed to help users create interactive visualizations by publishing their projects in a Google Earth–like environment. The finished visualization experiences are accessible to any project stakeholder with an Internet browser, so members of the public and others can virtually explore sites of proposed change at their leisure.

Securing approval from the citizenry is crucial for Departments of Transportation (DoTs), engineering firms, and other organizations that implement civil engineering projects that impact the public. “If they don’t get the votes during a public hearing, the whole thing can go back to the drawing board, which is a disaster,” explained Dolio Kafri, vice-president of North America sales for RDV Systems. “Not everyone goes to public hearings, but the people who do go really care.”

It is difficult, however, to convey with CAD drawings just how a particular project will affect traffic flows, views, storefront access, and other aspects of daily life. “[Design and engineering professionals] find it hard to communicate with others, because you basically need another CAD machine to show it,” said Kafri. In addition, “you’re showing drawings, not giving a sense of what looks like in real life.”

Existing visualization tools can provide viewers with a better sense of the big picture than CAD drawings can, but they have their own drawbacks, said Kafri. For example, “a video in 3ds Max can be beautiful looking, but it’s a statement of a particular moment in time,” he noted. Renderings and still images are also limited to representing a “snapshot” of a project, and cannot be adjusted or explored by the viewer. “There’s no way to create an interaction,” Kafri observed.

In contrast, visualizations created with 123BIM Publisher are “completely interactive,” according to Kafri. “It takes the level of interest and communication with stakeholders to a completely different level, because this [visualization] is not just a statement, this is how it’s going to look … it is a tool that enables DoTs to get quick project approval.”

Of course, design communication needs aren’t limited to educating and persuading the public. Engineers and other professionals can also use the 123BIM platform for collaboration with remote colleagues, by having two or more people log into the same project visualization simultaneously. “A lot of collaboration is required [in the AEC space], but existing collaboration tools are not always up to speed and convenient for people to use,” said Kafri.

To create the visualizations, CAD designs are converted to 3D digital models and uploaded to the 123BIM platform on the cloud. In addition to the data from their CAD programs, professionals can use 123BIM Publisher to import aerial photographs, geographic information systems (GIS) data, laser-scanning data, SketchUp models, and other data types to provide more context for their designs, or give a better sense of how they will function. A PTV Vissim traffic model, for example, can demonstrate how cars will move along a proposed highway interchange.

Viewers can access the 123BIM.com portal through any web-connected device, then explore the visualization at their own pace, zooming, changing perspectives, and clicking to jump to any point in the model. In situations where multiple approaches are being proposed, viewers can select from a menu to quickly switch between the various options and compare them.

In the town of Wiscasset, for example, the Maine DoT needed buy-in from the public in order to upgrade a heavily used highway that served as the town’s Main Street and provided residents and tourists with beach access. With the 123BIM visualization, Kafri observed, local residents were able to evaluate the design options for themselves and “answer the question of, ‘How does it look from my house?’”


The Maine DoT presented the design options at public meetings, and also employed the 123BIM Virtual Tour tool, which enables professionals to prepare guided tours to show proposed designs to the public. (You can explore the Virtual Tour of the proposed Wiscasset upgrades here.) After viewing the options, the community selected one that is now in the detailed design phase; construction is slated to begin in 2018. 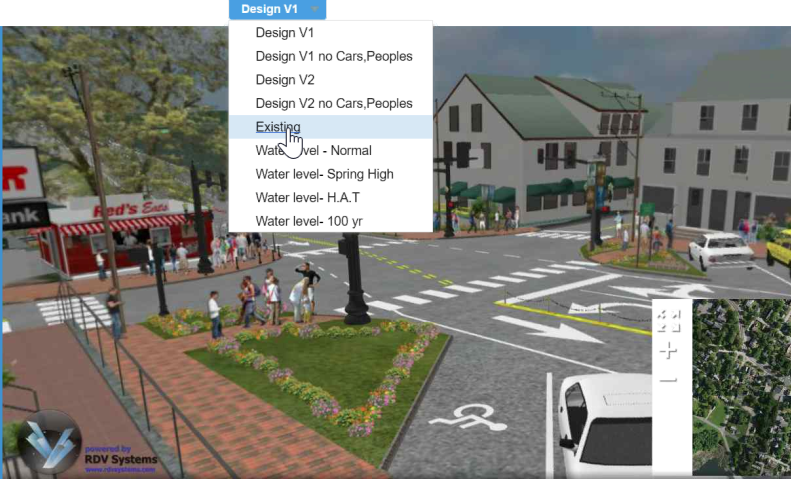 
A desktop application, 123BIM Navigator, enables users to work offline and capture animations and still images of their projects; design updates are downloaded from the cloud when Internet access is available. Kafri pointed out that the refresh rate is faster with the desktop version, making panning faster and smoother.

RDV Systems both develops the software that enables creation of 123BIM visualizations, and hosts the visualizations so they can be viewed. “The hosting model is where our business is,” Kafri noted.

Costs start at $400/month for four consecutive users. (That latter number refers to collaborating creators; in contrast, the number of members of the public who can view a completed visualization via the browser interface is unlimited.) “The cost is a fraction of what they’ve created before,” said Kafri, referring to rendered flythrough presentations and other methods of conveying design intent to stakeholders.

In January 2017, RDV Systems intends to roll out a new dashboard. An additional goal for next year is expanding the Publisher tool to bring in data from additional applications, such as 3ds Max, said Kafri.