The two companies are collaborating to help users turn design data into “virtual experiences that help you work better and do more,” in the words of Autodesk CEO Andrew Anagnost.


A little more than a year ago, Unity Technologies announced an effort to more closely integrate its development platform with Autodesk tools. The collaboration made Unity the first creation engine to have access to Autodesk FBX software development kit (SDK) source code. (The SDK helps developers transfer their content into FBX, which is a proprietary Autodesk format used for exchanging data among applications including Autodesk 3ds Max and Maya.)

Unity Technologies has expanded beyond its foundations as a game engine developer in recent years, and has been providing its technology to a broader range of applications. The Unity platform can be used to create interactive 2D, 3D, virtual reality (VR) and augmented reality (AR) experiences. Increasingly, it’s being applied to AEC applications, such as creating visualizations for architects to give their clients a realistic preview of the appearance and functionality of completed designs. For clients and project teams alike, these interactive views “help them experience the project before it’s real,” said Jim Lynch, vice-president and general manager of Autodesk’s construction business unit, during the Architecture, Engineering, and Construction Keynote at Autodesk University (AU) 2018.

During the event, Autodesk and Unity announced the next step in their collaboration: Native export from Revit to Unity will be available for data visualization in the fall of 2019, said John Riccitiello, CEO of Unity Technologies. (Users can move a Revit model and its associated building information modeling [BIM] data into Unity currently, but it’s reportedly a difficult and time-consuming process requiring multiple plug-ins, and some of the Revit data can be lost in the transition.) “All of you can start to experience a design space at human scale, as if it was already built and functioning, and you’ll be able to do this as soon as next year,” Andrew Anagnost, Autodesk president and CEO, told AU attendees.

Design data, when coupled with the “massive ecosystem” of Unity developers, can give rise to “virtual experiences that help you work better and do more,” according to Anagnost. “Our collaboration with Unity is going to help all of you make better decisions for making everything from buildings [and] cars to training materials and entertainment. Imagine the power of AR/VR and what it would give you as you design and build your projects, as you collaborate with your clients, as you sell your projects.”

Riccitiello demonstrated “walking through” an office space design in an immersive 3D environment, at scale. “In this type of visual high fidelity, you’ll stun your prospects and clients alike, and ultimately, lead to increase in the number of bids won,” he said. But an attractive appearance is not the limit of what a Unity-based experience can offer; “interactivity is a key differentiator,” Riccitiello said. Doors open as a user approaches them, providing the opportunity to check the clearance of the door’s path near a conference table, for example. “Driving consensus by using real-time visualization is key to helping you avoid costly mistakes,” he said.

In addition, BIM data can be overlaid on the environment. For example, a user could simply look at a wall surface to see the type of material, supplier, manufacturer, installer, and other details listed there. This is a contrast to the loss of BIM data that Riccitiello said is common in most of today’s design visualization workflows. Users can also apply data visualizations to designs, he explained. 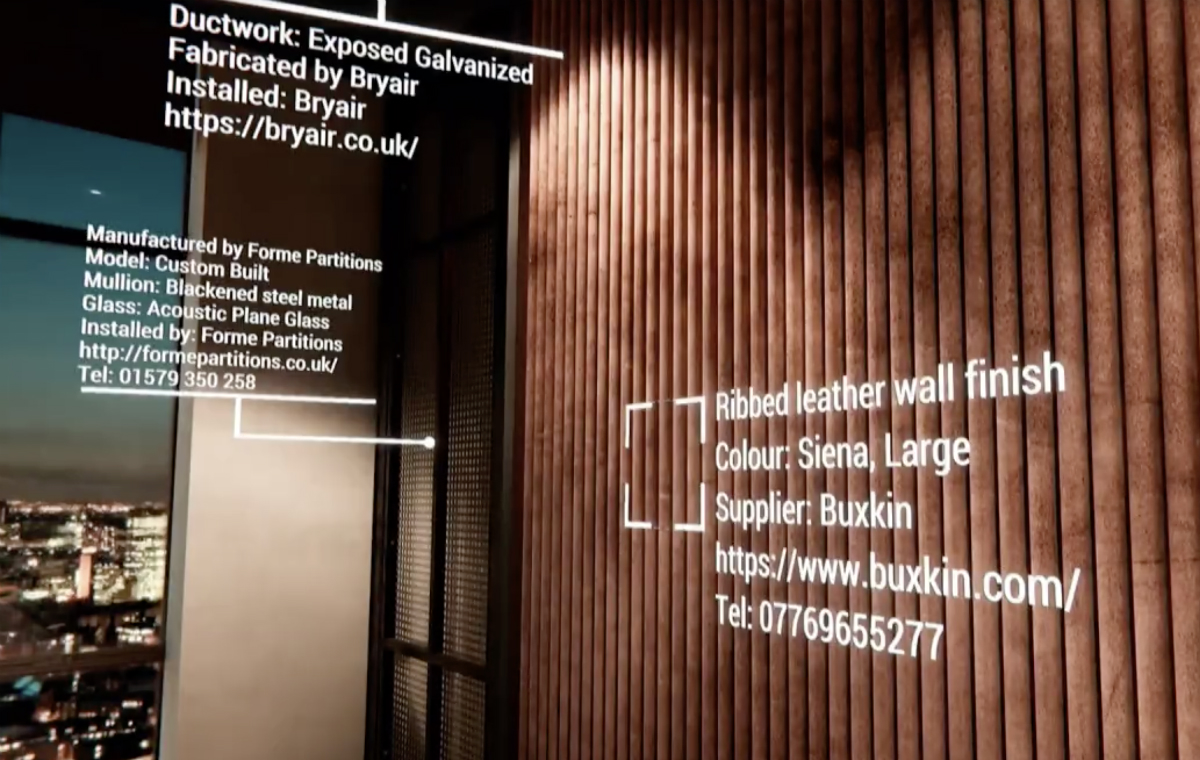 Riccitiello demonstrated how BIM data, such as the type of building material or its supplier, can be overlaid on the interactive 3D environment.

In addition to the planned Unity integration that will enable users to make their Revit models into VR experiences, the collaborators are also planning two more projects to make their appearance by next fall. The first is an integration with VRED, Autodesk’s 3D visualization software for the automotive industry. The goal is that users will be able to bring VRED data into Unity “in minutes,” where they can reuse the data to make real-time applications, such as car configurators, for marketing, training, and other purposes. According to a post on the Unity blog by Dan Prochazka and Rick Armstrong, “In the past, converting VRED models for downstream use typically took hours for each version of a model. This new capability will result in major savings across the multiple design versions typical for every vehicle project.”

And to round out the list, Autodesk and Unity are creating an integrated solution intended to help professionals using Unity for media and entertainment projects to manage multiple types of files with Shotgun, an Autodesk application for management of creative assets.