There aren't many types of work within the built environment that American Structurepoint doesn't perform. The Indianapolis, Indiana–based company offers services in disciplines including highway and bridge design, architecture, construction inspection, environmental site assessment, wastewater treatment, master planning, landscape architecture, investigative engineering, surveying, site development, and information technology. Since it was founded in 1966, the company's staff members — now numbering nearly 300 — have won multiple awards for their work. American Structurepoint has taken on projects such as Hyperfix and Super 70, which are major interstate rehabilitation projects in Indianapolis; the Anson residential and commercial development in northwest Indianapolis; and the Keystone Parkway reconstruction project in Carmel, Indiana, which features six roundabout interchanges — a first for the Midwest. 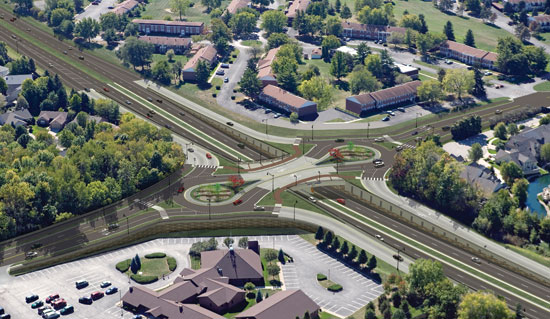 To communicate to clients how projects look and work, the American Structurepoint team relies on high-detail, photorealistic renderings and animations. Preparing these presentations, however, is a very CPU-intensive process. Until recently, the firm relied on a makeshift rendering farm, grabbing CPU minutes from dozens of PCs whenever they sat idle.

This unreliable setup meant renderings were slow; creating a single still image often required more than four hours. "The farm was crashing and jobs were mired in delays," said Cash Canfield, manager in charge of the graphics department at American Structurepoint. "If we were going to produce animations, we had to get serious about supporting that process."

Lacking in-house expertise in visualization support, Canfield called on Avatech Solutions. The first step that Avatech took was to conduct a "state of the union" assessment to better understand what American Structurepoint's end goal was and where exactly the company was along this path. The firm's ultimate aim was to provide visualization with every project. Avatech helped American Structurepoint take a step back and review their entire process.

After this roadmap was laid out, Avatech determined where potential and real bottlenecks were located and then created solutions to overcome these issues. The solutions included upgrading both the software and hardware systems, as well as customized over-the-shoulder training. American Structurepoint's IT Services Division, in conjunction with Avatech, recommended that the company migrate to a dedicated rendering farm, adding four quad-core Hewlett-Packard workstations and upgrading to the latest version of Autodesk 3ds Max animation and rendering software to improve performance. American Structurepoint contracted Avatech for more than 150 hours of consulting time. Avatech focused on training employees, developing new methodologies, and incorporating best practices.

The combination of more horsepower and workflow improvements cut rendering times from hours to minutes, and yielded higher reliability as well. "We can quickly figure out the best solution for a project because we can visualize the final design better," Canfield explained.

Rendering animations more quickly — in one example, rendering time went from nine minutes per frame to less than two minutes — has transformed the workflow at American Structurepoint through increased efficiency that helps the company improve client service and take on more projects with the same number of people.

The new solution is also more reliable. "When we're working on a project, we don't have to worry about the farm crashing or not working," said Canfield. "We can rely on it to get our work done in a timely fashion. Before, we'd have to come in on the weekend or Monday morning and make some urgent fixes."

Adding Impact to Proposals. American Structurepoint often presents building and construction projects to community groups. Historically, this meant showing the public two-dimensional drawings. Now the company can help stakeholders visualize how a highway, bridge, or underpass will look in real life through the use of three-dimensional animations. This capability sets American Structurepoint apart from its competition and has given it an edge in a tight economy, the company reports.

"People are always impressed with our proposals and presentations, particularly the level of realistic detail in the renderings and animations," Canfield noted. "They've seen cartoonish renderings from other consultants, so they often do a double-take with ours, to determine if it's a genuine photograph. We really strive to make it look like the final product and fit in with the surrounding photography." 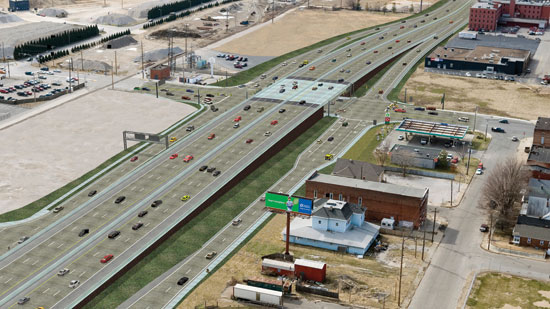 Realistic renderings, like this view of the 3SR 26-Fulton Avenue interchange in Evansville, Indiana, can help stakeholders visualize a project more accurately.

With its new software and hardware in place, the team at American Structurepoint is also producing better designs, Canfield said. "We can quickly figure out the best solution for a project because we can visualize the final design better.

Traut added, "Our team learned new and better ways of doing things, and we're now much more efficient. The rendering farm and our software now run very well. We've even reduced our file size, which is something Avatech taught us. Now we can e-mail files to clients instead of burning a CD, so we're consuming fewer resources and keeping overall costs down."

Today, American Structurepoint is busy completing its current projects while planning to take on future challenges. "Now that we can really leverage this technology, we want to continue to push it to the limit and experiment with new techniques," Canfield said. "For example, we're talking about taking our three-dimensional models and linking them with live video shots from a helicopter to produce even more lifelike animations."

About the Author: Kevin Breslin