What NVIDIA calls “the biggest advance in computer graphics in 15 years” may lead to collaborating, creating, and reviewing designs in immersive virtual reality.


At NVIDIA’s GPU Technology Conference (GTC) this week, the company made a bold claim: it has “reinvented the workstation” with the introduction of real-time ray tracing. NVIDIA RTX technology, in combination with the new Quadro GV100 graphics processing unit (GPU), “makes computationally intensive ray tracing possible in real time when running professional design and content creation applications,” the company reports.

For product and architectural design professionals, the promise is the ability to create photorealistic visualizations of 3D models that are interactive: as the model or perspective change, the lighting changes accordingly — in real time. According to Bob Pette, vice-president of Professional Visualization at NVIDIA, “Artists and designers can simulate and interact with their creations in ways never before possible, which will fundamentally change workflows across many industries.”

NVIDIA RTX, which was introduced last week at the annual Game Developers Conference, is a real-time, scalable ray-tracing technology running on NVIDIA Volta architecture GPUs. Although the real-time aspect is new, ray tracing itself is not. It simulates the real-world behavior of light, “tracing” the paths that beams of light would take as they reflect off or pass through various materials, finally making their way to the viewer’s eye — or not, if they are absorbed. After these paths and the resulting degrees of illumination and shadow are calculated, ray tracing technology can assign colors to each pixel that correspond to how it is affected by that simulated light. 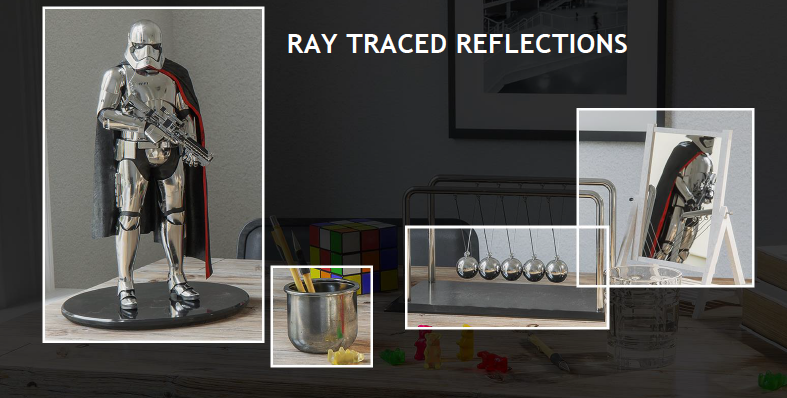 The result of using ray tracing to handle reflections in renderings “is utterly beautiful,” enthused NVIDIA CEO Jensen Huang. “It’s just super, super hard to produce.” The company seeks to change that with a new solution that enables real-time rendering.

Ray tracing produces lifelike results, but the downside is that it’s an extremely demanding process, often conducted in render farms and taking hours or days. “All of those computationally intense problems — the effects of light as it travels through your room, the environment — is so hard to compute,” NVIDIA CEO Jensen Huang told the crowd during his keynote address at GTC 2018. “So long as things don’t move very much, the lighting conditions are relatively well reproduced, and it’s quite beautiful,” he observed. "The more reflections, the more refractions, the more ways that the light — the ray — can bounce before it’s absorbed completely … the harder it is.”

Because of this difficulty, real-time rendering has largely been the domain of rasterization, a process which represents objects with meshes of joined repeating shapes, such as triangles. These shapes are converted into pixels, which are in turn processed (“shaded”) for a more realistic appearance. But with its new announcement, NVIDIA is making ray tracing a viable choice for real time rendering. Rather than one method making the other obsolete, however, NVIDIA expects that hybrid renderers — which combine rasterization and ray tracing — will be the best choice for many use cases.

The Tech That Makes It Possible

Advances in 3D rendering that enable designers and engineers — and their clients — to view the results of changes in real time can speed the design process dramatically. As SOLIDWORKS Visualize Product Portfolio Manager Brian Hillner commented in a release, “The new Quadro GV100 with RTX technology delivers unprecedented real-time ray-tracing performance, helping our customers to be first to market, gaining hundreds of thousands of dollars over their competition each year.”

But NVIDIA’s announcement goes beyond that, promising support for collaborating, designing, and creating in immersive virtual reality (VR). With physics-based, immersive VR platforms (such as NVIDIA's Holodeck) based on NVIDIA technology, professionals could conduct design reviews and explore photorealistic scenes and products at scale, the company says.

The NVIDIA Quadro GV100 is available now from NVIDIA ($8,999), and will be offered by select workstation OEMs beginning in April.