A new application from Luxion enables users to experience interactive visualizations without high-powered hardware — or a copy of KeyShot.


Luxion is a developer of rendering and lighting technology best known for KeyShot, a real-time ray-tracing and global illumination program for 3D rendering and animation. On April 5, Luxion launched KeyShot 7.3 and KeyShot Viewer, a new, free, standalone application for macOS- and Windows-based KeyShot users — and anyone they collaborate with. “You don’t need a regular version of KeyShot installed to run it, so anybody can literally download, install, and open up KeyShot Viewer,” said Rex Roberts, UX design lead at Luxion.

Roberts demonstrated the new application on a computer powered by a dual 12-core Intel Xeon processor — but pointed out that it could have been a tablet instead. “KeyShot Viewer does not require a powerful machine to run on,” he confirmed.

KeyShot Viewer is intended to facilitate design reviews, interactive presentations, and visual collaboration. It “can open any KeyShot package file for interactive viewing, presentation, and also configuration if the scene has been set up with it,” explained Roberts. (This configuration setup is done in a wizard in KeyShot Pro.) A KeyShot package file (KSP) collects all the elements of a visualized scene — including custom materials, textures, and HDRI files — into one compressed file for easier sharing with collaborators or clients. 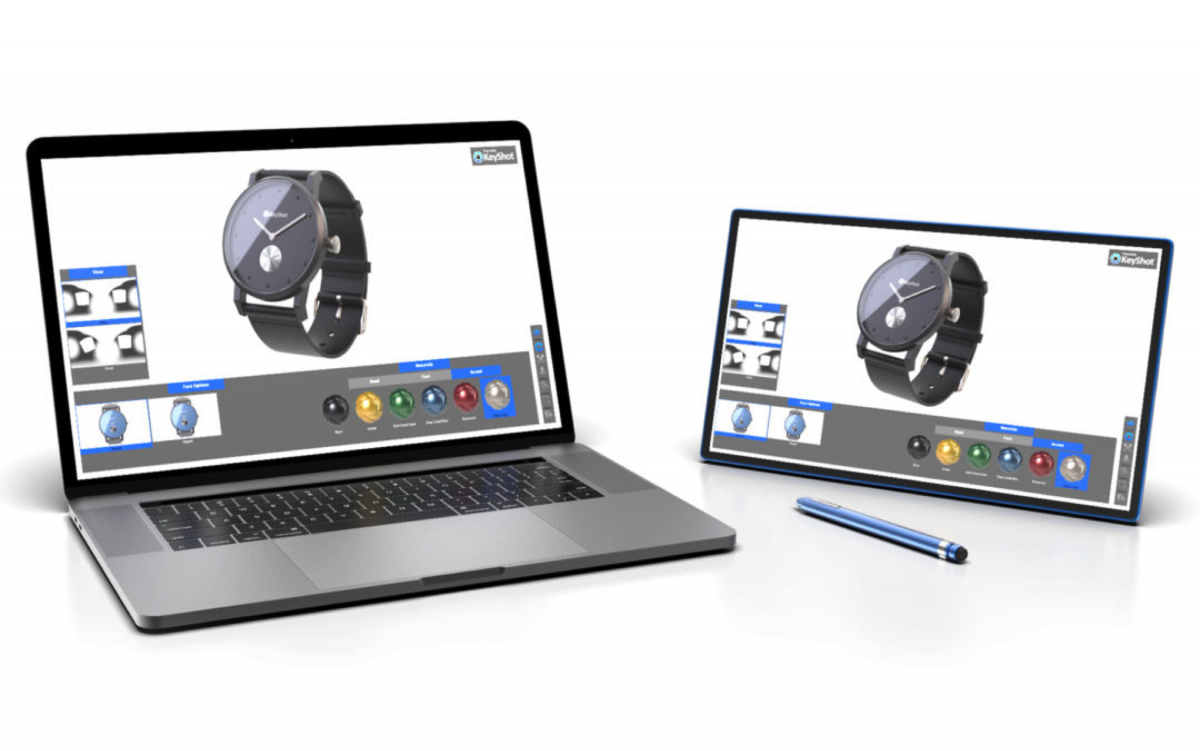 KeyShot Viewer, a touch-enabled desktop application available for Mac and Windows, enables KeyShot scenes to be securely shared with anyone for interactive viewing, presentation, and configuration. Image courtesy of Luxion.

KeyShot 7 introduced the capability to create unlimited studio, model, and material variations, which are “useful during various stages throughout the product development process,” according to Luxion. Expanding on that functionality, KeyShot Viewer enables users to present visuals in “a way not possible before,” the company says: in real time with accurate lighting, shadows, and material appearance. Rather than viewing a static rendered image, they can choose to apply the studio, model, and material variations in KeyShot Viewer and see the results in real time. 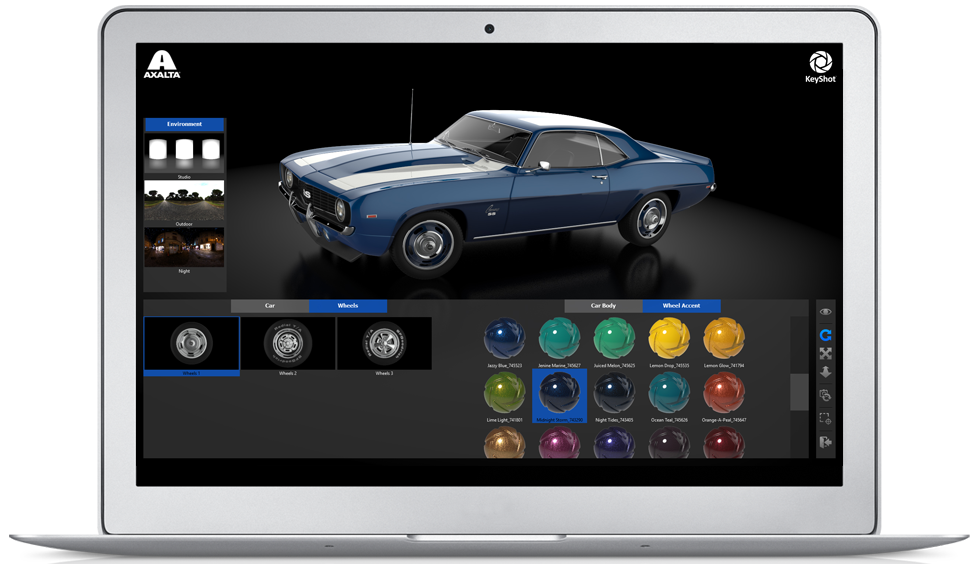 In KeyShot Viewer, users can click (or tap, if they are using a touch-screen device) to apply different studio, model, and material variations that were set up when the file was created in KeyShot. Image courtesy of Luxion.


“This functionality is the essence of KeyShot Viewer,” Roberts explained. “Being able to select and explore different variations makes it a powerful new tool for your organization to use to make design decisions, and for visual validation.”

To enable real-time interactivity, KeyShot Viewer uses the same CPU-powered rendering engine as KeyShot itself. This means that users can move the model onscreen — rotating it for a view of another side of a car or watch, for example — or select a different material, and the image will automatically be rebuilt accordingly. The image adapts immediately, but is rougher at first and is perfected as the computer has more time to refine it, improving until it reaches a photorealistic appearance or another change is made by the user.

If the scene has been configured to allow it, users can click the screenshot icon on KeyShot Viewer’s toolbar to simultaneously save the current view as an image and output a metadata file. The XMP-format metadata file provides a record of which variations were applied at the time the screenshot was captured, and includes camera information that users can reference when making changes to the original scene in KeyShot. This file can be opened in any text editor application.

To output a KeyShot scene file, users first apply their desired light and materials within KeyShot, then save the file, which can be shared with anyone. Password encryption and a watermark option increase security when sharing outside the originating organization. In addition to viewing and interacting with the file via the KeyShot Viewer, users can also choose to display it on a tablet or a high-resolution touch panel, as Viewer is touch-enabled.

The impact on visualization workflows has the potential to be very significant, depending on how much time an organization normally spends putting together multiple renderings to communicate various options in colors or materials. “You can send the scene to a product manager or a company executive to get buy-off; to a distributor or manufacturer to accurately communicate CMF [color, materials, and finish] for production; or even to a customer to make purchasing decisions without having to spend time rendering a single image,” explained Roberts.

Justin Schlothauer, senior 3D Industrial Design and Engineering manager for Under Armour, reported this effect at his company: “KeyShot viewer enables the distribution of real-time product configurations to non-users and users alike. This has drastically reduced the amount of time spent on rendered output.”

KeyShot Viewer is available now for free download from the KeyShot site. In addition, KeyShot RenderWorld, to be held May 21–22, 2018, in Huntington Beach, California, will include opportunities for attendees to try the new software.