The digital design world relies on a pair of scrying tools to see into the future: simulation, to predict performance, and rendering, to visualize how a product or structure will look. Rendering’s crystal ball helps answer design questions ranging from “Which of these materials should we use for the seat upholstery?” to “Does the color scheme of this housing support the maker’s brand styling?” to “How will this new housing project integrate with the surrounding historic neighborhood?”

While visual considerations may be an afterthought — or completely unnecessary — in some cases, in others they are an essential part of the success of the design. Appearances were a top priority in the creation of Radisson RED, an image-conscious brand of Carlson Rezidor Hotel Group billed as “a new hotel philosophy that connects with an ageless millennial mindset through art, music, and fashion.”

Soluis Group, an architecture visualization company based in Glasgow, Scotland, collaborated with Glasgow design studio Graven Images to create renderings of the first Radisson RED hotel for Carlson Rezidor. While Soluis has worked on Radisson projects for years, creating images and movies to help both internally, with exploration of concepts, and externally, with sales, the visualization team was usually tasked with adding a new element to an existing brand. “RED was a bit different — it was an entirely new brand,” noted Martin McDonnell, chairman of Soluis Group. The first Radisson RED opened in Brussels, Belgium, last year.

The Soluis team worked with hand-drawn sketches and conceptual design ideas from Graven, transforming them into realistic renderings of the Brussels hotel. Even in the age of digital conceptual design tools, many architects prefer to sketch with pens and pencils, McDonnell explained: “That’s the first expression of their intent.”

The Soluis team would bypass CAD in this process, going straight from the sketches into Autodesk 3ds Max. It was an unusual workflow, but also very efficient, said McDonnell. Even so, it was time-consuming: rendering could take three to six hours for a still image, and an entire weekend or longer for a movie.

The Game Is On

In 2010, Soluis implemented Unity Technologies’ Unity game-creation engine, which at $1,500 per year “was the first reasonably priced game engine,” McDonnell explained. The team moved to Epic Games' Unreal engine in 2014 when licensing prices dropped, and noticed an improvement in rendering quality, McDonnell said. “Unity was good, but Unreal is perfect, just gorgeous.” (Eligible enterprise customers can now use Unreal for free, or if needed, can subscribe to various levels of support packages or make a customized support package.)

“When we began using game engines, that opened up a whole host of opportunities for us and for our client,” McDonnell observed. “Now, with [Unreal], we can put [renderings] out almost instantly.”

All rendering takes place on local machines, executed by NVIDIA gaming cards that can do the work much faster than the Soluis render farm with its “racks and racks” of servers, McDonnell said. And he noted that the resulting renderings are very similar: “There is almost no quality difference … for most part, you struggle to tell the difference.”

Much of the time, the design review process is familiar: The Soluis team sends renderings to remotely located clients for approval; the clients mark them up and send them back. “That element hasn’t changed too much,” McDonnell said. ”But when can sit down with them live, you do see a dramatic shift.”

That’s thanks to the immediate feedback enabled by real-time visualization in Unreal. If the client wants to see how a room will look with a major change, such as new flooring materials or lighting, or a minor one, like moving a chair, they can — right away. There’s no need to hold off on minor adjustments or wait for long periods to compare various options. “[You can] end up with something much closer to their vision and intent,” McDonnell observed. 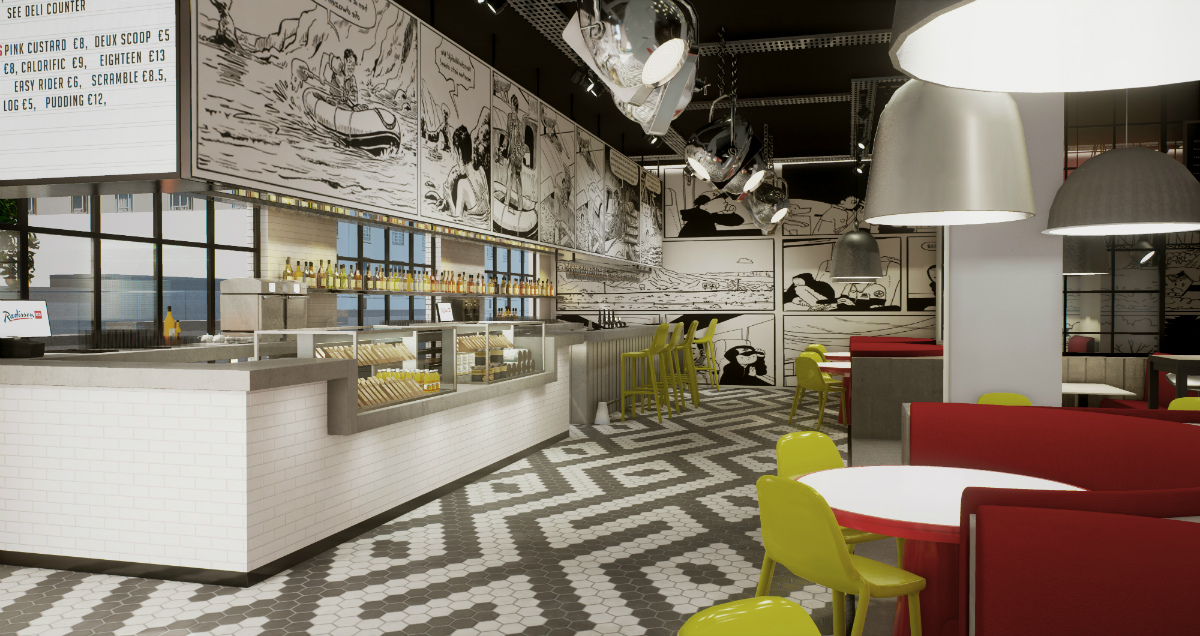 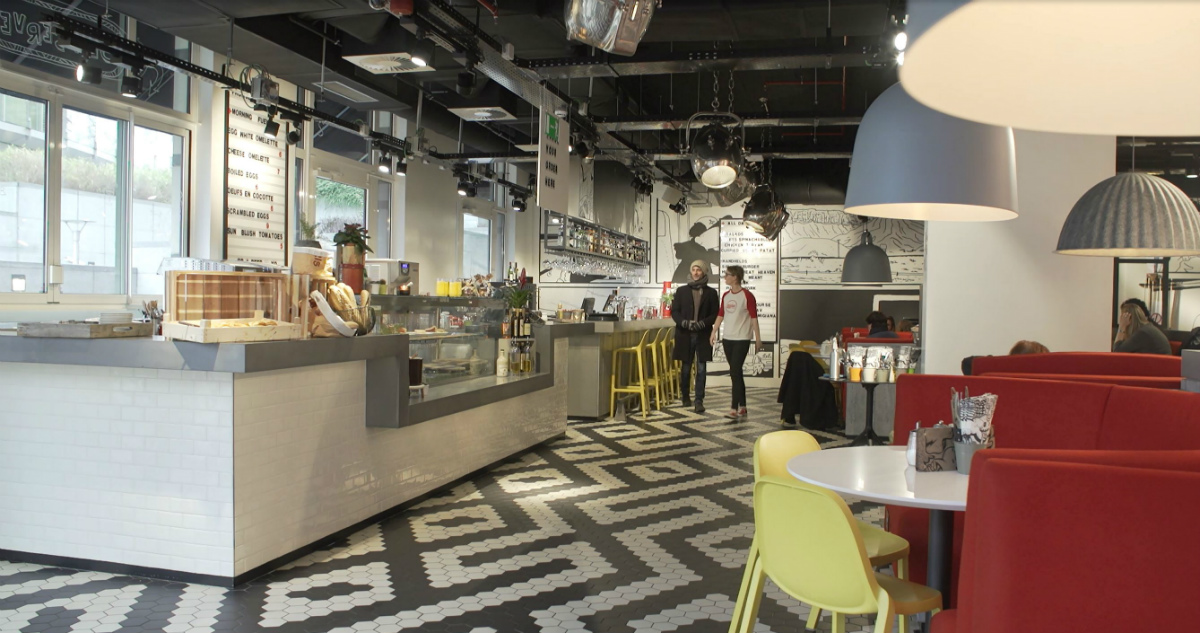 With real-time rendering enabled by the Unreal engine, designers were able to refine visualizations of the hotel cafe (top) and other areas to the extent that the completed project (above) looked very similar.

Augmented and virtual reality (AR and VR) can make viewing renderings a more immersive and realistic experience, and the Soluis team uses “anything and everything” available — from the Oculus Rift, HTC Vive, and Microsoft HoloLens to their own custom-designed immersive viewing solutions.

The Soluis team found that CAVE-type VR viewing environments, which project content onto three or more walls of a cube-shaped room, were too boxy for their liking. So they developed their own solution: an “immersive dome.” The hemispherical, concave, full-height viewer provides a 180 degree view, accommodates multiple people at once, and allows participants to see designs at full 1-to-1 scale. “It’s a way to use VR without the limitations of the headset,” McDonnell noted.

Users can navigate using voice commands, hand gestures, head tracking, game controllers, iPads, etc. “You’re able to enter that experience any way you like,” McDonnell explained. Plugins enable the dome environment to display any content created in Unreal or Unity. The company has created dome installations for multiple clients, and also has portable versions for use at conferences and other events.

McDonnell anticipates the next step of the technology, wherein the clients themselves can perform all the design changes they want to see, live, while using a VR solution. “That will change the face of design of all kinds,” he predicted.

But the latest technology doesn’t change the core of what Soluis does in creating visualizations. “The purpose and skill set remain the same — there are just new tools to enable it,” McDonnell said.