Rendering and VR Shape the Design Process at Woods Bagot

Virtual reality and interactive rendering, powered by Epic Games' Unreal Engine, Chaos Group's V-Ray, and NVIDIA’s Volta and RTX technologies, are vital in helping stakeholders inside and outside the architecture firm to see designs more clearly.


Visual communication products created through rendering play a powerful role in design, giving clients and other stakeholders a chance to view everything from major design decisions to the smallest details before they exist in the real world. There are various rendering setups available today, including local (desktop and mobile computers; on-premise GPU render farms) and remote choices (GPU cloud render farms). For Woods Bagot, an architecture firm with offices scattered around the globe, the local desktop has proven to be the ideal place for GPU power.

Tarran Kundi, associate principal and global leader of visual communications for Woods Bagot, explained the importance of rendering in an NVIDIA webinar held May 15: “We’re helping secure projects and opportunities, especially in markets where an image can be so emotive that it really sells the entire project narrative — this value is truly priceless.”

Kundi's VisComms group is part of Brand Studio, a creative agency integrated within Woods Bagot. “The notion of this integrated offering is, it’s really important to us to be able to continually craft an image from its initial concept, allowing it to really describe and tell the whole story of the design vision for our clients. By partnering with our colleagues internally, we’re really able to provide a deeper, resonating story of the design.”

With 17 offices — in San Francisco, London, Dubai, and beyond — Woods Bagot places a strong emphasis on intra-company connections. “At the very core of our business is internal collaboration,” said Kundi. This business model, however, does pose certain infrastructure challenges, he noted. As it’s not possible to have a dedicated render farm in each of the many locations, “we’re reliant on finding nifty and crafty ways to gain any production and computation value,” Kundi explained. “The exciting news is that on-premise, efficient, scalable computation is no longer a dream.”

The Power behind the Presentations

The VisComms team uses graphics hardware and software from NVIDIA and Chaos Group, “allowing us to effectively collaborate in real time with our global studio,” Kundi said. The NVIDIA GV100 graphics processing units (GPUs) are “the world’s fastest GPU for rendering,” according to Andrew Rink, AEC and manufacturing industries marketing strategy lead for NVIDIA. Each pair of these GPUs is housed in a HP Z8 workstation, which provides 128 GB of physical RAM — twice that of the shared pool of 64 GB of GPU RAM. “This is really important to have a balanced system,” asserted Kundi.

The two GV100 GPUs are joined with NVLink, NVIDIA’s high-speed GPU interconnect technology. “They work so well, they feel like a single graphics card or single computation bank,” Kundi reported. The system is able to handle even the company’s largest data sets with ease, he said, because the GPUs can be used “in a computation manner or as a regular workstation”; the NVIDIA System Management Interface (NVIDIA-smi) utility enables users to switch between these two different modes with a system reboot.

“Each artist is essentially given a supercomputer, and the ability to offload GPU processing locally; importantly, that minimizes local network traffic,” Kundi observed. “Often we’ve found that really relying on [distributed bucket rendering] slows down a lot of our core network speed, and the residual heat and maintenance often required for CPU farms becomes really difficult to manage … What’s really cool though is these cards are highly scalable, and really [have little impact on] our existing infrastructure.”

A Workflow for Wow

Kundi used rendered images of the Chongqing Tall Tower project in China as an example to demonstrate the VisComms team’s workflows. “These were crafted as part of the design process, and ultimately became presentation imagery to our client at the final presentation. Key to this is taking data from our project teams — often this workflow begins with Rhino or Revit data translation.” Chaos Group’s photorealistic render engine V-ray, used as a plugin within Rhino or Revit, is “the backbone of our visualization process,” Kundi said.

The team turns “all polysurface blocks all into a set of simple surfaces, removing anything unnecessary like splines, points.” Once the data has been brought into 3ds Max, the team can begin refining the image with the NVIDIA OptiX artificial intelligence–accelerated denoiser, which is based on NVIDIA's RTX ray-tracing technology; apply basic materials; and iterate different environments and times of day. “We’re instantly being able to see results because of the fast Tensor Cores [in the GV100 GPU] … this makes the use of the OptiX denoiser much, much more interactive. We’re able to make changes on the fly, and able to make rational decisions as a result,” Kundi reported.

Working in the OptiX Denoiser (above), designers are able to see the results of any changes they make right away, leading to better choices about how to craft the final renderings (below). All images courtesy of Woods Bagot. 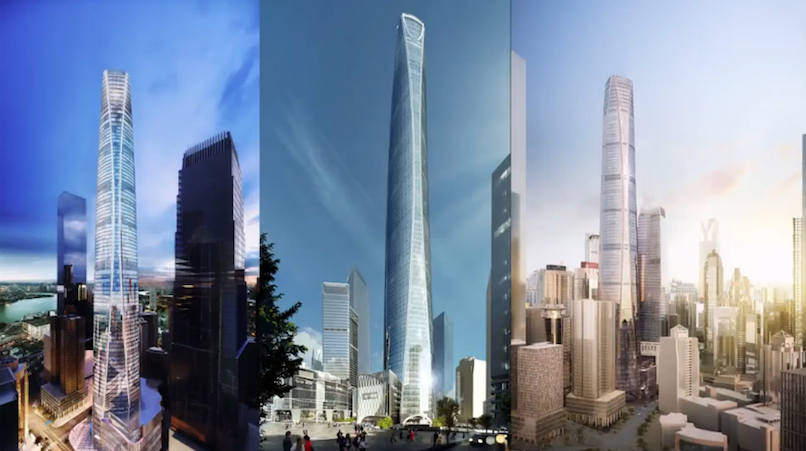 “The performance and stability these cards give is very, very incredible, particularly in handling this large model interactively with the buffer open all the time, continuously rendering in the background.” Even with a full 6K-resolution image, the interactive response is speedy, according to Kundi, and it means users can “have an accurate depiction of what a particular reflection or tone of environment is going to cause to glazing, in this case,” indicating a section of the Chongqing tower.

Kundi was also enthusiastic about the realization of “lunch time” production renders: “This is something which was unimaginable years ago, especially without a dedicated render farm for each user, or at least silo slots of a render farm,” he said. In this higher-speed environment, the team no longer has to save 6K images to be rendered overnight or during the weekend.

“Visual communication supports the ideation of design, but also leverages our expertise to develop crafted presentation imagery at the same time. … better design decisions are highly valuable, and even more so from more accurate imagery — which everyone demands. Ultimately, the minute you show a high-quality presentation image, everyone wants that, regardless of whether they have two weeks or two hours.”

Over the past 18 months that it has been working with the GV100 GPUs, the VisComms team has expanded beyond creating digital still images to immersive film and virtual reality (VR) experiences. “Ultimately, what’s really, really exciting for us is utilizing the most advanced GPUs in a kind of new field,” Kundi enthused. “It really has given us the ability to tell a much deeper story about a project, provide much wider usage of deliverables: We’re creating VR films utilizing the same models, the same materials.”

The team works with the Unreal Engine from Epic Games to produce VR experiences and short films. “We leverage both V-ray as an exchange platform for materials and cameras and such, but also the Datasmith tool developed by Epic Games, which is incredible,” Kundi noted.

“This notion [that VR can provide a deeper experience of a project] extends … into the way we are analyzing our designs as a business,” he said. “Within some of our offices, we have this live design review [VR] suite, which lives in a really integral part of the studio and allows our design teams to really explore and scrutinize design details.” 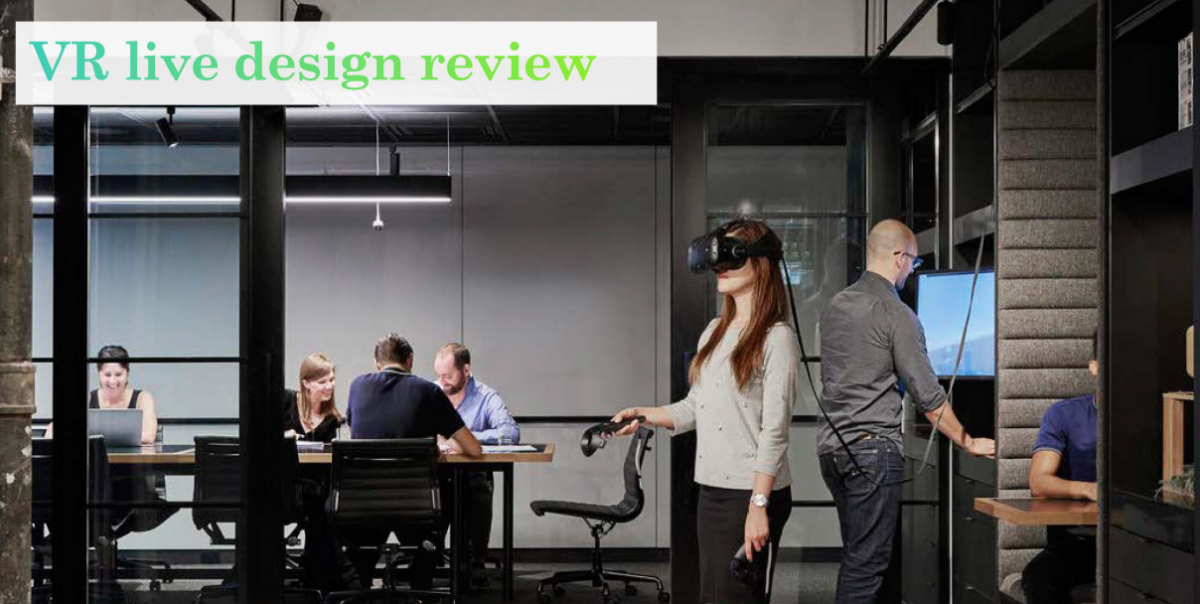 Woods Bagot's VisComms team uses virtual reality not only to communicate ideas to clients, but also to help its own designers explore and evaluate works in progress.

Clearly, Kundi is a strong proponent of the use of visualizations for design development, as well as client review: He spoke of "the excitement of being able to use a tool to creatively test and iterate through design options and images that can really help craft what the final product should become. ... We digitally craft our design thinking — and dynamically develop, through the use of imagery and film, our design ideas."