Editor’s note: The related article on IrisVR is available here.

Lots of designs look good on paper — or on screen, as the case may be. But envisioning how a new product or new piece of infrastructure will actually appear in the real world is a challenge that’s spawned a host of visualization approaches over the years. Each of these has its own limitations: Rendered images, for example, can portray designs with accurate lighting and in photorealistic detail, but show only one fixed perspective at a time. Physical prototypes created with 3D printing can closely emulate some products, but cannot create parts larger than the build size of the printer, and can only represent buildings and landscapes in miniature.

Virtual reality (VR) design visualization technologies hold particular appeal for AEC professionals, who have long looked for a way to put architects, owners, and other stakeholders “inside” designs — but they have limitations as well. Fully immersive VR enables users to explore their surroundings as in a video game, moving through a full-size digital model of a revamped penthouse or proposed shopping mall as if they were really there. Providing that type of interactive visualization, however, requires an investment in hardware, such as dedicated head-mounted displays (HMDs) and the computers that power them, as well as the software and expertise needed to create VR experiences from design files. In addition, all users must either be in the same physical location in order to use shared hardware, or have their own hardware setup.

Another VR option relies on smartphones and lightweight, inexpensive viewers instead of powerful computers and HMDs. Typically made of cardboard or plastic, viewers based on the Google Cardboard platform often incorporate a magnifying lens for each eye, a holder or slot for the user’s phone, and sidewalls to block peripheral vision and outside light. They're also inexpensive to purchase, or those inclined toward DIY projects can build their own. As Google states, the goal is to help users “experience virtual reality in a simple, fun, and affordable way.” Ubiquitous access is likely of greater importance to AEC professionals than fun; such a setup enables widely scattered team members and stakeholders to gain a more realistic sense of designs for various spaces, with no expensive equipment or travel required.

To address both scenarios, IrisVR launched two software solutions recently: Prospect desktop software, which creates navigable VR experiences for users who have access to dedicated VR hardware, and the Scope mobile app for use with smartphones and Cardboard-type viewers. Available for iOS and Android devices, Scope turns panoramas of designs into 360-degree VR experiences. It works with panoramas that have been rendered in V-Ray, Lumion, Autodesk A360, and other applications. 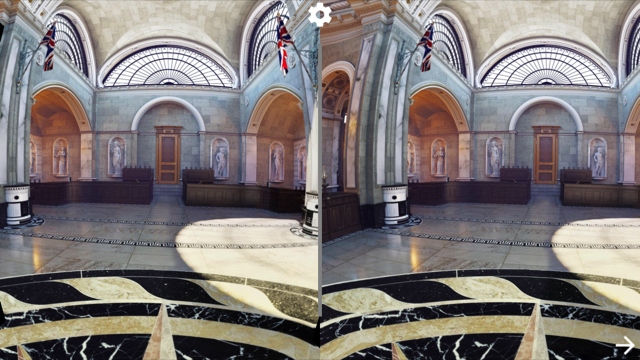 Scope processes rendered panoramas into twinned imagery, so that each eye has its own perspective. When the panorama is displayed in a Cardboard-type viewer, this results in a 3D effect that helps users feel that they are standing inside the rendered room. A button on the viewer activates the gear icon pictured at top, enabling the user to select different panoramas while the app is in use.


Users can turn in place and look all around themselves, including up at the ceiling and down at the floor; the app tracks the user’s head movements, and updates the view accordingly. Unlike Prospect experiences, Scope visualizations are not fully navigable; the user cannot move through the space, walk into other rooms, etc. Users can present more than one room or space, however, by assembling a portfolio of individual panoramas (a “panoset”). 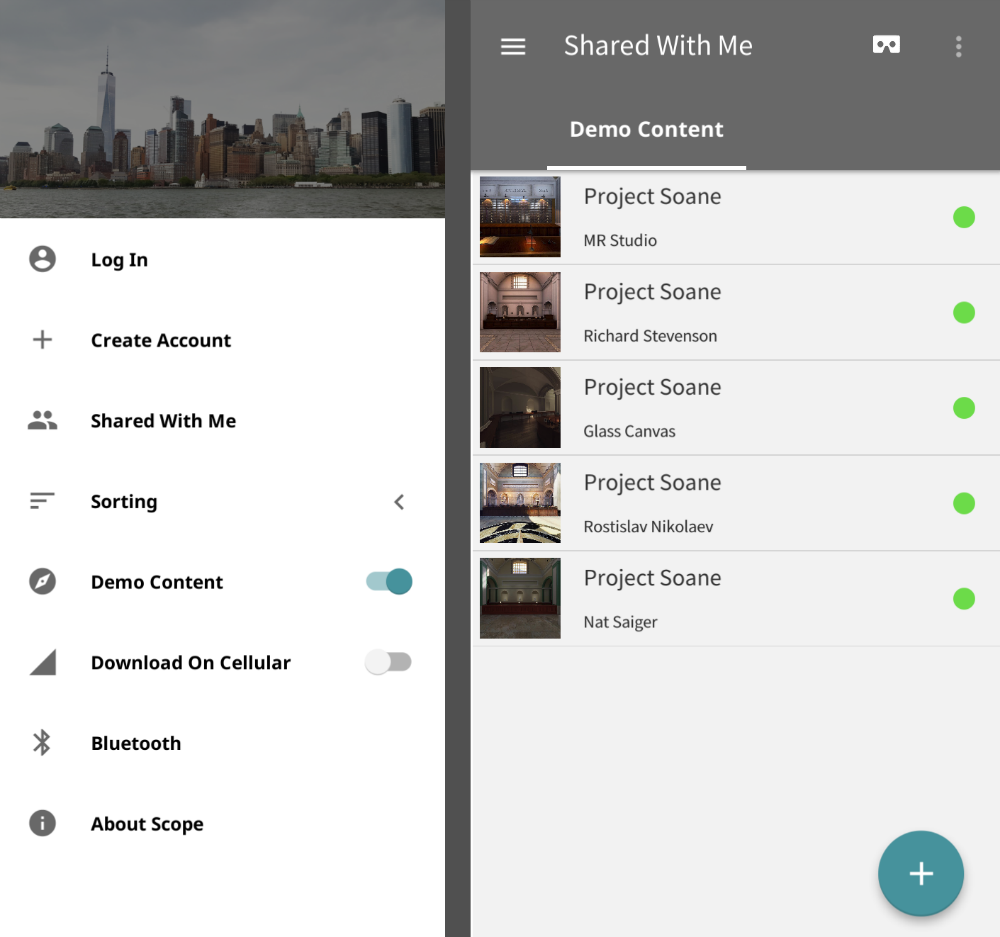 Once panorama visualizations have been added to the Scope Library, they can be shared with other Scope users (above left) via a code. Demo content included with Scope (above right) comprises five spaces from Project Soane, a Revit reconstruction of Sir John Soane’s Bank of England, destroyed nearly a century ago. Each of the five was created from a panorama rendered in V-Ray.


Although it might be frustrating, especially to users who are accustomed to freely moving through the digital landscape when playing video games, the limitation on movement in the Scope panoramas does have a benefit. Because users do not feel as if they are moving, but are simply pivoting while fixed in place, stationary panorama viewing is less likely to cause nausea or other symptoms that sometimes cast a pall over VR experiences. Users of smartphone-based viewers can also run afoul of these issues if the smartphone’s processing power is not up to the task of displaying a VR experience, and the view skips or lags instead of panning smoothly in sync with the user’s head movements. To help deliver as smooth a viewing experience as possible, Scope runs at a rate of 60 frames per second.

When I tried the app (on both iOS- and Android-based phones), I did not experience any lagging or any discomfort, except when I strained to focus without glasses. (You can use the viewer while wearing glasses, but the increased distance between your eyes and the screen, and the greater amount of outside light entering at the edges of the viewer, diminish the immersive quality of the experience.) The image does blur a bit when you move your head quickly, but it never felt unnatural or disorienting to me.

Viewing the screen pixels at such close range and under magnification can result in a slightly gridded appearance, as if you are viewing the world through a fine-mesh screen door. Apart from that, it feels very much as if you are standing in the room represented, looking around as you would in real life. Even simple VR experiences can effectively and immediately provide a sense of scale and proportion — elements that are crucial to every architectural project, but sometimes difficult to communicate through 2D materials or scale models. With a minimal investment (Scope is free for the Basic version, or $40 per user per month for the Pro version) and a Cardboard viewer (starting at less than $10), AEC professionals can realistically convey the "feel" of a project design to anyone with a smartphone.