What a Difference a D Makes

When it comes to conveying the vision of a building design, Selser Schaefer Architects found that 3D can succeed where 2D fails.


Bringing a building design to fruition requires investing long hours, planning countless details, and — most importantly — securing client approval. Before the stakeholders will give their okay, however, they must be convinced that the design meets their needs, both practical and aesthetic. This is the part of the process when architects must become fortune-tellers, conjuring a compelling vision of the building-to-be. But what happens when architect and client gaze into the same crystal ball and see two different images?

That's what occurred when representatives from Oklahoma's Selser Schaefer Architects presented their design for the Tulsa Community College Center for Creativity to an executive committee. The Selser Schaefer team relied on various 2D architectural drawings to convey the design: the site layout, floor plans, a typical building section, and four exterior elevations. The linework for these drawings was extracted from the schematic-level BIM (building information modeling) model the team had created in Bentley Architecture, with Adobe Photoshop used to add shadows, colors, textures, and annotations. 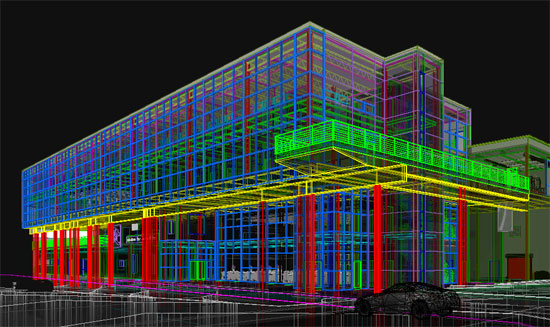 An exterior view of the Center for Creativity BIM model created in Bentley Architecture.

Unfortunately, the 2D presentation fell flat. "[The clients] understood that the solution we were presenting was meeting the needs they [had specified] but ... we could tell that they weren't quite getting the whole story of the design," said Shannon West, an architectural intern at Selser Schaefer.

Part of the communication problem stemmed from the complexity of the four-story building, which had to accommodate many different uses, including events, distance learning, radio broadcasting, and media production. It was also crucial to the college's goal of creating a downtown campus — and the city's efforts to redevelop downtown Tulsa — that the building reach out to its surroundings, offering both literal and figurative transparency and fostering a spirit of collaboration.

Brian Thomas, associate project manager at the firm, explained that the committee members, including college administrators and future users of the Center for Creativity, weren't able to visualize themselves in the building. Through the questions they asked, it became apparent that they didn't fully comprehend the value, for example, of multipurpose patio spaces that the architects designed to integrate the building with the street. This scenario can put the architects’ vision at risk, according to Thomas, "because there is always the potential when [a client doesn’t] understand something for them to say, 'Why don't we not do it.'"

Although the design wasn't met with outright negativity, the Selser Schaefer team quickly realized that their project might not move forward as planned without better support from the client. The architects knew they needed a more effective tool to communicate their vision. The team devoted another 80 hours to preparing 3D renderings of the building, using the visualization capabilities of Bentley Architecture to create nine interior and exterior views. To heighten realism and help convey the experience of being inside the building, additional details such as site context, window and flooring patterns, and interior finishes were added to the existing BIM model.

After 2D representations failed to fully convey the complexities of the design, the Selser Schaefer team created 3D renderings of the proposed building.

The designers developed material libraries and created custom rich photorealistic content (RPC) of a decorative bamboo planting, used in addition to stock RPC elements such as people, cars, and trees. A common sky image was used in all the exterior views to create consistency.

Ray tracing was used, explained West, with a single-source solar light on exterior views and a combination of solar and ambient light on interior views, with additional point lights added as needed. After the images were rendered on a quad-processor PC workstation, Adobe Photoshop was used to add context elements such as background photos, people, and projection screen images. Photographs of the neighborhood surrounding the building site were carefully matched with corresponding views in the renderings to provide realistic exterior backgrounds.

Less than two weeks later, the designers and stakeholders met again. This time, the presentation was met with enthusiastic applause. The design had not changed — only the communication tool had changed. "[The 3D images] helped the clients understand how much the building reached out to the surrounding community, to the streets," said West, fulfilling that key vision of the project.

The clients could more clearly envision the ambiance in various building spaces when presented with 3D renderings instead of floorplans and elevations.

Although preparing the second set of images forced the firm to make some decisions (such as choosing building materials) earlier than it normally would, and used up time that could have been spent moving the project forward, the investment paid off: The client readily accepted the design without changes. "If pictures are worth a thousand words," said Thomas, "a 3D image might be worth a million."

Despite the resounding success they experienced in that second design review, Selser Schaefer hasn't made 3D the default option for client communication, said Thomas. "It really varies from client to client," he explained. Looking to the future, he expressed excitement about the opportunities 3D printers will provide for both internal and external communication. Referring to the tangible 3D models that can be "printed" directly from BIM models, he said, "For a really economical price, you can offer something up for your client, as well as your team."

The Center for Creativity was completed in July 2009, after a year and a half of construction, and was recognized with an award from the local chapter of AIA (American Institute of Architects). Thomas and West shared this experience in a presentation titled "Visualizing Creativity" at the 2009 Bentley Systems Be Inspired: Best Practices Symposium and Awards, held in October 2009. Selser Schaefer Architects was a finalist for the Be Inspired award for Communicating through Visualization.

The 3D renderings prepared for the second design review (left) proved to be very accurate indicators of how the building would look upon completion (right).