Graebert neXt 2020, Part 1: During a difficult year for many businesses, Graebert saw substantial growth — stemming in part from ex-AutoCAD users turned off by Autodesk’s evolving software licensing policies.


Graebert is a Berlin-based CAD developer whose products operate both in plain sight and below the radar: The company’s software is sold under Graebert’s ARES brand and is also licensed by other software vendors to power applications such as Dassault Systemès DraftSight and PTC Onshape. Together, these various avenues for Graebert’s technology to reach users enable the relatively small company to claim the second-largest installed base for DWG-based CAD software after AutoCAD.

Although the damage the COVID-19 pandemic wrought on supply chains, customer demand, and other essential business components pummeled many companies this year, Graebert thrived. “Unlike most of our competitors, our company is not owned by investors ... we create value for our customers and partners, not for the stock exchange,” said CEO and founder Wilfried Graebert during this year’s online-only Graebert neXt conference. “Despite corona, we keep this year hiring strongly,” he said, increasing the company size by some 30% in 2020.

According to the Graebert team, one factor behind the company’s growth is dissatisfaction stemming from Autodesk’s licensing changes in recent years. “Autodesk is driving customers to us just by their policies,” Wilfried Graebert told Cadalyst. “Right now, the named-user account is really causing an uproar in the enterprise community. [That change can] double the budget sometimes, and this is not a good time for that.”

Cédric Desbordes, Graebert’s business development and marketing director, explained that because there are often four to eight employees using each network license, transferring them all to named-user licenses incurs a cost increase that “is just not possible” for many companies to absorb. That makes the current moment a “very pragmatic” time for AutoCAD users to switch to a new solution, he believes.

Angling for Architects Angry with Autodesk

A notable example of such a switch is the Indian Institute of Architects (IIA), which recently partnered with Graebert to bring its 20,000 members an in-house software solution for their basic drawing needs. The new IIACAD comprises all the 2D and 3D CAD features available in ARES Commander for Windows and macOS, including new features for working with BIM drawings, and is sold under a perpetual license. 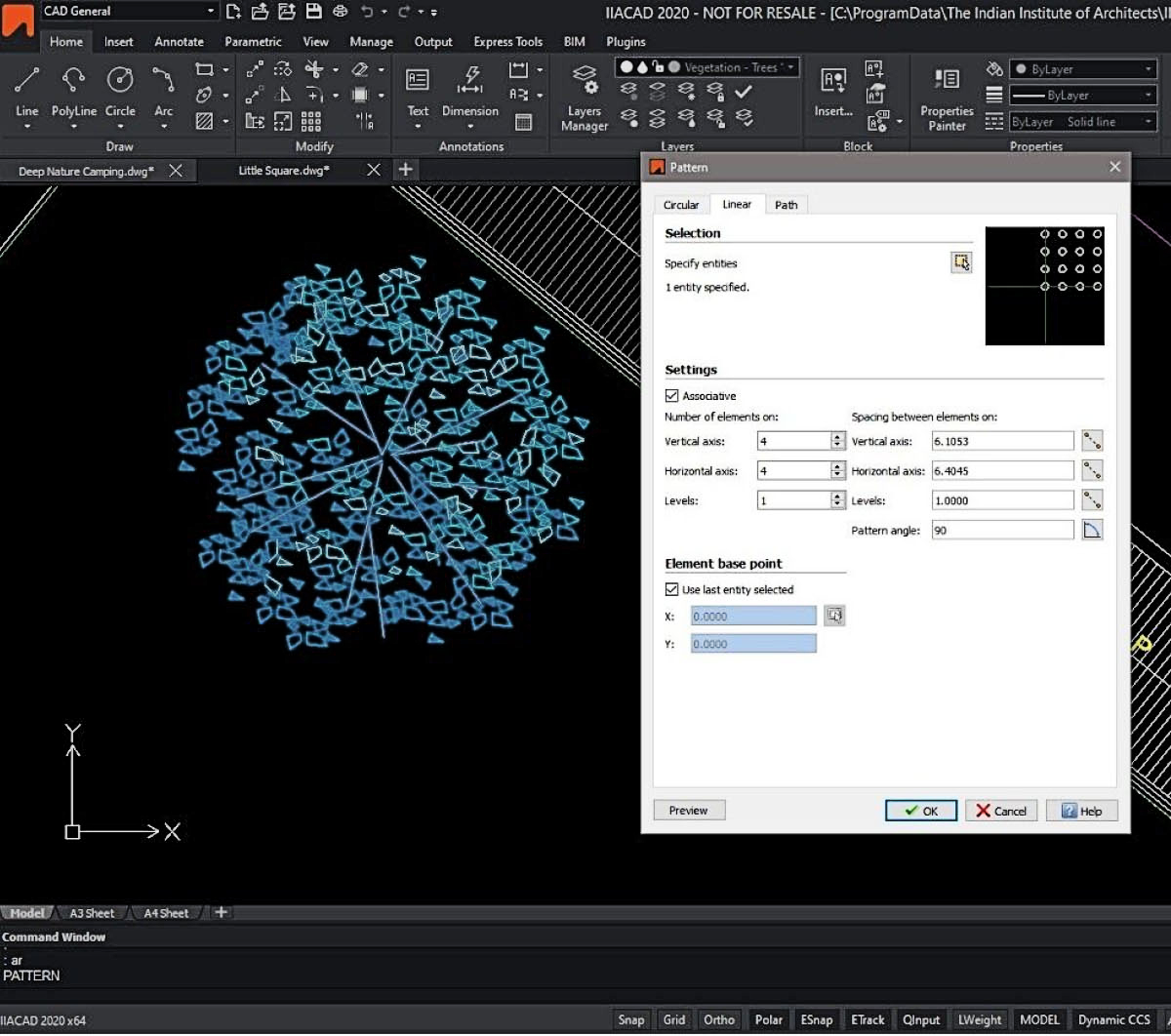 Detail from a screenshot of IIACAD, a custom solution based on ARES Commander.

The IIA introduced its own solution after members raised objections related to software audits and subscription licensing issues when using Autodesk software. “They were treated like delinquents ... they just came to a situation where they said ‘Enough,’” Wilfried Graebert said. “You could feel they were really upset.”

Wilfried Graebert also credited a perceived lack of development for some Autodesk customers transitioning away from AutoCAD. “It’s not like [Autodesk releases] every year something dramatically new, like in the old days,” he commented. Graebert, in contrast, has “a lot on top to offer besides the main functionality of AutoCAD,” he said. According to Desbordes, “Making a clone is not enough; we want to differentiate with unique, cutting-edge technologies.”

Smoothing the On-Ramp for Defectors and Newbies

Graebert strives to provide an easy transition for those ex-Autodesk customers migrating from AutoCAD, and taps the members of its workforce that come from an AutoCAD background for specific feedback on that process, Desbordes said.

The Graebert team also created a new workspace designed to assist people making the transition, Desbordes said. In versions previous to 2020, ARES Commander provided two workspaces: “Drafting and Annotation,” for 2D work, and one for 3D. Version 2020 added a second 2D workspace. “The new ‘CAD General’ workspace may look more familiar to you if you learned CAD on other programs such as AutoCAD. In other words, it makes it easier to switch to ARES Commander,” stated a Graebert blog post. “It means people can test it more easily themselves ... it’s a very easy first step for beginners,” Wilfried Graebert said. 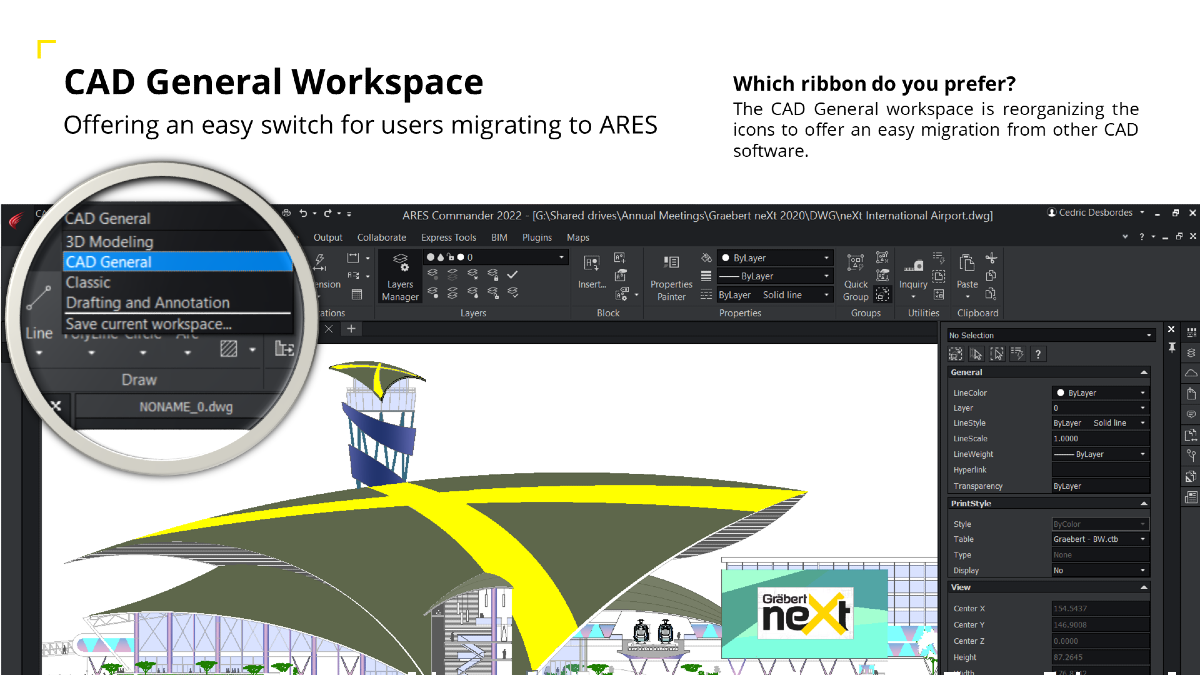 But experienced CAD users are not the only customers that need special consideration. In the Asia–Pacific (APAC) region, for example, many employees of CAD-using companies have little experience with or training in CAD; they may know how to perform a specific task, such as changing colors, but not understand how to use layers or blocks, Desbordes explained. “We try to put ourselves in the shoes of these people as well,” he said. Feedback from users and resellers in those regions helps the development team make the product adoption experience more accessible to users of all experience levels.

Editor's note: Click here to read Part 2 of this article, "Graebert Seeks to Smooth the Workflow Between 2D CAD and BIM."