Ads help support our ability to provide you all our articles and papers at no cost to you. Thank you for your consideration and support.
CAE

‘Revolution In Simulation’ Initiative Builds a Community Dedicated to Democratization

Experts, non-experts, companies, associations, and volunteers are coming together to create a public resource portal that supports advanced simulation across product development teams.


Democratization is a word that’s often used casually in the design technology world — in discussing a product that’s offered at a lower price than in the past, or one that’s simpler to operate than its predecessor. Malcolm Panthaki, however, has a vision for democratization that goes far beyond “cheaper and easier.” Panthaki is the cofounder and managing director of Revolution In Simulation, an initiative and online portal dedicated to making advanced simulation safely accessible to everyone who needs it — including designers, junior engineers, and even salespeople. As the Revolution in Simulation site states, “Democratized Simulation makes analysis more powerful and capable for CAE [computer-aided engineering] experts while accessible, safe, and reliable for non-experts.”

Equipping more team members with the power of simulation is essential in the current high-speed product development environment, Panthaki believes. When non-experts can effectively analyze designs, the product iteration cycle can move more quickly, and more iterations can be evaluated, he explained.

The Revolution In Simulation team is careful to explain, however, that this initiative is not seeking to eliminate the role of simulation experts. “We’re in no way diminishing the role of those experts,” stressed Robert Farrell, Jr., founder of Farrell MarCom Services and a member of the Revolution in Simulation Executive Operating Committee. Panthaki concurred: “These experts are absolutely critical to the process and … they continue to be essential.” And while some experts surely feel threatened by democratization efforts, “the ones that truly are comfortable in their expertise jump on this [initiative] as an opportunity to truly shine,” Panthaki continued. “They feel this really leverages simulation better within their organizations.”

Lipstick on a Pig

Panthaki began his career as a CAE software engineer, and became interested in simulation early on. But rather than the physics calculations, he was more intrigued by “how we could make these powerful tools and technologies more accessible,” he told Cadalyst. “Everything, including software, is merely a tool — it isn’t an end unto itself.” Unfortunately, these tools are very hard to use, Panthaki found. And although interface improvements have been made over the years, it’s largely “lipstick on a pig”: Developers have made their products easier for experts to use, but a great deal of effort and finesse is still necessary to achieve robust and accurate results, he said. “You can easily get garbage out of them,” Panthaki warned.

Another problem, as Panthaki sees it, is that siloing of tools — and experts — is still common. “Not only are these tools extremely difficult to use, they’re also islands unto themselves,” he observed.

The Path to a Portal

Around the same time, Panthaki began speaking at conferences, promoting his vision of simulation for all — and getting “absolutely no response, from users or vendors.” He persisted, however, thanks to “a combination of conviction and lunacy,” he said with a laugh.

After years of effort, that persistence paid off, and in May 2018, the Revolution In Simulation web portal was launched, bringing together simulation experts, end users, and solution providers in a community dedicated to sharing knowledge and solutions. Unlike most existing simulation resources, the portal is focused on vendor-agnostic information — “Revolution in Simulation is not yet another forum to market products and services,” stated a press release from the launch.

The portal is ambitious in scope, encompassing resources ranging from news, case studies, white papers, and webinars to best practices and other reference materials. It promotes interaction and collaboration among site visitors and subject matter experts, as well as industry organizations, special-interest discussion groups, and software and consulting service providers. The list of sponsors, which continues to grow, includes such names as NAFEMS — “the only worldwide independent association dedicated to engineering simulation” — and engineering software companies ANSYS and ESTECO, as well as Aras. 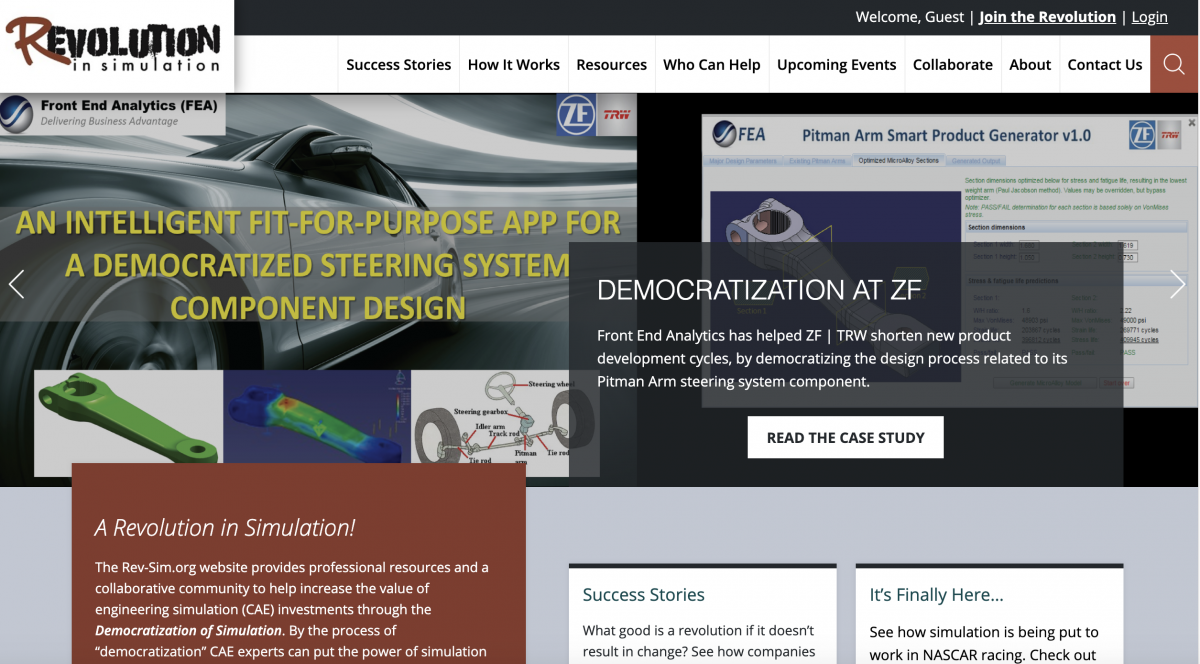 Now that the human and technological infrastructure of the online portal is established, the Revolution In Simulation team can focus their efforts on expanding their reach — and their usefulness — to the broader community. Robert Farrell, Jr., notes that although the site gets “lots of interest” already, he’d like to see more repeat visitors. He also wants to get those visitors more involved with the site moderators, so they can take fuller advantage of the expertise available.

In the coming year, the team will keep working to bring in more contributors and collaborators, and to make the portal “a lively, active community that people want to come to in order to get information and share information,” Panthaki said.