Robots are Coming to a Construction Site Near You! 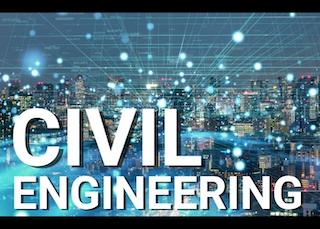 What was once considered science fiction is becoming reality at construction sites around the world. Robots and other autonomous equipment are performing a wide variety of tasks in virtually all phases of construction—from collecting survey data to distributing materials and performing demolition, installation, and inspection.

Equipped with cameras, sensors, robotic arms, and other features, robots of all shapes and sizes are performing tasks that humans would rather avoid. The robots are performing repetitive and sometimes dangerous work—often guided by CAD and BIM data. With the construction industry facing a labor shortage, the new tools are helping AEC firms keep up with mounting workloads.

As one of the first stages in many construction projects, surveying and data collection has relied on automation for years, as surveying equipment has become more automated and enabled one-person survey crews to complete work that once required three or more people. Robotic total stations and other equipment from Leica, Trimble, and other manufacturers can automatically lock onto moving targets, adapt to weather and other site conditions, and complete other tasks that previously required multiple people.

FieldPrinter’s developers designed the system to be a “drop-in replacement” for manual processes with minimal changes to construction workflows, said Tessa Lau, founder and CEO of Dusty Robotics. “We take artifacts that design teams are already producing and bring them out into the field.” In some cases, the CAD or BIM data must be boiled down or tweaked slightly to print just essential information, such as interior wall locations instead of exterior limits. “What designers put in the model is not always what people in the field want to see,” noted Lau, adding that Dusty Robotics staff often helps customers with the data distillation process. 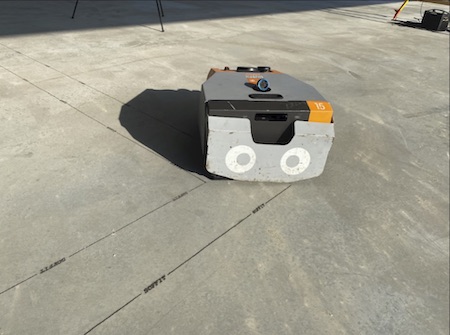 For exterior projects on irregular surfaces, some AEC firms are using Civ Dot From Civ Robotics to lay out roads, parking lots, and other projects. U.S. contractor Mortenson has used Civ Dot to lay out solar energy facilities, which often require locating thousands of steel piles to support solar equipment, said Trent Mostaert, vice president of industrialization at Mortenson. The system accepts data in CSV or DXF format and spray-paints locations with dots or dashed lines. A plug-in is available for Trimble users to integrate data from Trimble equipment. 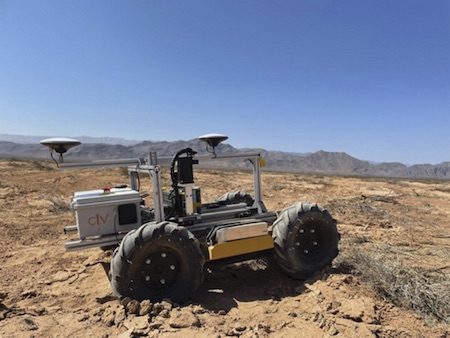 Robotic equipment is also being used to transport construction materials around job sites. Mortenson announced in September a partnership with Orteco, an Italian-based manufacturer, to develop robotic equipment that autonomously distributes piles across solar farms and other large-scale sites. The GPS-enabled pile-distribution system, which was recently used on a solar project in West Texas, allows the contractor to redirect its workforce to other critical tasks while expediting the completion of the initial phases of a solar energy project.

The machine can free up to 80% of the craft workforce traditionally required to mark pile distribution points across a utility-scale solar site and deliver piles to each location, according to Mortenson. As the project workforce focuses on subsequent tasks, the pile-distribution system, which holds up to 100 steel piles at a time, can begin to place piles in precise positions in preparation for the pile driving process. “Our goal isn’t to reduce labor,” said Mostaert. “The real goal is to accelerate how quickly we build solar projects. We want to get more out of the labor we have.” 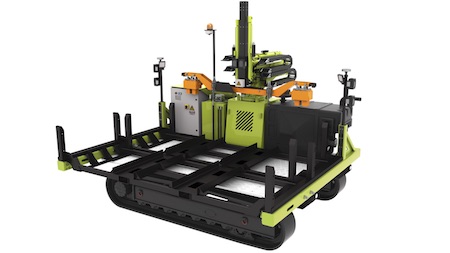 A GPS-enabled pile-distribution system developed by Orteco and Mortenson can hold up to 100 piles at a time and place piles in precise positions for pile driving. Image source: Mortenson. Click image to enlarge.

Once the piles are distributed to their correct locations, Mortenson also uses automation in the pile-driving process, with GPS-enabled pile-driving machines from Vermeer. The process uses GPS to monitor pile installation and requires approximately 50% of the workforce used in traditional pile driving methods, according to Mostaert. When used together, the autonomous pile-distribution system and semi-automated pile driving machines help reduce cost and risk of injuries, freeing workers for other tasks, he said. “Smartly deploying our available workforce on the right aspects of a project and utilizing industry-leading technology to improve safety and performance in other areas makes this a reality.”

For both pile distribution and pile driving, Mortenson feeds location data to the equipment in CSV format, typically imported from topographic surveys and CAD files. Pile driving requires more detail, such as elevation, plumbness, and tilt.

GPS-enabled pile-driving can be done with fewer workers, freeing workers for other tasks. Image source: Mortenson. Click image to enlarge.

Robotic equipment is also becoming more common in excavation. Black & Veatch, a U.S.-based engineering, procurement, and construction company, has used Built Robotics’ Exosystem to perform trenching on solar facilities and other projects. When exploring ways to introduce robotics, Black & Veatch found trenching on solar projects “a really good fit because it happens away from critical work,” said Tyler Parker, construction tools and technology manager at Black & Veatch. “It showed itself to be a low risk, high reward in terms of a knowledge-building opportunity.”

Black & Veatch partnered with Built Robotics to introduce robotic trenching on select job sites, starting with 1,000-foot trench lengths and progressing to 5,000-foot trenches, then implementing the technology in full on a project earlier this year. “The robot did exactly what it was designed to do,” said Parker. “It was very successful.”

The Built Robotics system uses design data from CAD drawings or survey points, along with operator input, to establish start points, end points, and key trench dimensions. As trenching progresses, the system also compiles real-time as-built data, such as trench length, width, and location, said Ahmed. Based on design data, the system establishes a geofence, a virtual barrier that informs the machine of boundaries within which it must work. The geofence is one part of an eight-layer safety system that also includes physical barriers, safety lights, warning signage, wireless and hard-wired emergency stops, audible warnings, and obstacle-detection cameras. 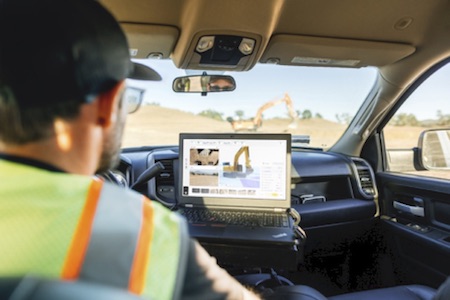 Robots are also finding their way into a host of other construction applications. Spot, a four-legged robot from Boston Dynamics, has been used to gather site data and monitor field conditions, venturing into areas difficult or dangerous for humans to navigate. Construction Robotics offers SAM (Semi-Automated Mason) for bricklaying and MULE (Material Unit Lift Enhancer) for handling heavy material on construction sites. 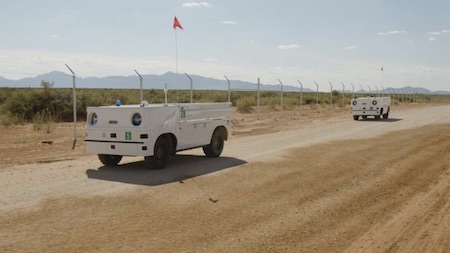 Other robotic systems are in various stages of deployment to perform repetitive tasks, such as painting (PictoBot), drywall finishing (Canvas), tying rebar (TyBOT), welding, and inspection. Robotic solutions are being explored for performing in-wall inspections, overhead inspections, and other quality-control-related work, but are still in early stages, according to Rob Leicht, a Penn State University associate professor of architectural engineering who has led research on industrialized and robotic construction sites (IRoCS).

While progression of construction robotics from laboratory testing to job sites is encouraging, several roadblocks stand in the way of future adoption, said Leicht. When compared with other industries such as manufacturing, the construction industry is fragmented, with vertical and horizontal silos that limit collaboration on new concepts, he noted. The competitive nature of construction, with predominately low-bid procurement, also limits many AEC firms in funding research and exploring creative concepts. He sees alternative procurement approaches, such as design-build and integrated project delivery, offering more opportunities for designers and builders to collaborate and try new techniques.

Leicht also noted that many of the firms potentially benefiting from robotics are smaller trade contractors hesitant to make the six-figure investments needed to purchase a construction robot. “That’s a big ask for a small firm when most of the machines are still relatively new and untried,” he said, noting that robots could become more affordable as they become more common.

Improvements are also needed in transmitting design information to construction. “We still work off a very paper-based orientation,” Leicht said. “It’s getting better, but it’s far from settled into a digital handoff.” And, even when digital models are developed, the level of detail is not always sufficient for driving robots, added Leicht. Parametric tools used in conjunction with CAD and BIM may offer opportunities to improve information flow and level of detail.

As part of the industry’s digitalization, the concept of voxels may become more common in modeling behavior of 3D objects. Much like pixels are used to depict the smallest addressable element in a 2D raster image, voxels are volume elements representing 3D elements. When a robot or other process captures images related to construction progress, voxels can be used to display constructed elements and compare the occupied 3D space with that of the design model.

While robots have proven productive in automating repetitive tasks, construction will always need human involvement to handle the myriad of project-specific demands. The scenario of robots replacing humans in construction is highly unlikely. Rather, AEC firms may be relying more on robots to keep up with rising workloads and free up workers for more important tasks.

Equipment developers and industry practitioners will also need to collaborate closely to find practical solutions that are safe, dependable, and economically viable. Lessons learned by the developers of self-driving vehicles, smart roads, and other technologies may prove helpful in finding the optimum balance of human intervention and autonomous operation. In an industry  often averse to risk, construction professionals will want to see proof of success before wide-spread adoption of robotics in the field.