This portfolio includes the NX 2D and 3D CAD solution for design, simulation, and manufacturing, which has been upgraded with a new tool for 2D sketching in CAD, aptly named Sketch. The new tool features the “industry’s first artificial intelligence–powered CAD sketching technology,” according to a company press release. Siemens claims that Sketch “the first in the industry to eliminate upfront constraints on the design”; rather than defining constraints such as size or relationships, NX can reportedly recognize tangents and other design relationships to adjust on the fly.

Brenda Discher, senior vice president of strategy and marketing for Siemens Digital Industries Software, clarified during the conferencde that Sketch is a brand-new tool, unrelated to the Catchbook drawing tool released several years ago. “It’s based on some predictive AI smart technology that we developed that looks at what you select ... how you go along and add constraints, and it pays attention to what’s going on around, and then applies this clever AI logic to avoid you getting into overconstrained situations or having too many constraints on a sketch, so you don’t have to do as much work and you can get to design much quicker,” Discher explained. “So it’s a pretty cool little tool, and some of the users ... are really raving about it.”

During the Realize LIVE 2020 event from Siemens, NX Product Marketing Manager Scott Felber and NX Design Product Manager Mike Yoder gave a presentation dedicated to the new tool. “The concept of sketching has been around in CAD for over 30 years. Every mechanical CAD tool on the market today has some form of sketching, and they’re all based on the same core concepts,” Felber observed. “So why, for many companies, do the majority of new designs start life like this?” he asked, referring to pen-and-paper drawing methods.

Current approaches don’t support easy iteration, Felber said: “They don’t allow you to change your mind and quickly adapt your sketch. They rely on you building in lots of rules and relationships to control the behavior.” The time-wasting repercussions of this type of setup are important because, according to Siemens, many users spend up to 15% of their time sketching. “We are delivering a new approach to sketching that has already been shown to reduce the average time users spend on capturing their ideas by over 30%,” Felber continued.

“[Sketch] anticipates what you want to modify, and the logical relationships of the objects that are related to that change. It allows you to quickly modify your designs and change the shapes you are creating. Importantly, as part of our open philosophy, it works on both data created inside of NX and imported data from other systems, working seamlessly with all of your data,” Felber concluded.

Yoder explained that the tool comprises three main aspects: a new sketch solver, a new user interface optimized for productivity, and “new technology never before seen in a sketching environment.”

New solver. There are no longer any constraints; instead, the solver automatically finds relationships between curves as geometry is created and modified, Yoder said. “The ability for the solver to automatically find relations removes the need for the user to apply any geometric-type constraints. The streamlined user interaction enables fast sketch manipulation and dimensioning. And the consistency you have whenever a sketch is part of a workflow such as layout, or when editing imported data, reduces time to task completion,” he pointed out.

“The solver goes into action when you create or select geometry in a sketch, whether it be a point, a line, or a curve. The solver instantaneously evaluates what is going on around your selection, and displays the relationships to neighboring objects,” he demonstrated. “This new solver alleviates the need to fully constrain sketches with antiquated geometric constraints, so the designer only needs to capture his or her design intent with dimensions. This leads to significant time savings with respect to fully defining a sketch profile. We’ve also added a streamlined workflow for creating and editing dimensions. And both relations and dimensions can be temporarily overridden when making a design change, if necessary for the workflow.” 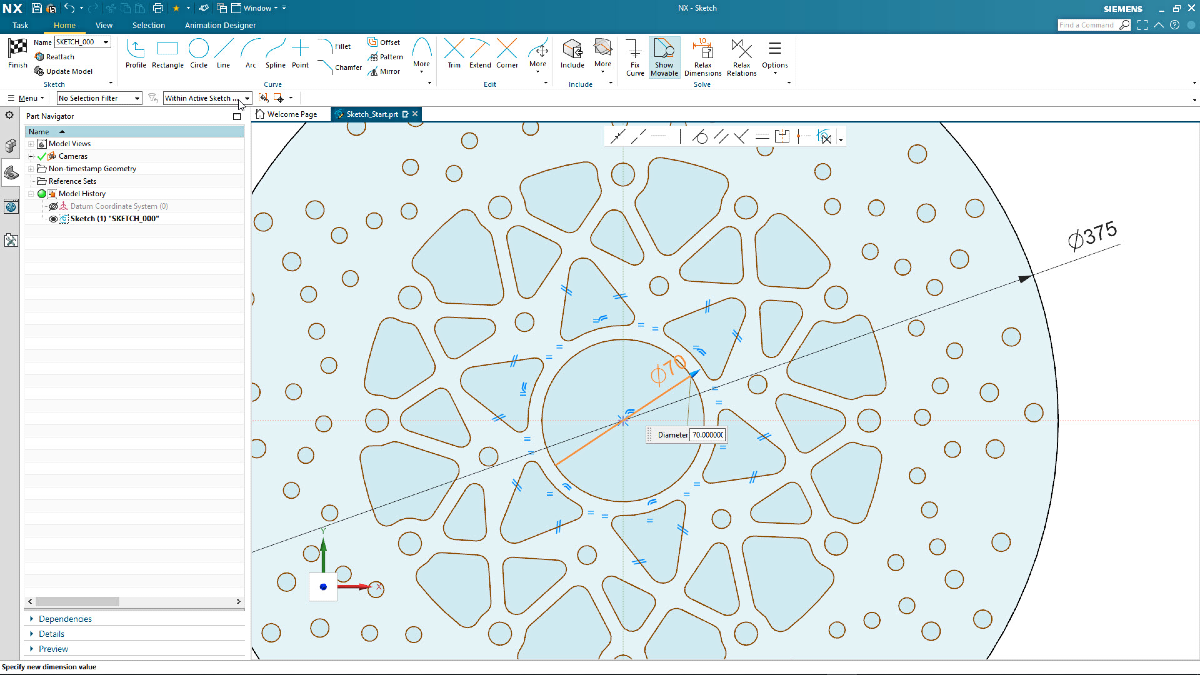 New user interface. “The new user interaction is almost exclusively within the graphics window. When you select a curve or endpoint, you are immediately presented with information about your selection. Whether it be dimensions or found relation, they appear immediately after selecting a curve or a point,” Yoder said. 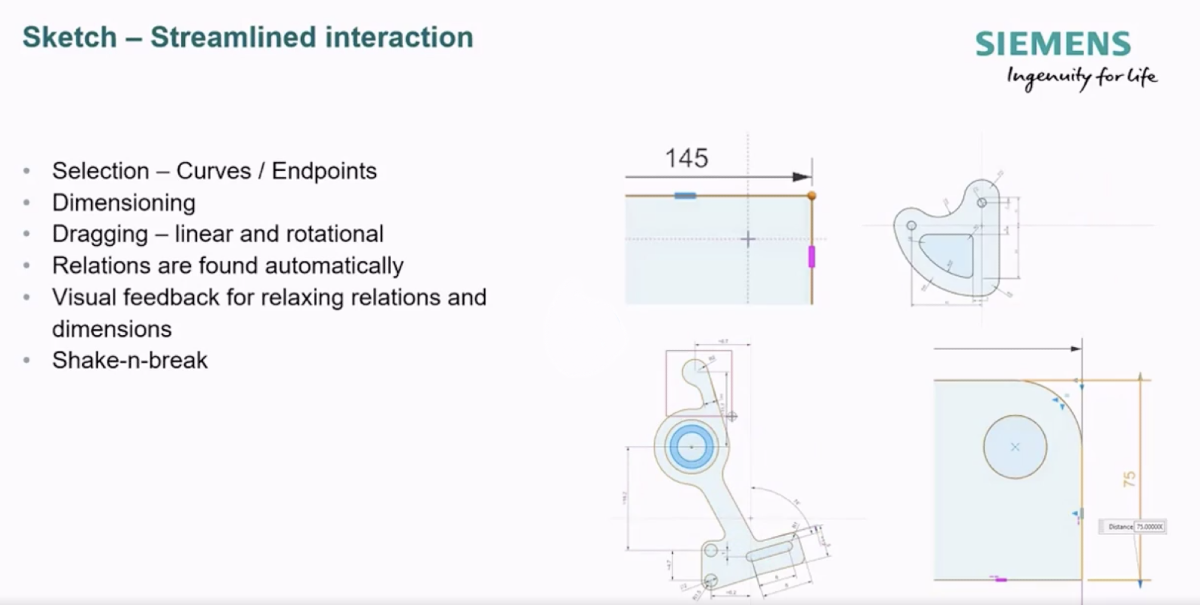 New capabilities. “In the new sketching environment, we have a far more dynamic and visual option called Show Movable,” Yoder said. “This new option color-codes the curves within the sketch profile to show which are currently movable, and they are defined as a brown color, as opposed to those which have been fully defined, and the design intent captured — these are shown in black. It is a dynamic option, and as you add more and more dimensions to your sketch, then more and more of the curves will turn black, indicating that your profile is fully defined,” he explained. “There’s also a new part navigator status, indicating the condition of the sketch, whether it is partially or fully defined, and this updates dynamically also.” 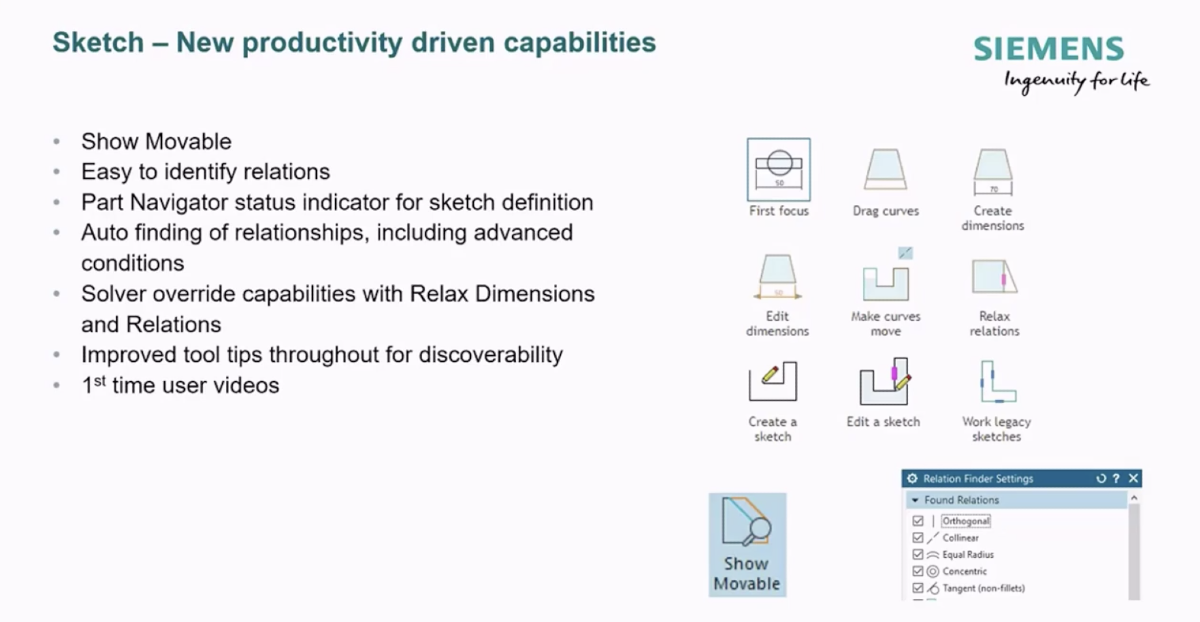 The Sketch technology is built into NX, and is included for customers who’ve updated to the current release of NX. (Existing customers can upgrade legacy sketches to the new solver.) Sketch will be available standalone, but not till later this year, Discher said.